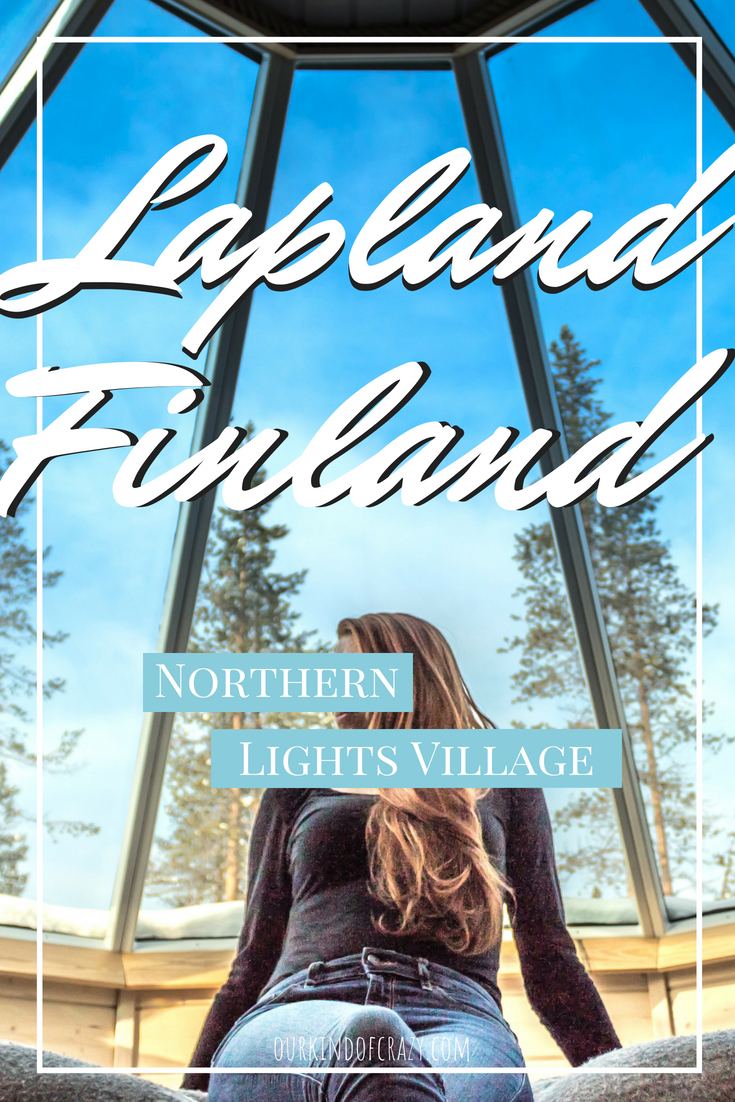 Where to stay in Saariselka, Finland
Northern Lights Village

After our stay in Kemi, Finland, we had a quick stop in Rovaniemi, and then headed North to Saariselka.  From the moment we stepped foot onto the property, it felt like home.  The staff was very personable, and a few became quick friends.   We took the bus from Rovaniemi to Saariselka, and had a little walk to get to the NLV.  A staff member from the resort saw us lugging our suitcase through the snow, and gave us a ride to the reception building.  We were a bit off course, so it would have been a bit of a walk.  (*Tip- there is a tunnel from Saariselka Village to Northern Lights Village, that makes the trip quick and easy).  That staff member set the tone for our stay there, as everyone we met was very friendly and helpful.

A quick check in at the reception/lobby, and we were headed to our Aurora (Glass) Cabins.  Picture perfect, igloo-looking buildings with a huge window showcasing the forest and sky.  Everything I wanted when we decided to head to Finland.  These cabins were so cozy, with a couch (that can turn into a bed), 2-twin beds (standard Europe 2-twins pushed together), and a nice heated bathroom as well.  The room is equipped with 2 heaters and an air conditioner.  We had no problems keeping warm.  In fact, it even got a bit too warm, and we were using our fan a bit. 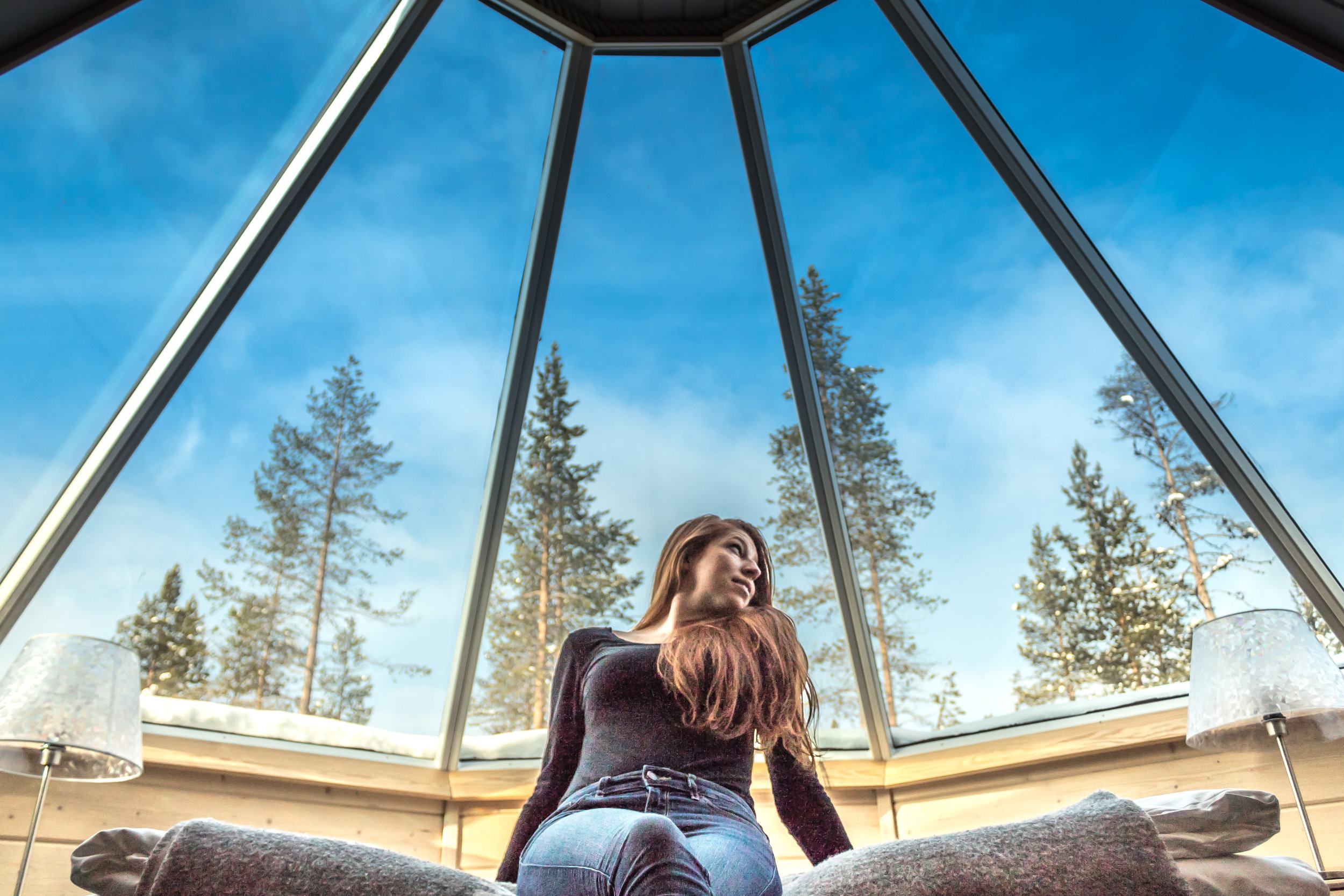 The view was amazing, and I just started praying we would see the Northern Lights.

What to do in Saariselka, Finland

Our first day there, we went on the Aurora Camp by the Lake tour. We were picked up at the lobby in front in a van and headed to get our gear on. We were the only ones on this tour, as another couple cancelled because they saw the clouds and decided not to do an Aurora Tour. Bad idea, guys!! I was bummed it was so cloudy and didn’t expect anything, but we saw them!

Tip* don’t expect not to see the lights just because it is cloudy!

We got dressed in the “overall coat and pants”, grabbed some gloves and boots, and headed out in the van. When we first looked at the tours, I thought Aurora hunting by car was going to be boring, so we skipped it…thankfully, we were in a van for this tour, and we were able to cover some good ground, and find an opening in the clouds, where we saw these beauties. 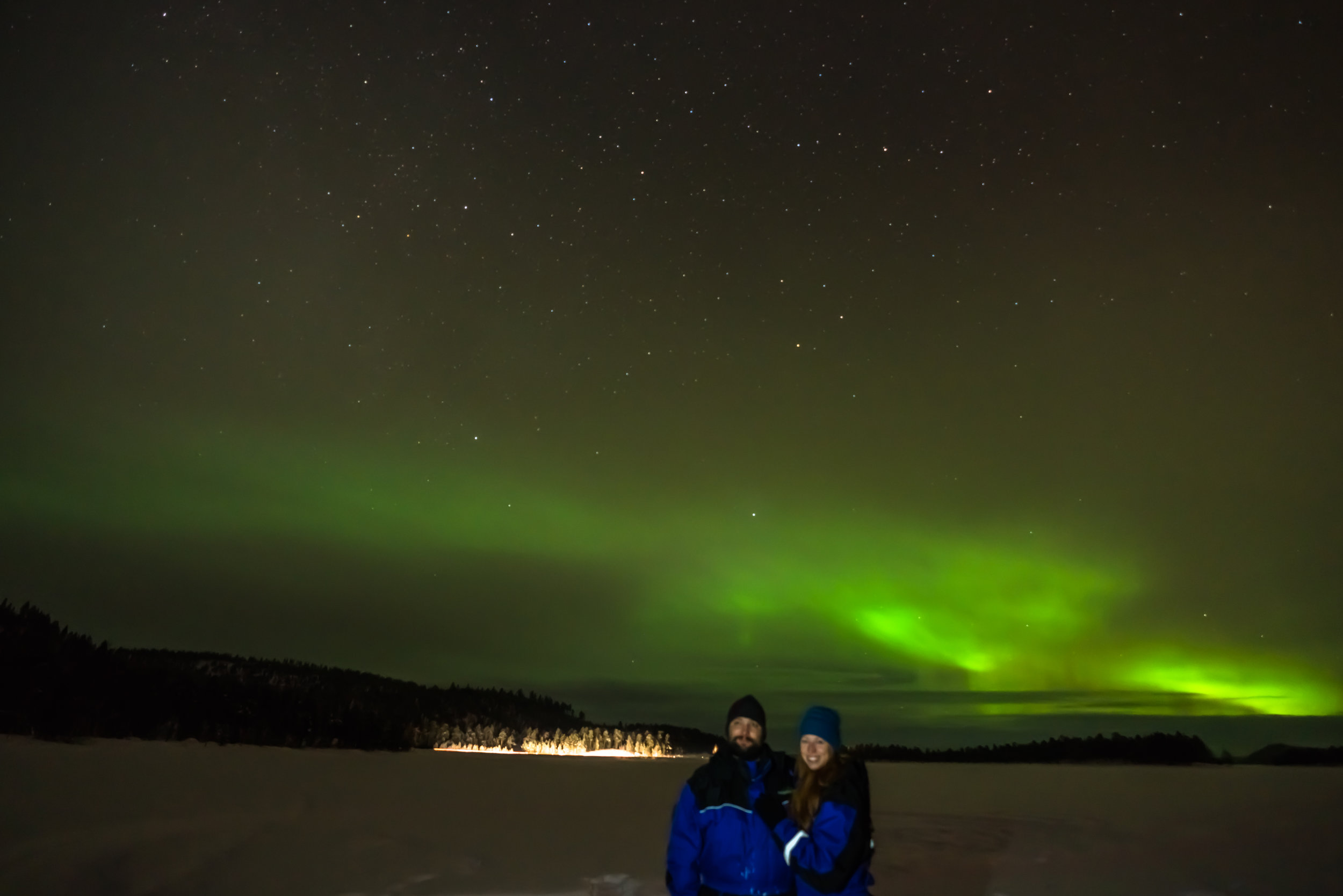 Now, just so you know, sometimes they have “lazy lights”, (or “boring lights” like the ones we saw in Iceland) where they look just barely green, and don’t move that much. These were them, but the pictures turned out great.

You can ask before, but they said sometimes a tour guide will bring their camera and shoot some photos on the tour, that you can purchase later.  Of course you can always bring your own camera like we did, and snap your own…don’t forget your tripod! 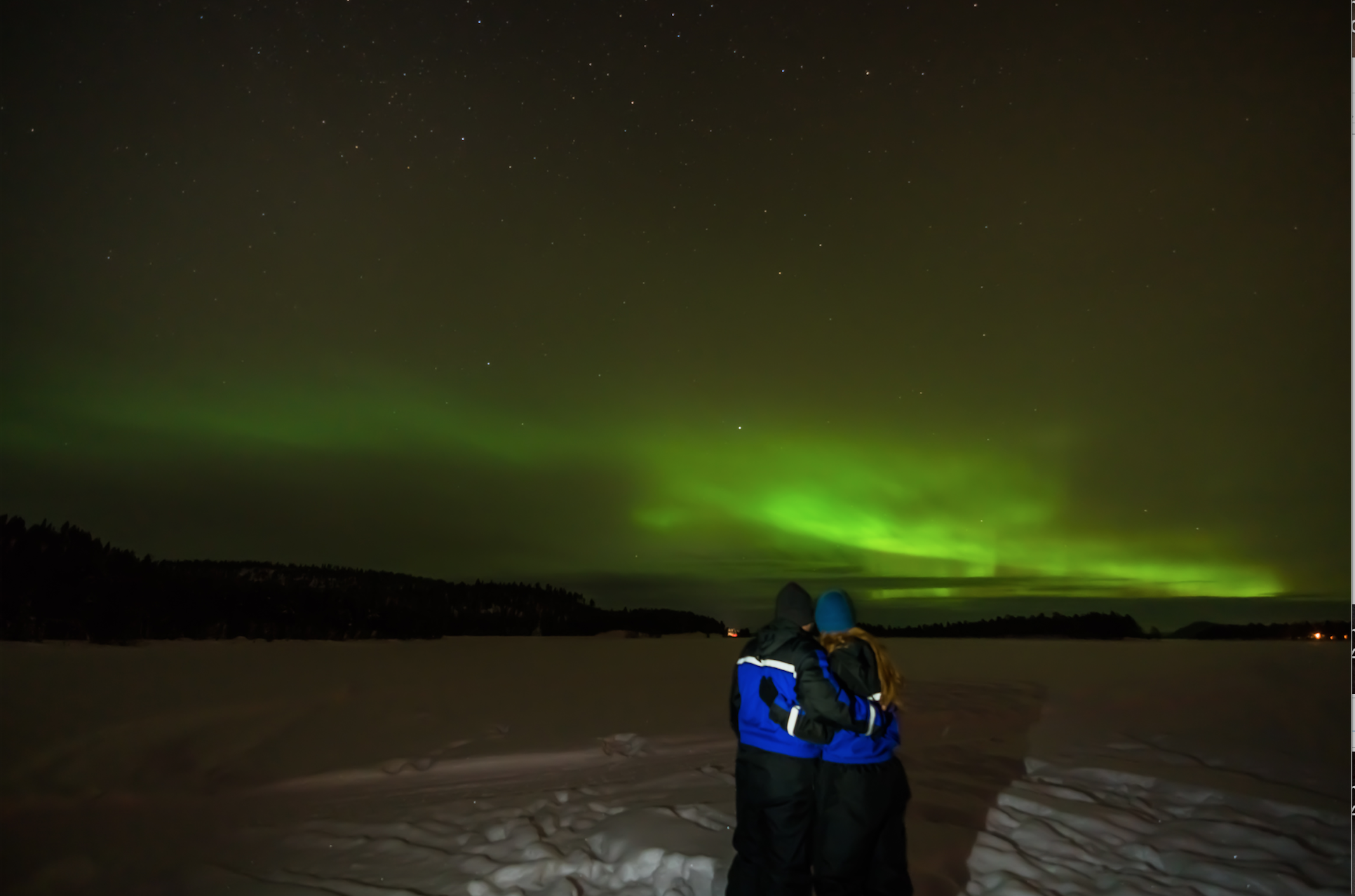 After we were good with the lights, we jumped in the van and headed out to another frozen lake, where they set up a campfire, and we relaxed in the hut, ate cookies and had our first taste of “hot berry juice”. (This was a crazy thing to me at first…hot juice?! But it was delicious and became something we looked forward to each excursion.)

B got some more pictures of the “lazy lights and we just relaxed, warmed up, and chatted with our new tour guide friends. When we got back to NLV, they dropped us off right at our room, so we didn’t have to walk from the lobby.

The next morning, we had a buffet breakfast in the lobby/reception/restaurant center. We had half board, so we had breakfast and dinner included with our stay. They had a variety of food, and 2 of the 3 mornings we had there, they had Nutella, so I was very happy! 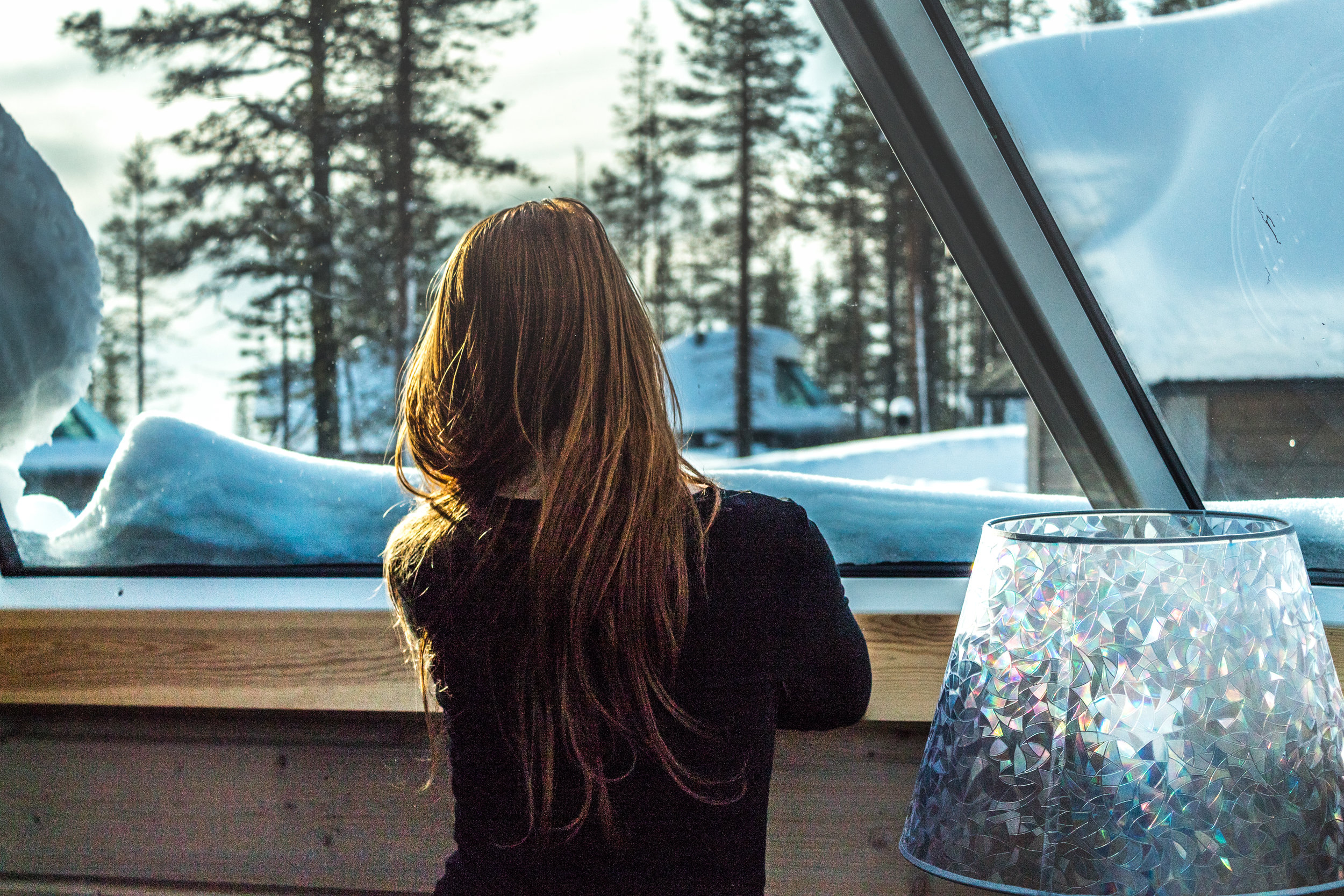 We booked a snowmobile and ice fishing trip for our first morning there. We held on to our overalls, gloves and boots for our whole stay, so we didn’t need to pick them up and return every day. This tour went out in a group of 8 people, and we drove the snowmobiles for a bit before coming to the frozen lake, where we learned how to ice fish. They even taught and let us cut out our own hole on the lake. Ice fishing is huge in Finland and definitely something I would recommend you try while you’re there. No one on our tour caught anything, but it was still a fun experience. We went inside a tent/hut where our guide made a camp fire, roasted sausages, and sandwiches, had some cookies, and of course, hot berry juice. It was a nice little lunch to warm us up before heading back on our snowmobiles. 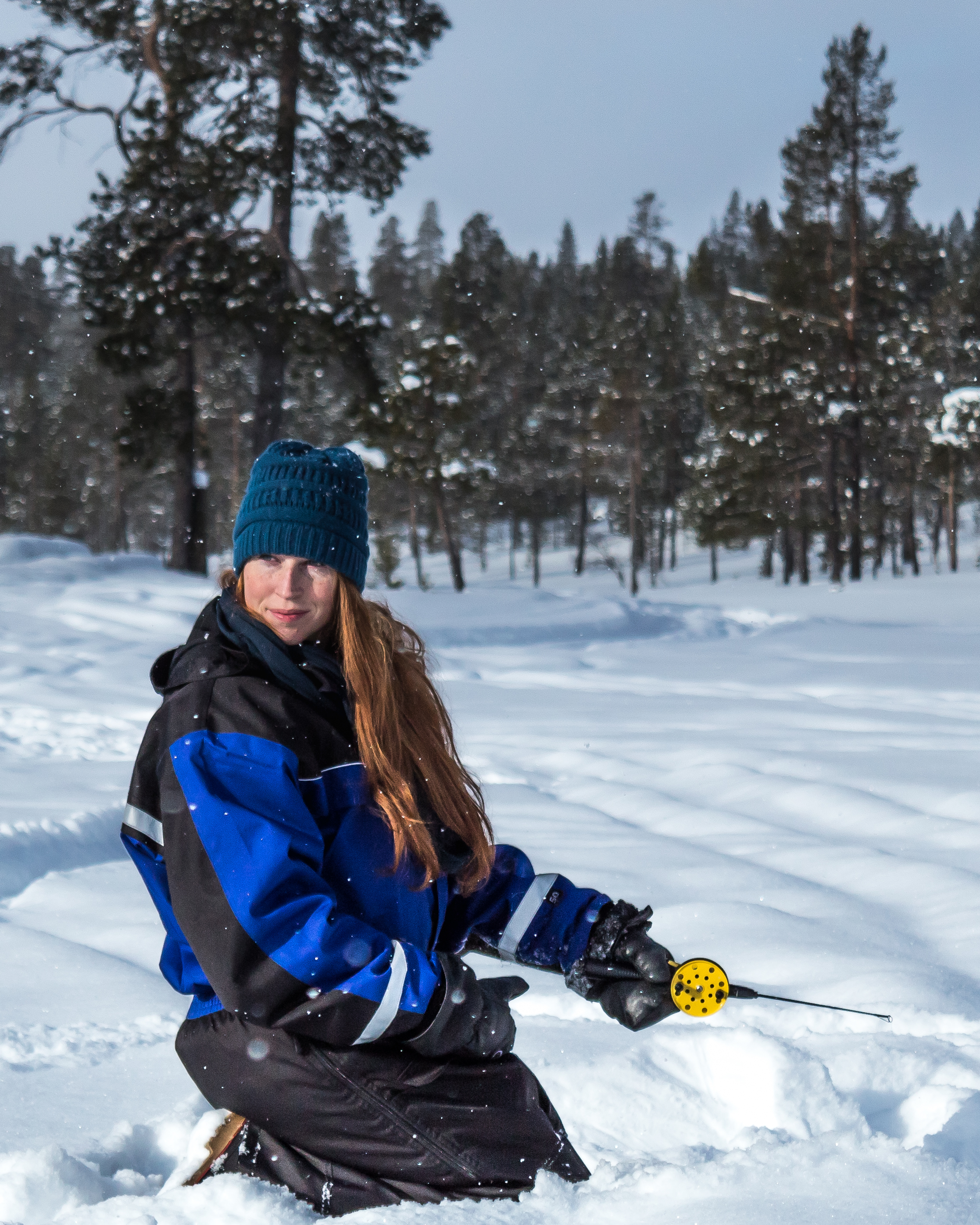 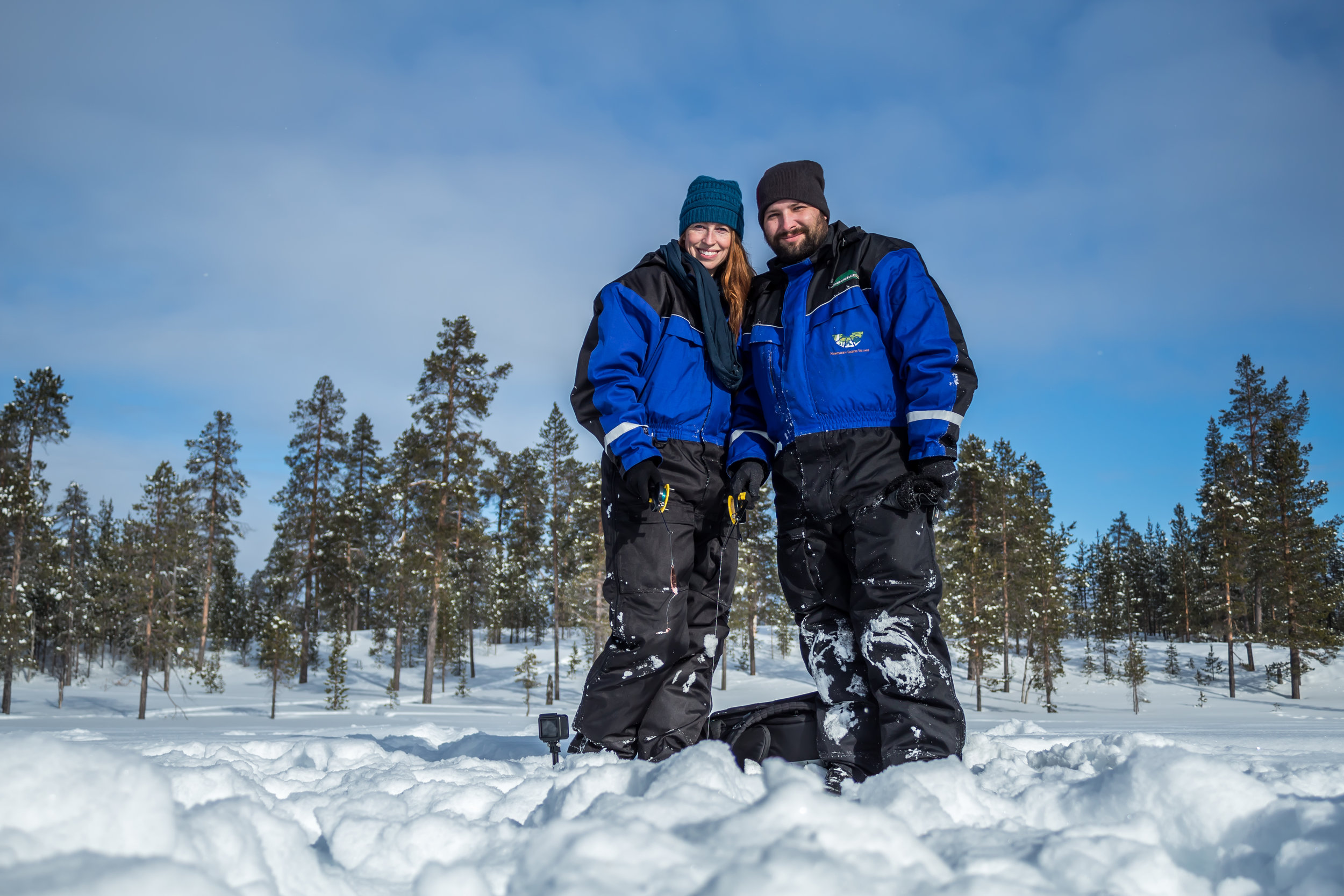 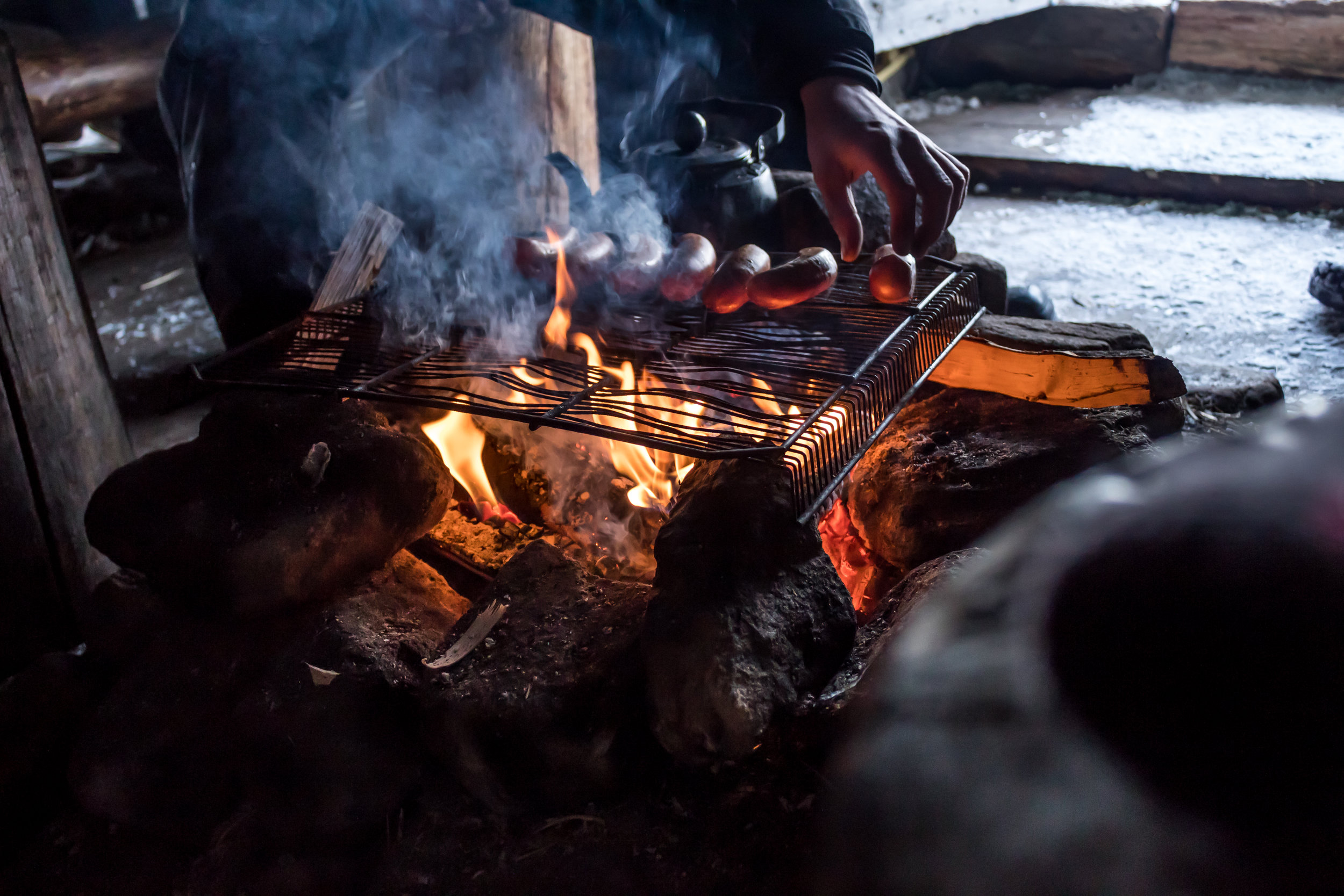 That night, we were booked for an “Aurora hunting with Snowshoes” tour, and I was almost that person who didn’t want to go, because it was cloudy…and really cold. But, lucky for us, we went with it, and guess what? Saw the lights! We hiked in the National Park, to get away from the clouds and light pollution, and ended up at a public building where you could see the Northern Lights. They were brighter than the night before, and was the first night we saw them dance a bit. 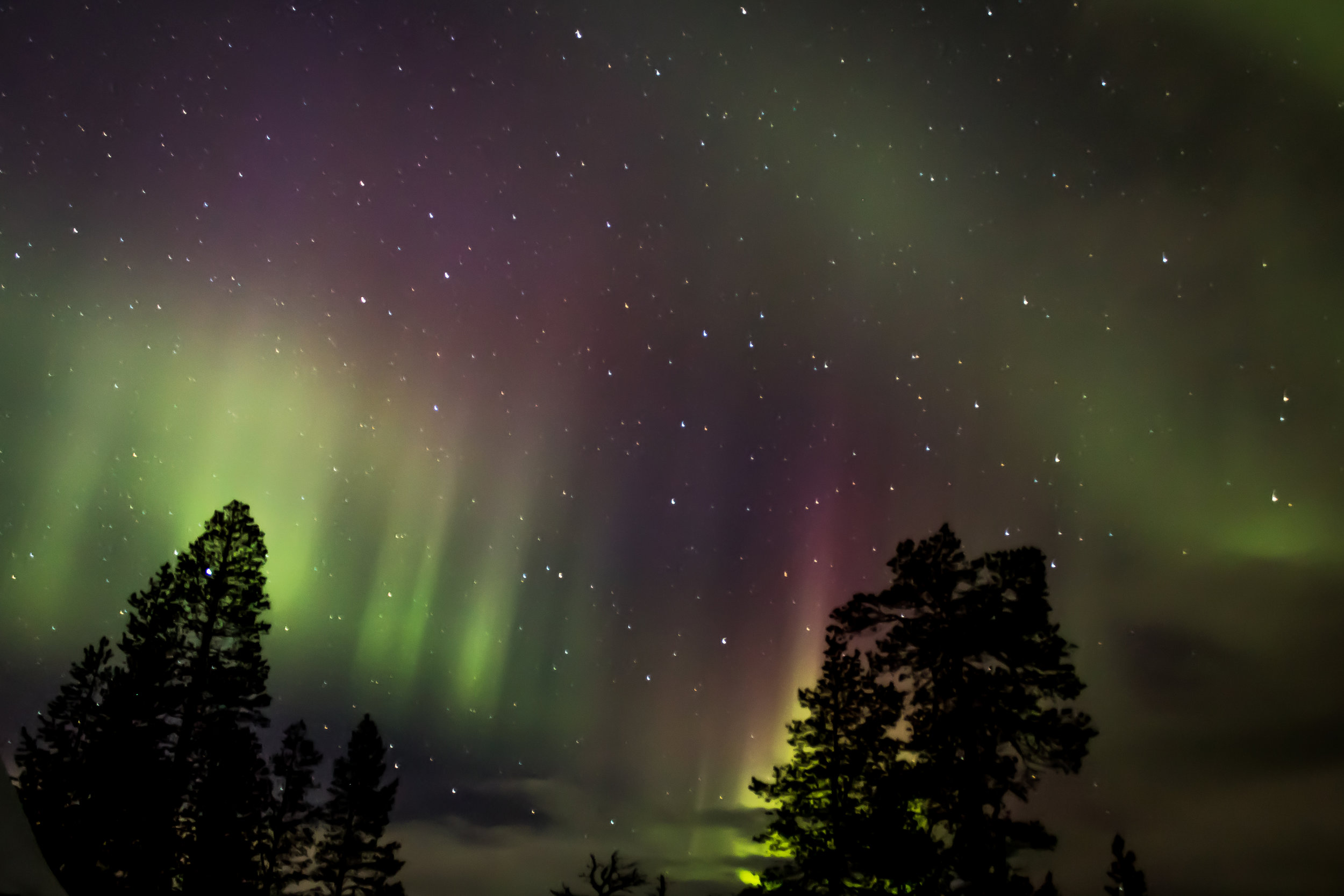 Of course it looks better on your camera, but we got to see a really bright green streak that looks like the pictures you see, but with the naked eye. So I was counting that as our best night with the lights. Little did I know, what was in store for the coming nights.

The next morning, we went cross-country skiing. This was one thing we weren’t too sure if we wanted to do it, but it’s huge in Finland, and even their children learn it in school. So…when in Finland… 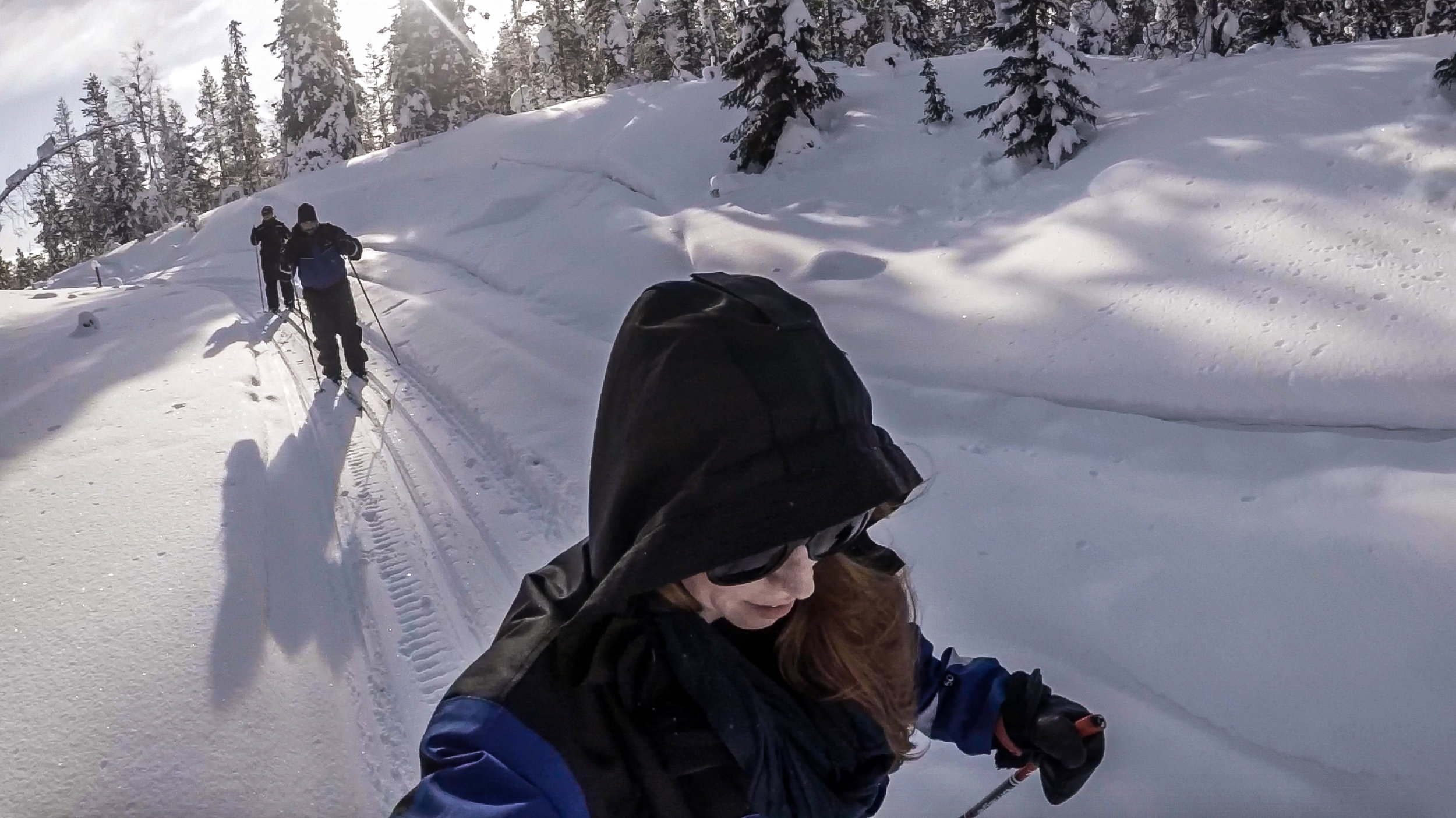 We chose not to wear too many clothes under our overalls (even though it was pretty cold) because we were told we would get hot. And boy, did we! Looking back, I probably would have opted for not wearing the overalls. It was definitely a bit of a task, cross country skiing. It took lots of energy and concentration to get all the way there and back. I fell once, going downhill (it’s barely even a downhill, more like a little slant.) because I couldn’t figure out the “braking” situation, but it was an easy fall. You stay on the path, and it helps guide your skis where you should go. I’d recommend this excursion if you want a work out for the day, for sure! 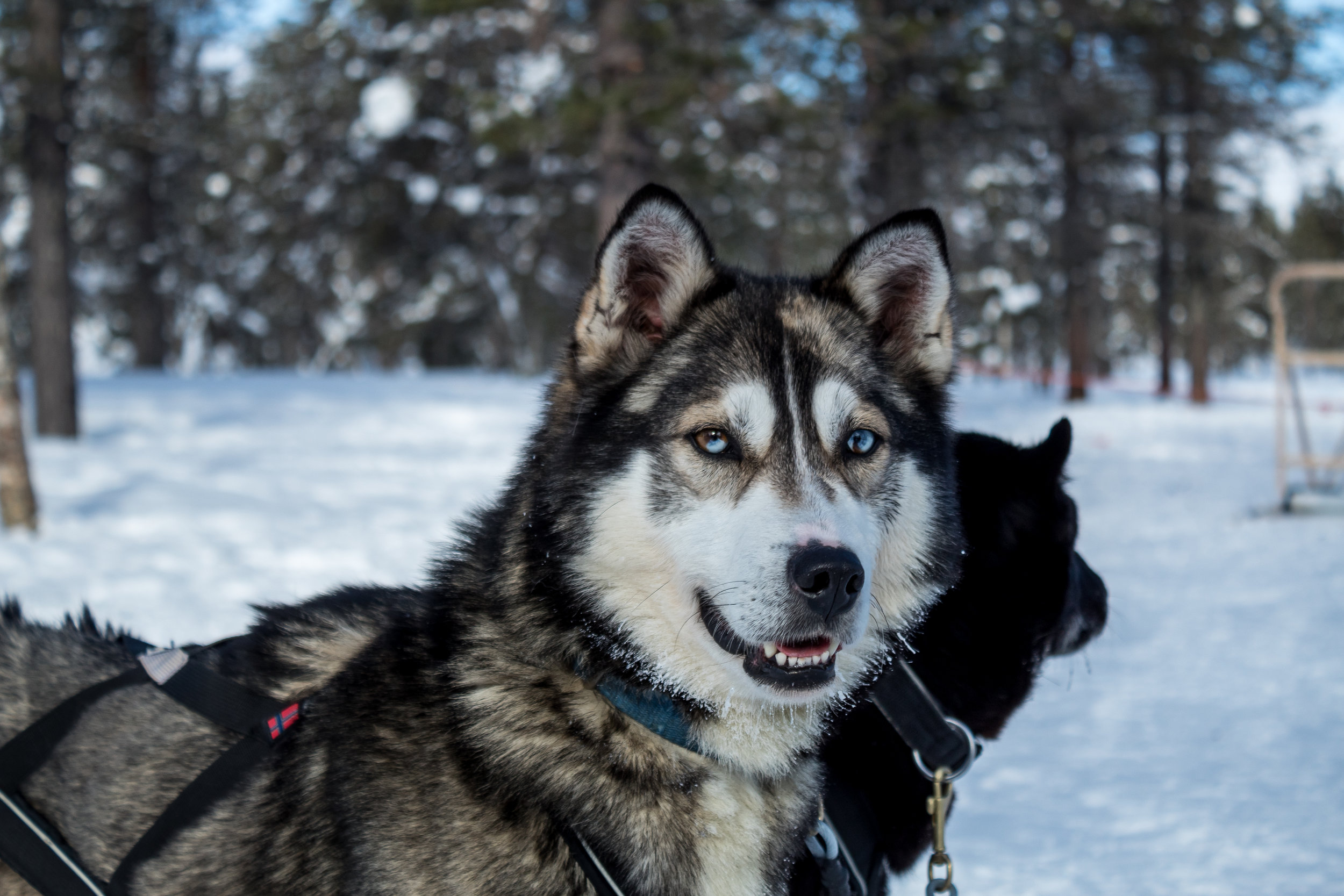 Finally, we had my favorite activity…our Husky Safari! Dog sledding is something I definitely wanted to try.  It’s a way they would get around in Lapland, back in the day. These people absolutely love their dogs, and their dogs love to run! As soon as they saw us coming, their tails started wagging, and they started barking. It was finally time for them to run. We asked lots of questions about the dogs, as we always want to be sure the animals are treated well. They own 100 dogs  total! And these dogs are switched out every day. This day, there were only 2 tours, and we were the second. As soon as they taught us how to sit in the sled, and the other how to drive, we were off, and the dogs couldn’t have been more excited. They took off running after each other, and went super fast. If you’re going up hill, you can help the dogs up too, so they aren’t straining trying to get up the hill. B and I got to switch off being the driver too. It was such a fun time. After, we got to play and cuddle the dogs. They were the sweetest! 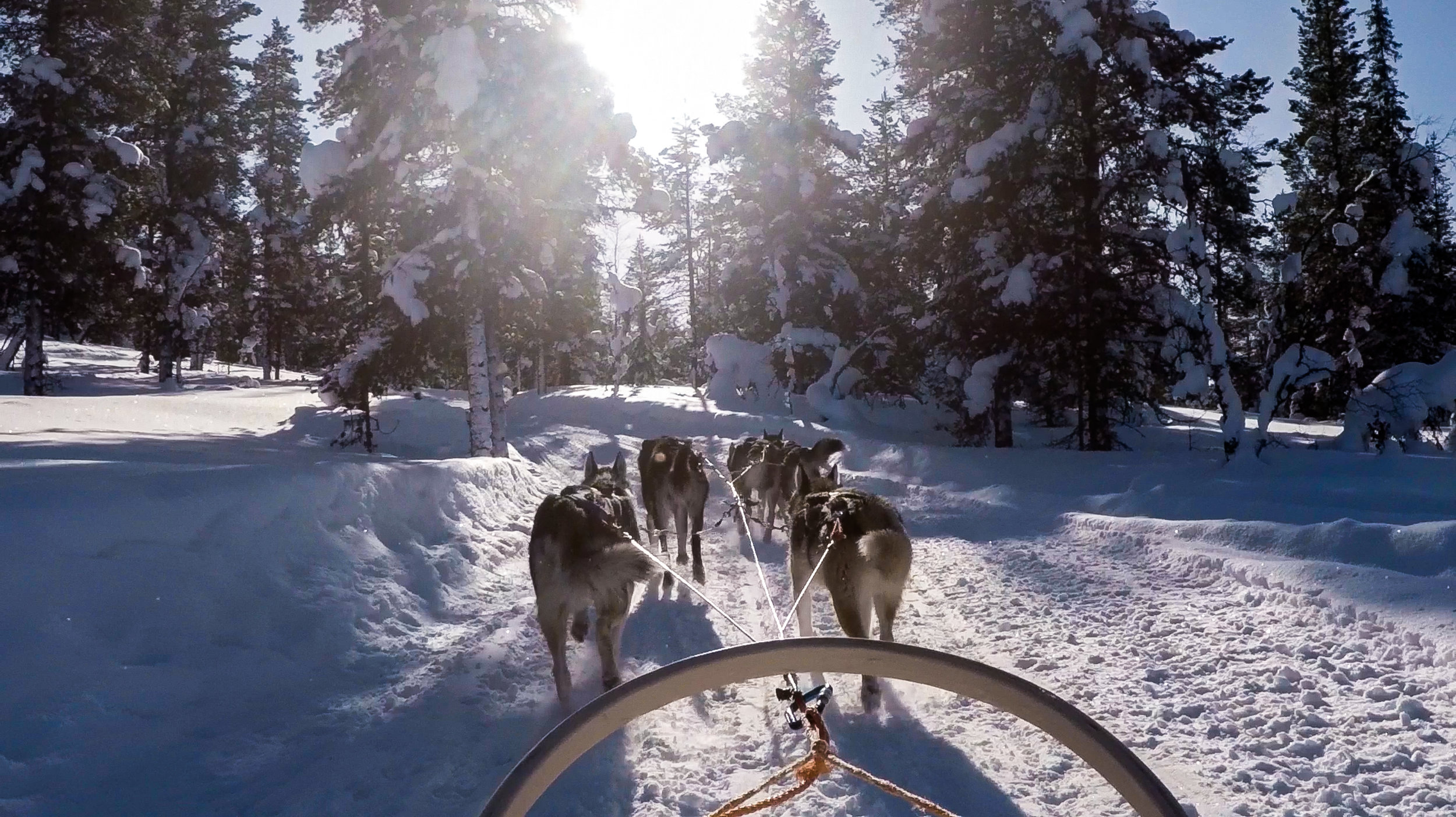 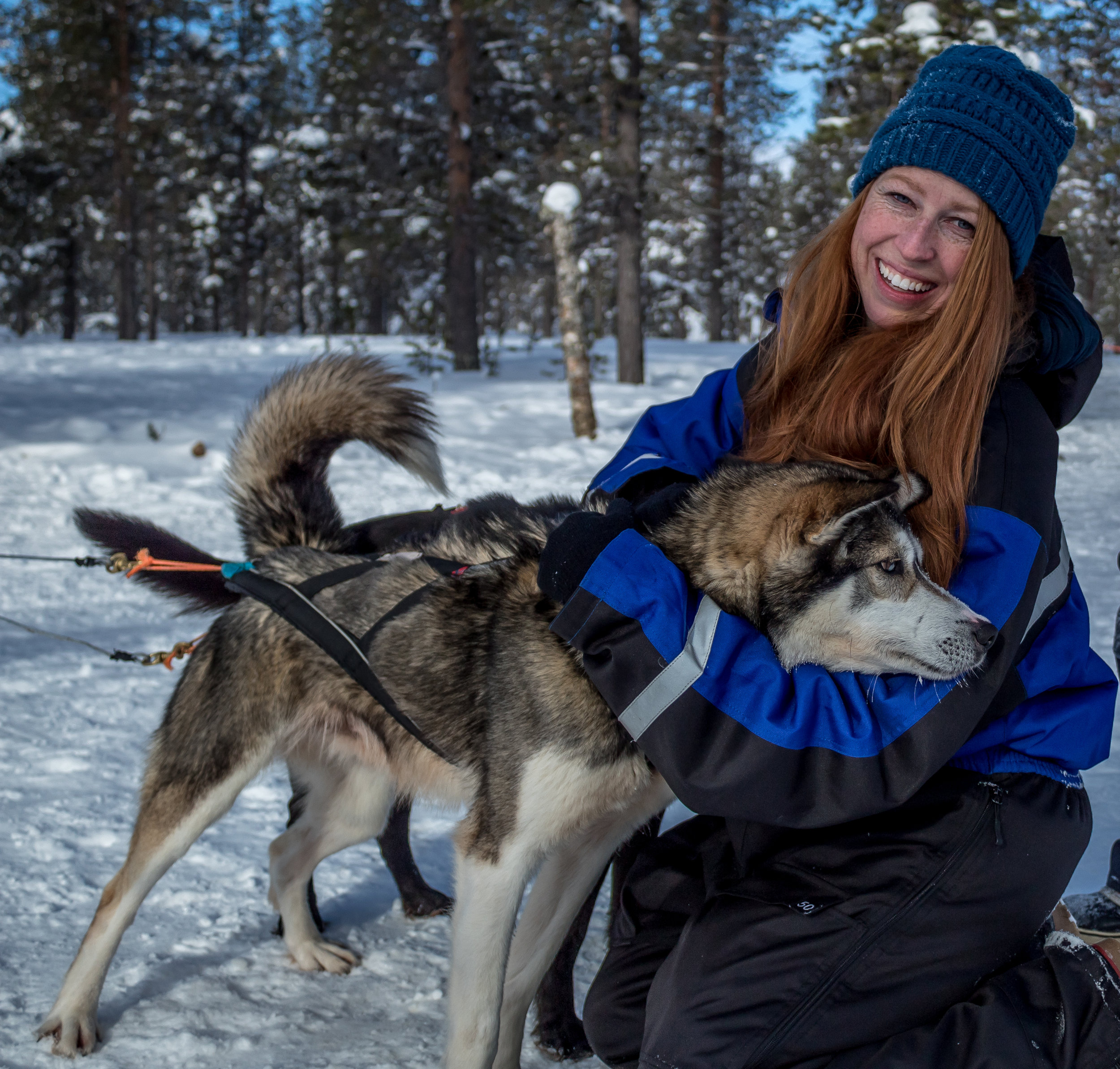 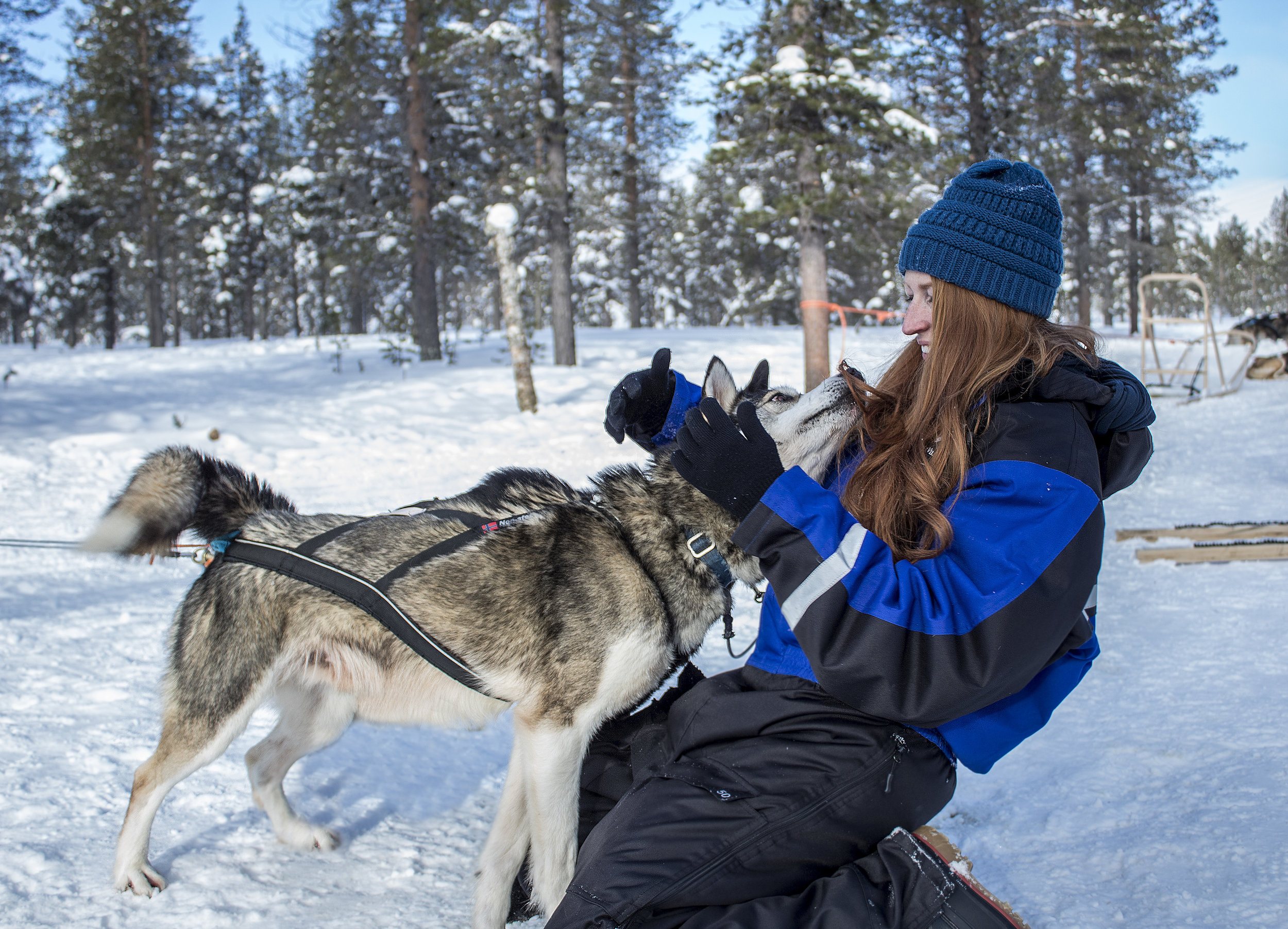 We had kept ourselves so busy with tours, that we barely had time for anything else. This was our first day that we were done by the afternoon, so we got to go enjoy the ice bar/ ice restaurant that is on the property. Anyone can go in to view it at no additional charge. You just pay for your drinks and dinner. If you’re already on half board, you only pay a little more instead of the full price. Since we did an ice restaurant in Kemi earlier, we didn’t do this one, but if you never have before, it’s definitely worth the experience. 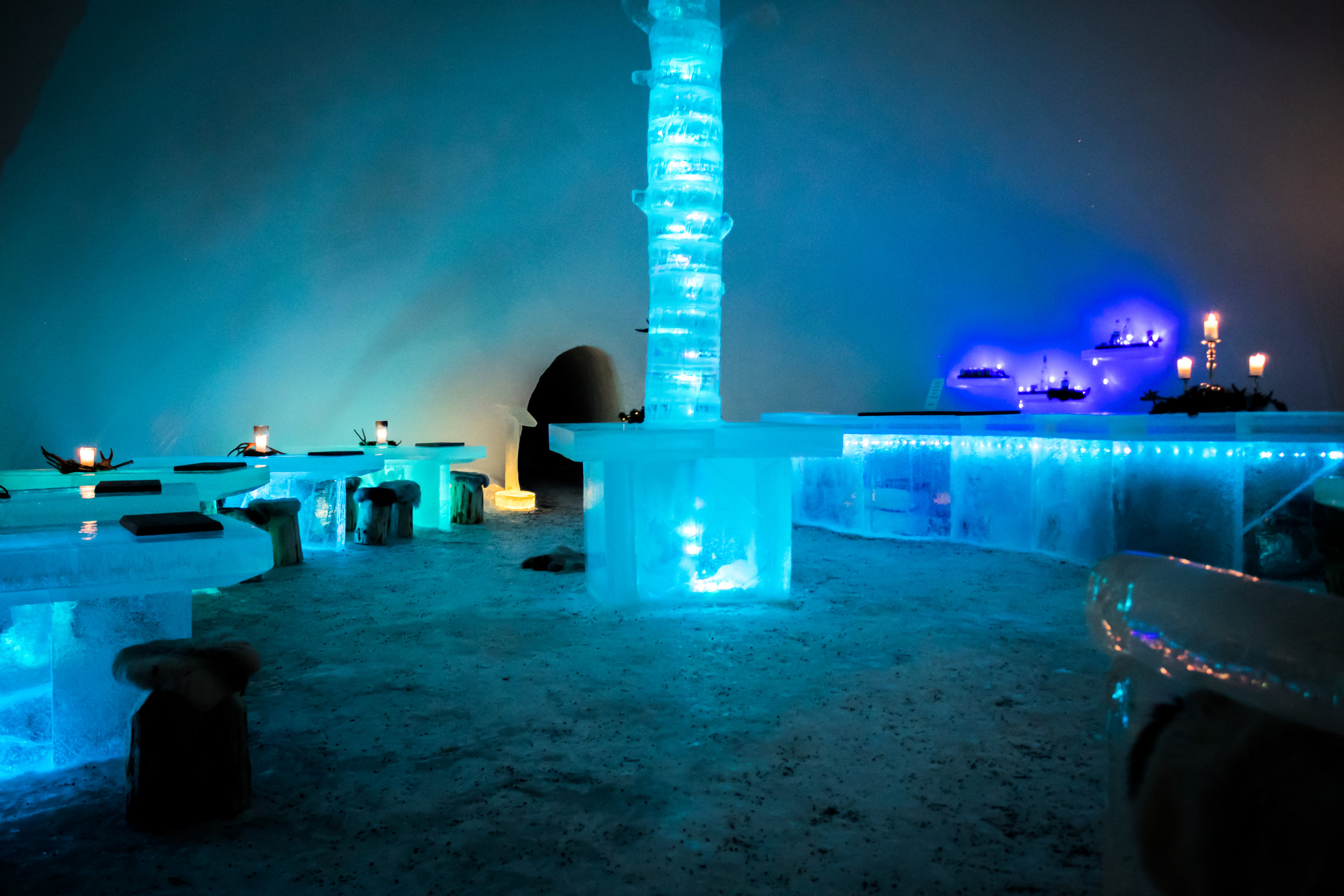 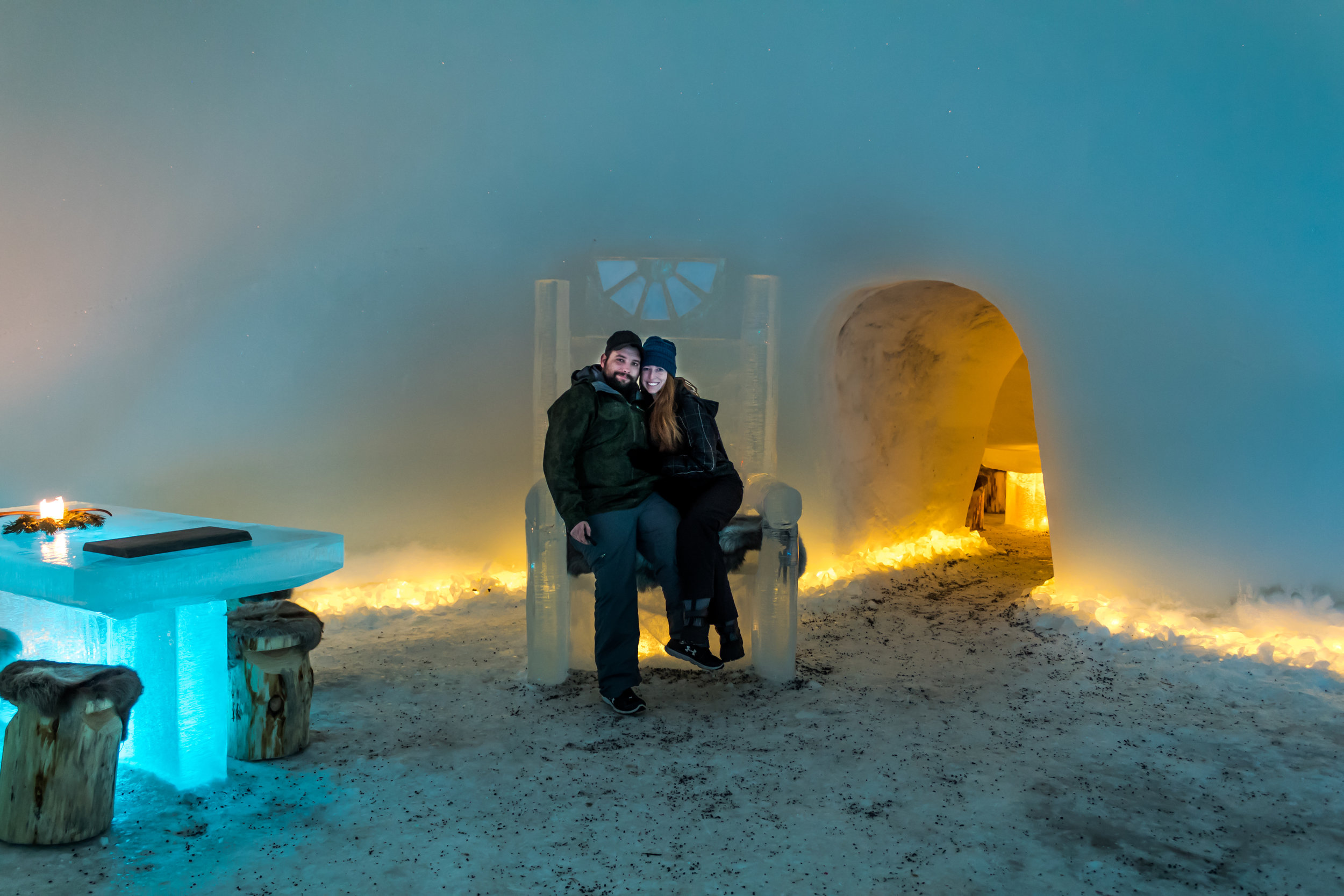 After dinner, we started our walk back to the cabin, and saw some amazing lights.  This was our epic Northern Lights show…where we said Northern Lights Village lived up to its name!  The color was phenomenal and it was dancing like crazy! We enjoyed it outside for a bit, but it quickly became too cold to stand out there. Which is the best part about NLV…the rooms give you the best view with the warmest “seat”. It felt like a dream. We just laid back, and watched the spectacular show. 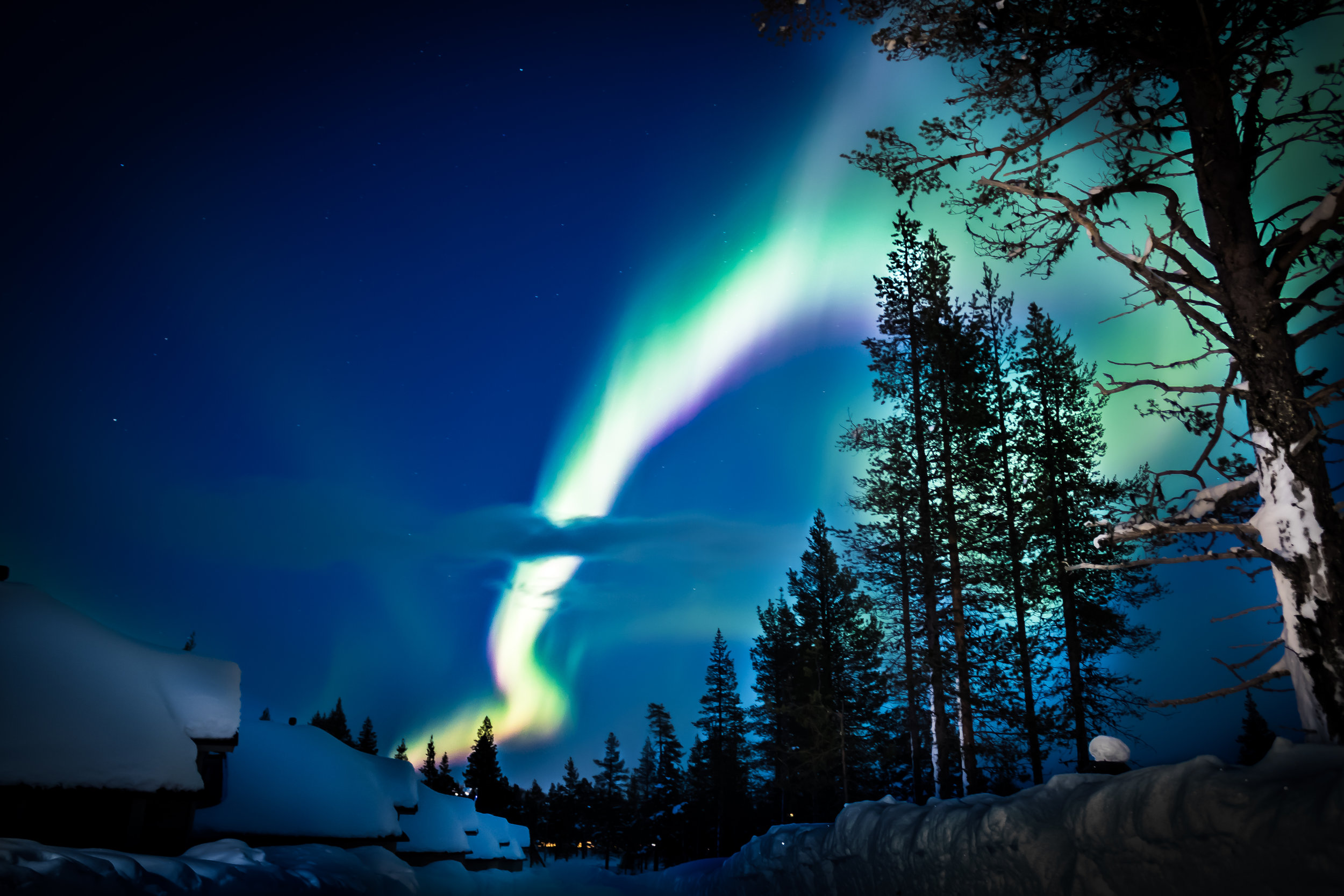 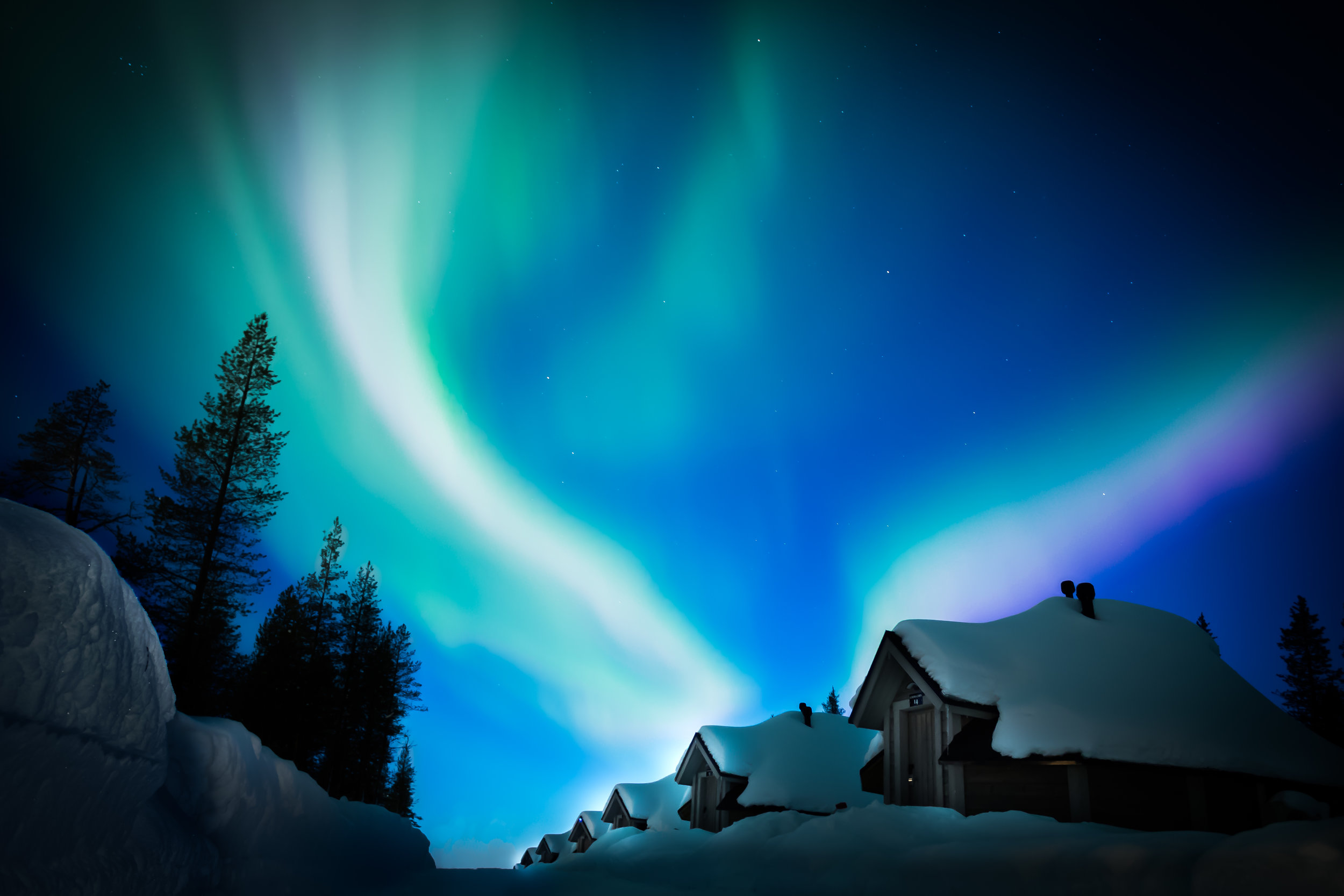 To be honest, I was kind of giving up on the Northern Lights, wondering if they ever looked in real life, like they do in the pictures, and this finally set the record straight for me. It was one of the most awesome things I had ever seen, and I am so grateful we were at Northern Light Village to witness it.

Couldn’t have been in a better place to see that show. 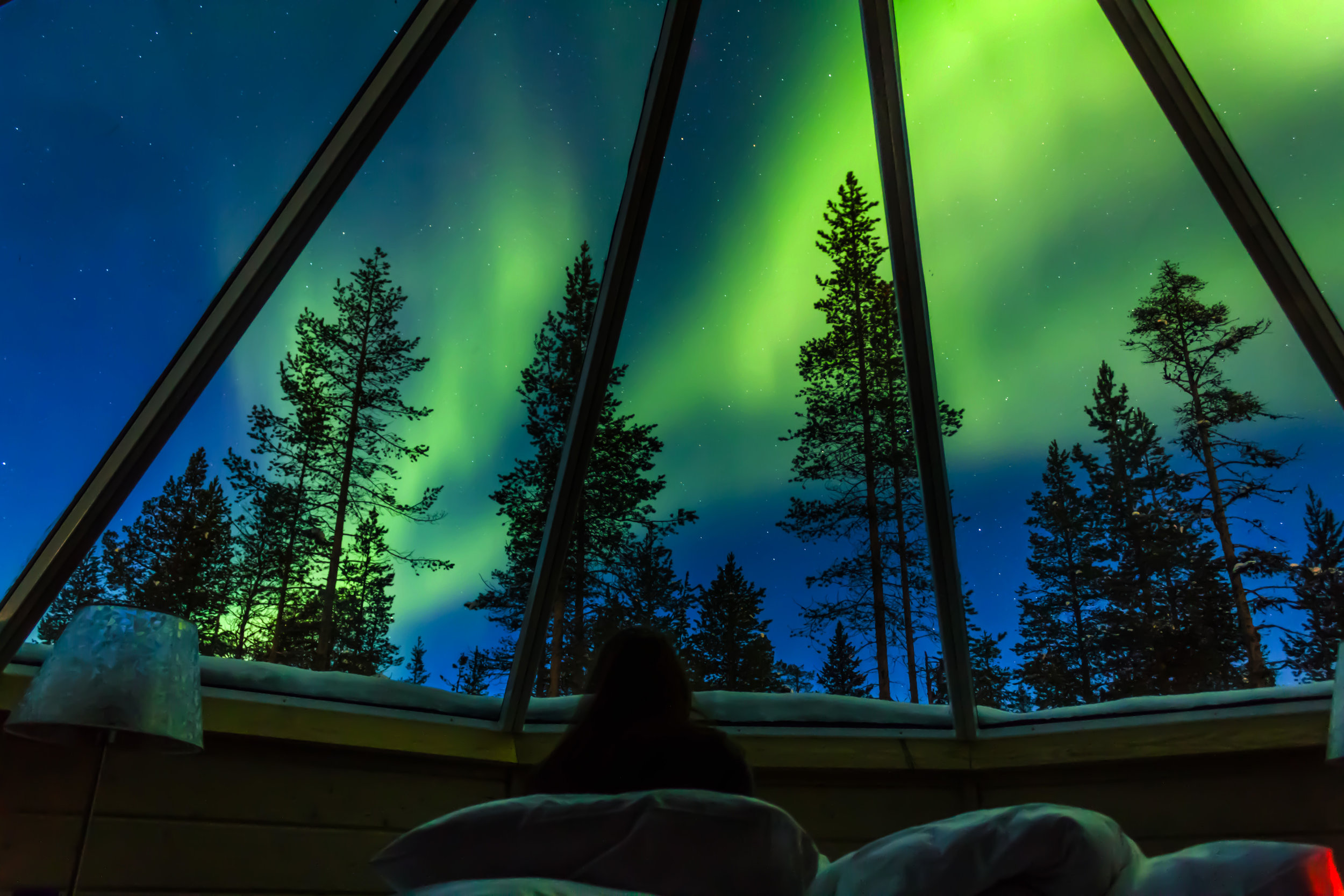 We were so sad to pack up and leave my favorite place, but we had to move north a bit to check out some other sights. Before we left, we did the Reindeer Express, which is a 25 min quick ride in a sleigh pulled by a reindeer. It was kind of like a kids pony ride, and wasn’t too exciting after all of our other tours there, but if you want to go see reindeer, you can check them out here too. 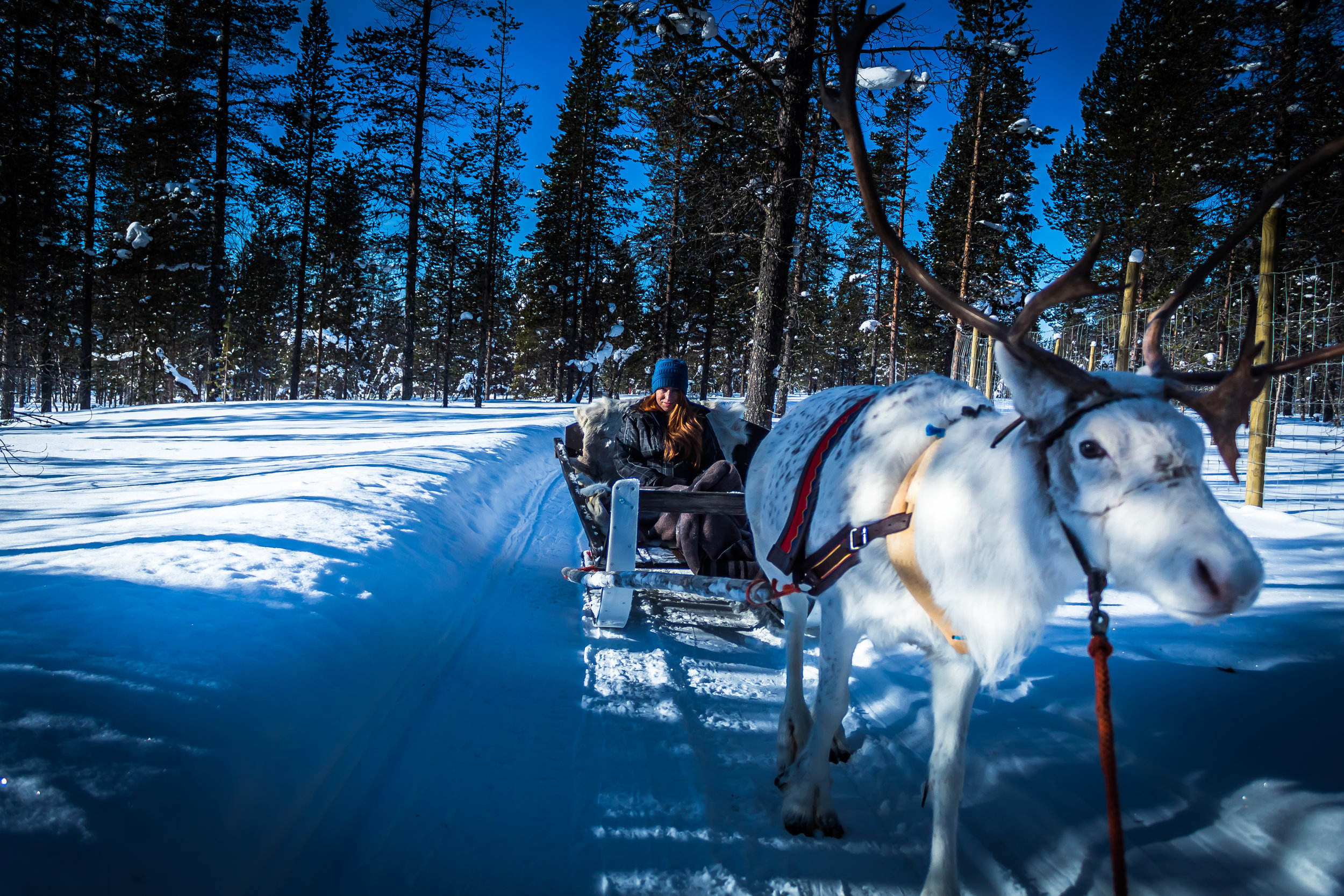 You can book your stay at Northern Lights Village here.

After we packed up, we headed even more North to Ivalo, and enjoyed one more week in Finland!

-There is a town right across the road, where you can check out the super market, or grab some food at the restaurants. We loved the burgers at a Muossi Grill, the night before we headed to Northern Lights Village.

-There’s a very convenient tunnel to connect you from the town to NLV, just ask the front desk to show you where to go. 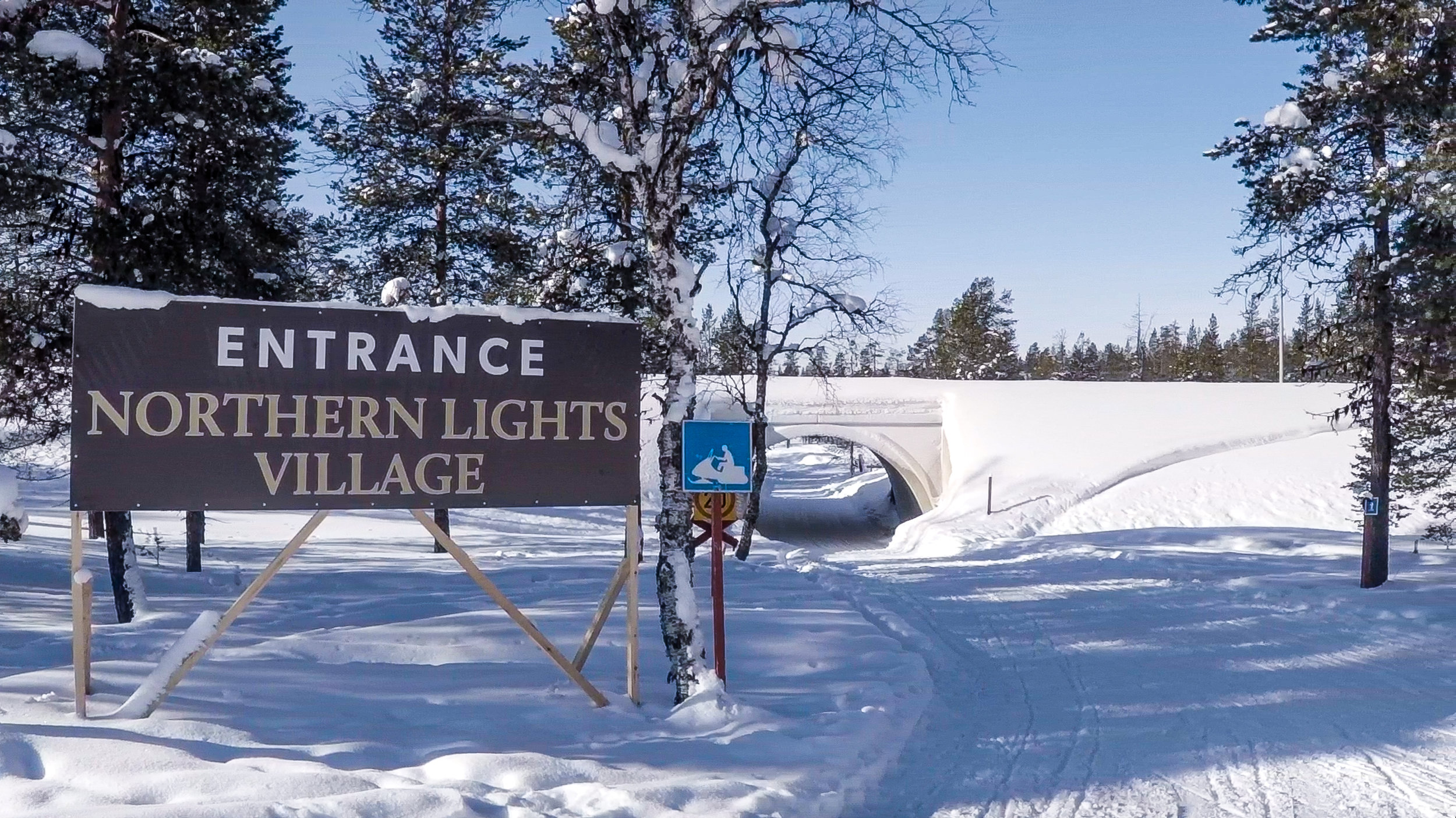 -The excursions provide you with the warm outer layers you will need. I was a bit worried I would freeze, because I didn’t own very warm stuff, but they took care of us.

-The internet was almost non-existent in our room. (They said they were having problems while we were there, so it may be a non-issue when you go). Not a deal breaker, since you’re on vacation, and should be enjoying the moments.  But, if you have work to do, it’s better to go to the lobby, where the connection is a bit better.

-There is a ski resort across the way that you can visit. It’s the Northern most ski slope in Europe. They have tobogganing, snow tubing, and of course skiing and snowboarding.

-Northern Lights Village also lets you use small sleds to take your luggage to your rooms, or ride down the hill in as well.

-It is near the bus stop, so should be easy to get there even if you don’t have a car.