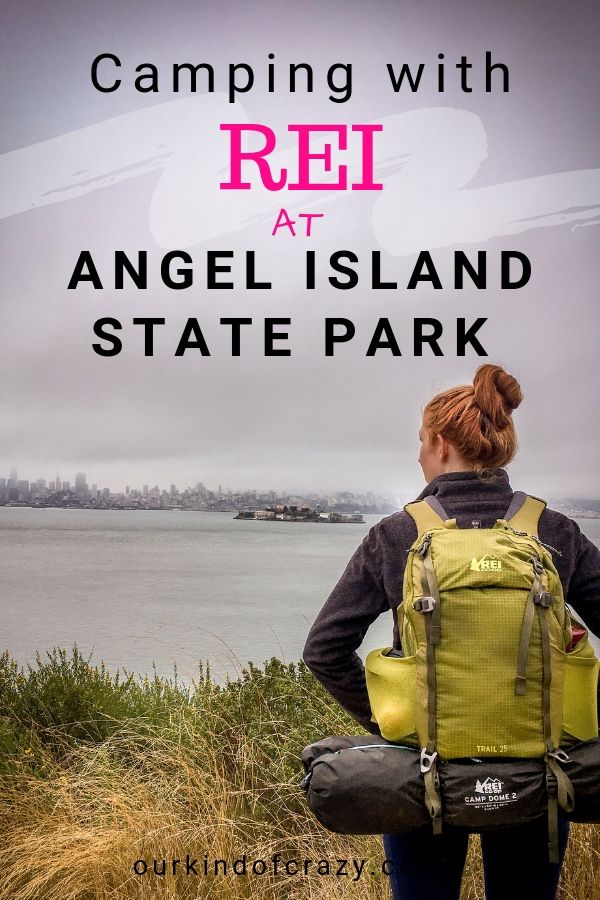 Camping in Angel Island State Park was such an awesome and unique experience. Camping on an island next to Alcatraz is not something you get to experience everyday. And our campout was even more exciting because we joined a hosted camping trip by REI, which means they took care of all the logistics for us. 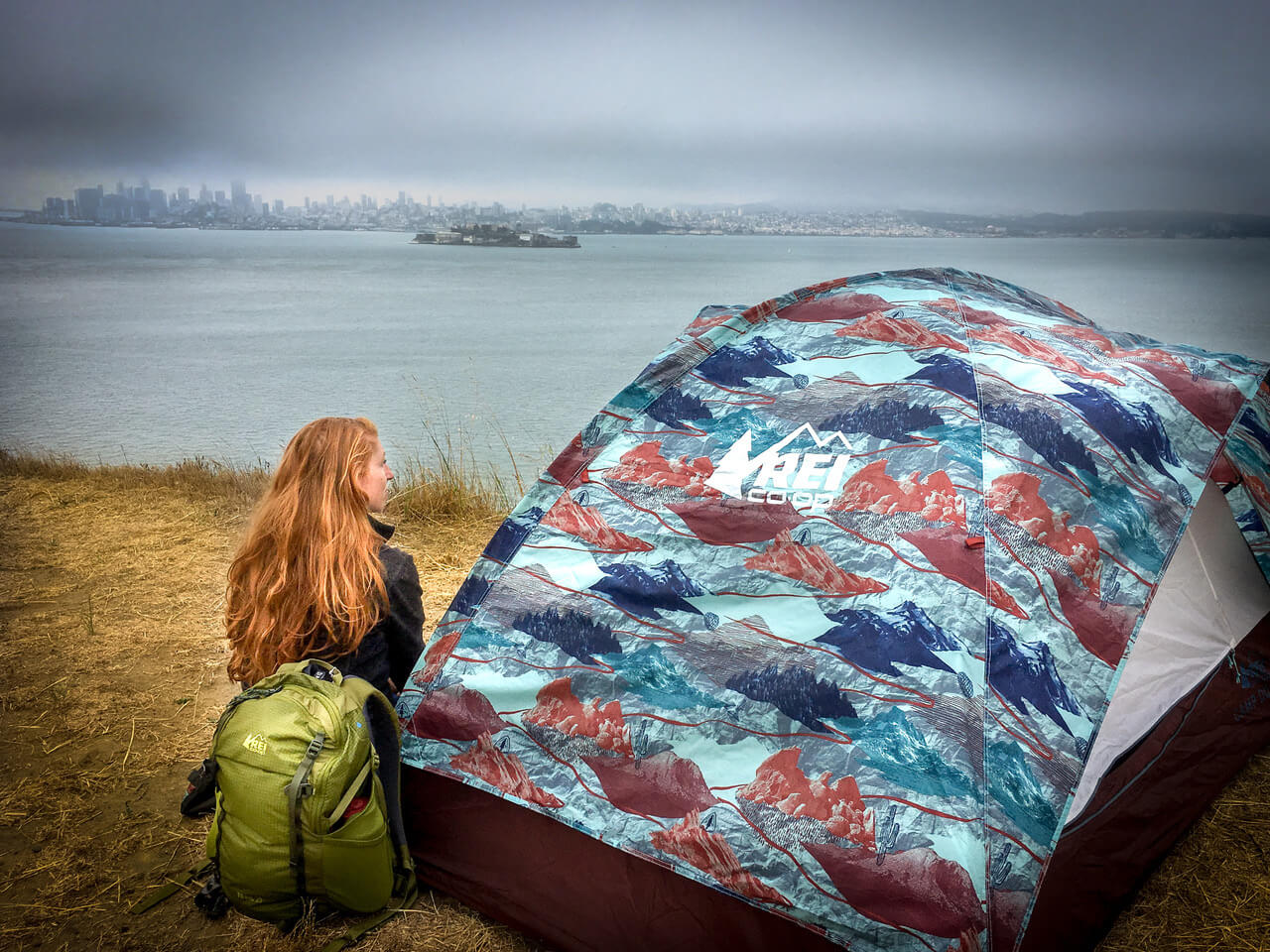 REI is constantly showing us that we can get outdoors no matter where we are. Angel Island State Park is an island in the San Francisco bay, right next to Alcatraz. When you think of San Francisco, you probably don’t think of camping outdoors. So camping in the heart of San Francisco Bay made us feel like we were in a whole other world. First you’re in the big bustling city and then you’re on an island in the middle of the bay on Angel Island State Park which ended up being an awesome place for an outdoor camping experience.

B and I booked our campout with REI online on the REI Campouts page and chose to check out the Angel Island State Park event.

We packed up on Friday night and headed to San Francisco on Saturday morning. Heading across the Golden Gate bridge we we able to see the island where we would be camping for the night. We parked our car in an overnight parking lot in Tiberon, and found the ferry to take us to Angel Island. The roundtrip ferry ticket was included in our REI Campout Package. 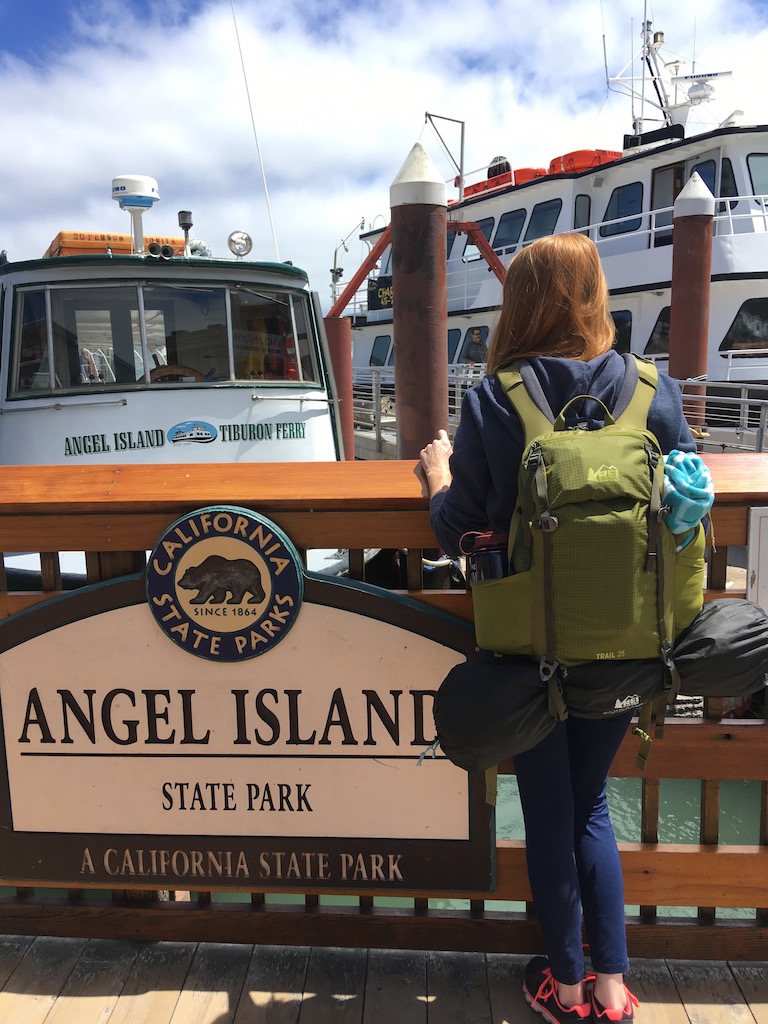 The ferry took around 5 minutes, and I could not stop taking pictures and enjoying the views of the city and the Golden Gate Bridge. We were so excited to see where we would be sleeping and see what our view would be for the night. 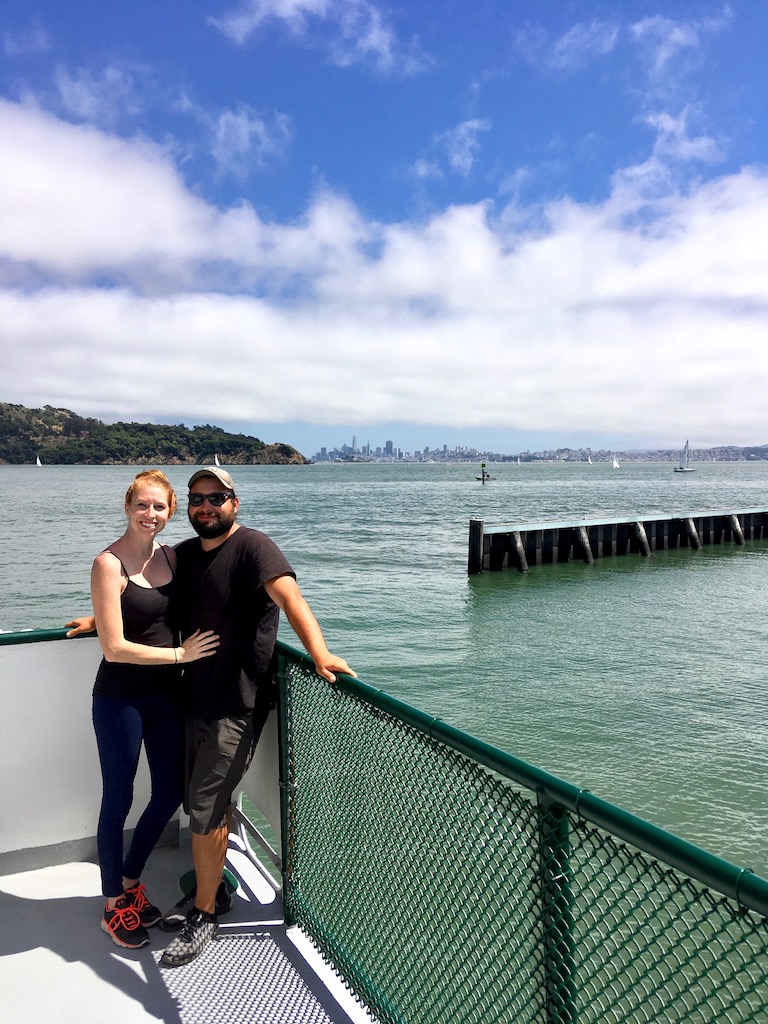 After we got to the island, we were greeted by REI staff at a checkin desk. We dropped off our luggage and they tagged it and sent it in a van, so we would not have to carry it all to the campground which was almost 2 miles away. 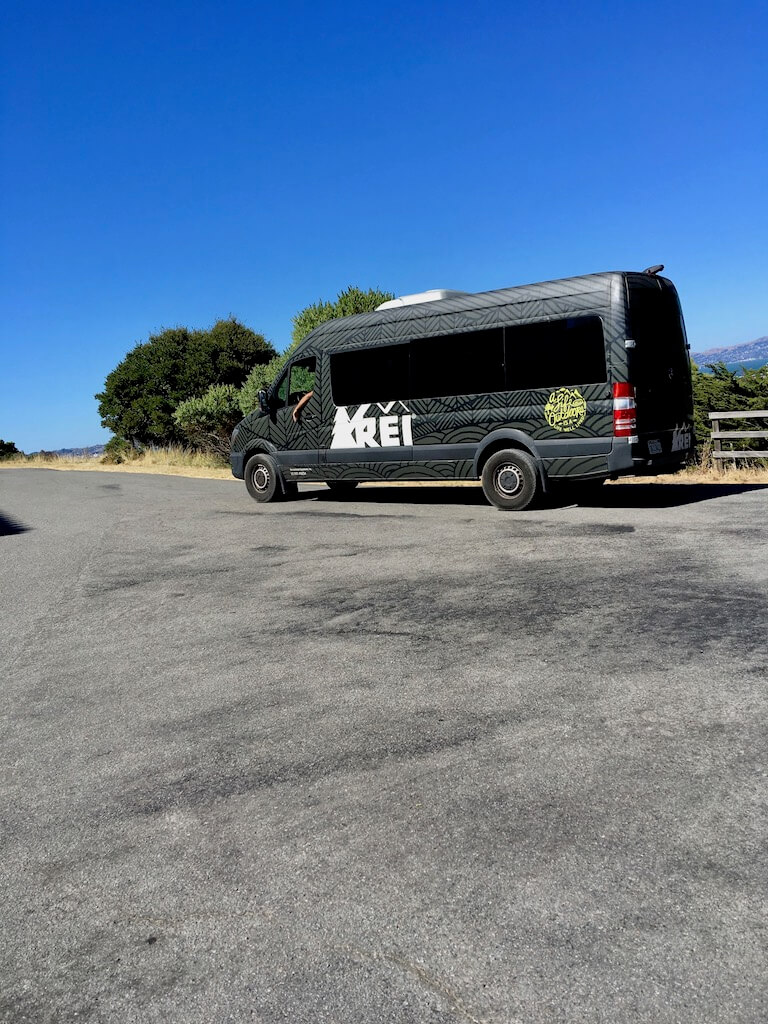 Before heading to the campsite, we were able to grab a drink, play corn hole, and get to know some of the other campers.

We were excited to get to the campsite, so we took off on the 2 mile hike around the island. The hike there was so beautiful and we could not get enough of the amazing views of the city. And of course I took loads of pictures! 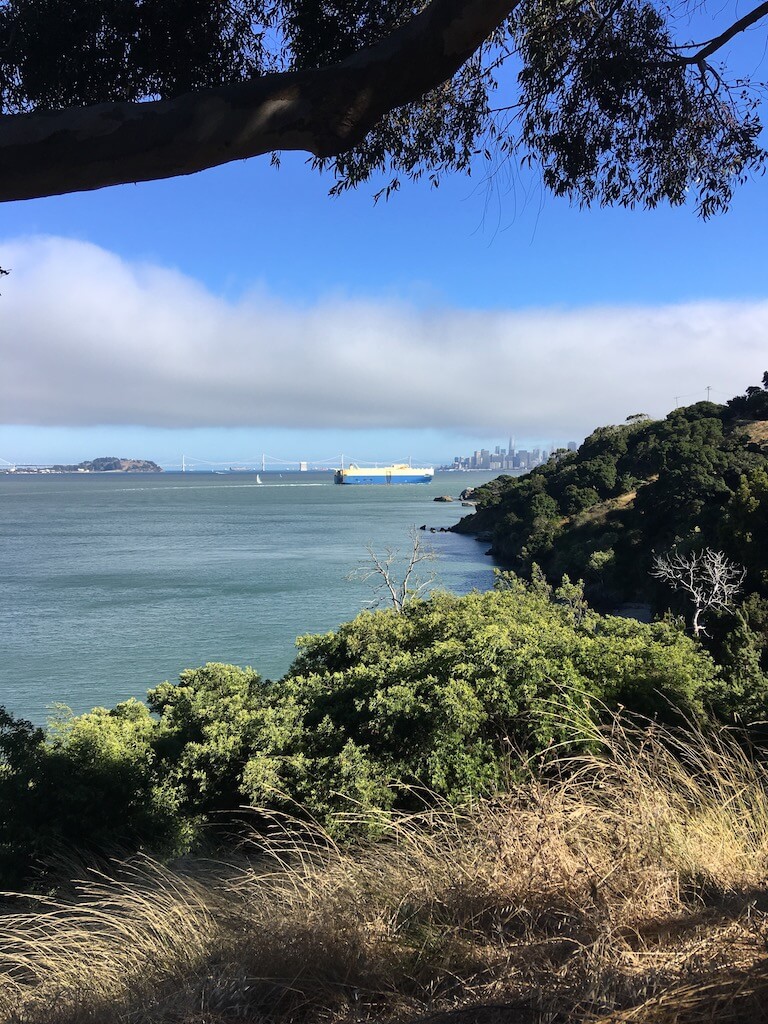 Once we got to camp, there were lots of tents already set up. The cool thing about this campout was you could show up when it was convenient for you. There were many different groups of people at this campout. Lots of families with kids, couples, single parents, some campers who were practicing for a backpack trip, etc. It was neat to see all the different types of adventurers and hear how a campout like this was perfect for them. 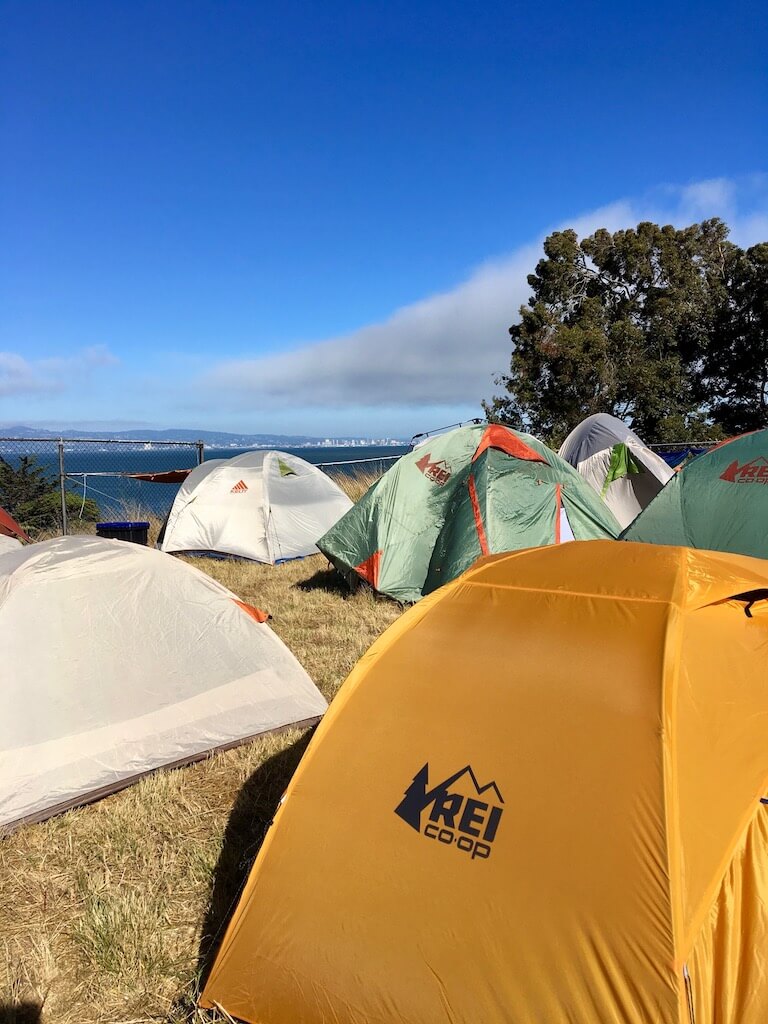 We decided to check out the area before we went to grab our camping gear. There were booths set up for everyone to enjoy on the other side of the tents. We headed to the Donner booth and made leather bracelets using scraps from Portland factory, with our own engraving, “OptOutside”. We used a hammer and stone to press each letter into the bracelet. They had several different options for what color bracelet you wanted to make, and they had them fitted to our wrists as well. It was a hit for the campers, as we noticed the tables were constantly filled with new campers. 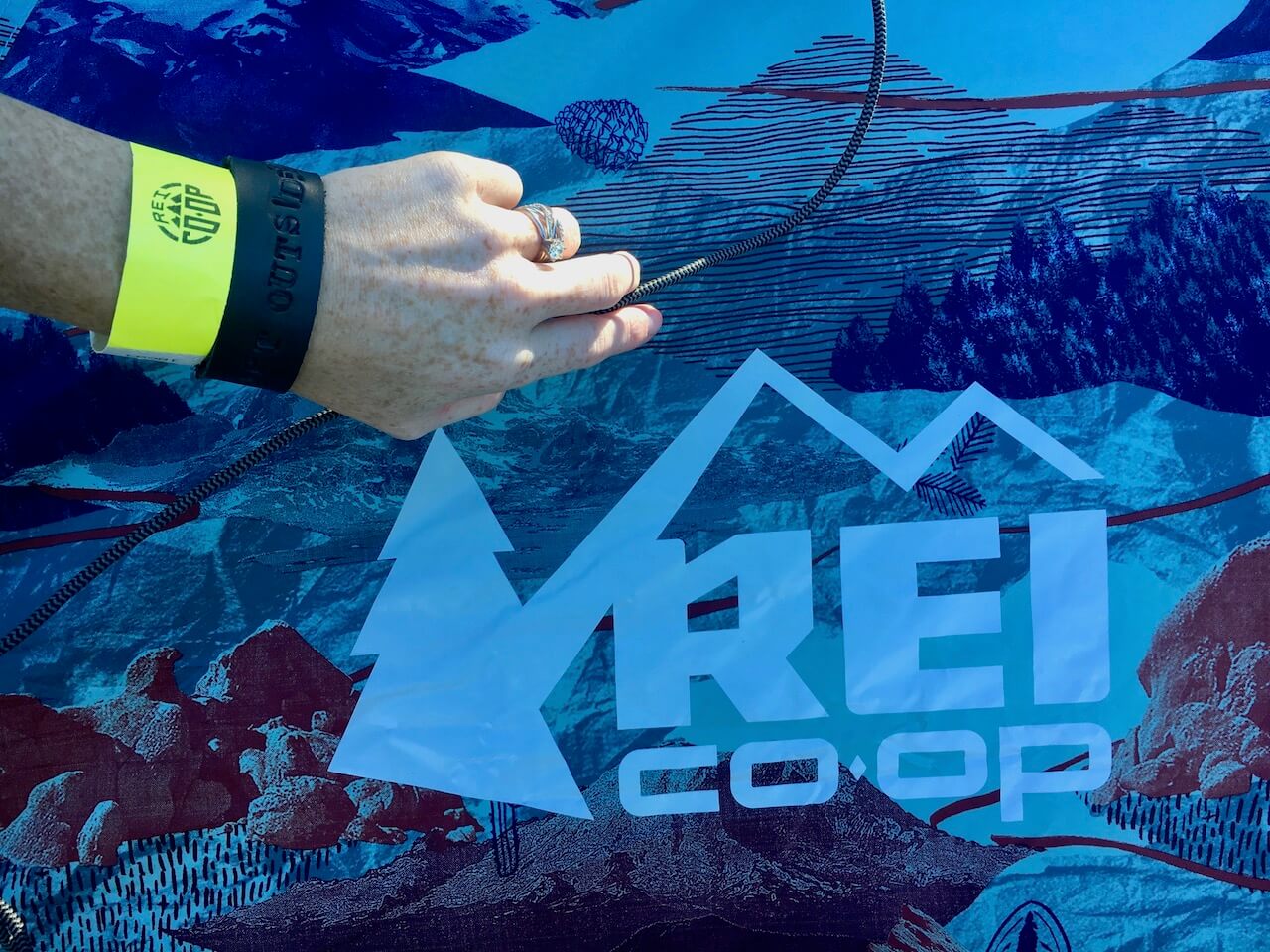 Leatherman was there showing some of their survival products and how to use them, and they also showed us how to make paracord bracelets and keychains. 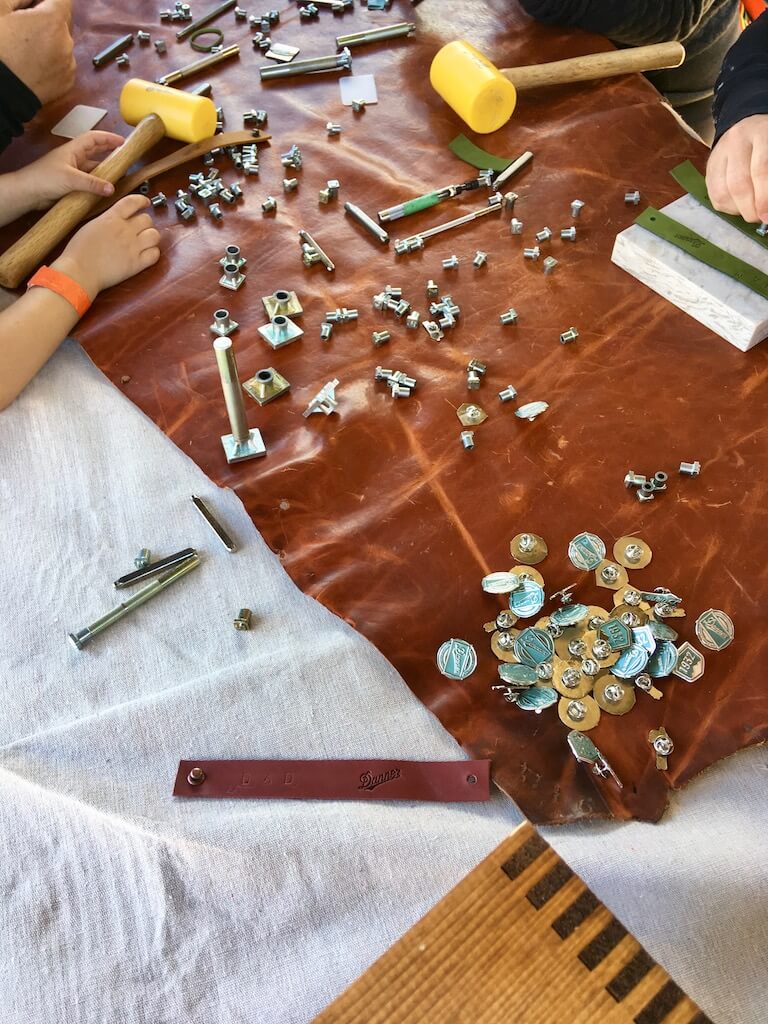 Another booth they had set up was from prAna. They had a Giant Jenga game, where you got to pull one piece, and it showed you what prize you won. I actually pulled 3 pieces that were blank, so they had me pulling more until I won a prize. Finally, I pulled a piece showing I won a hat, and I was able to choose from any of the hats on the table. B pulled a piece as well and won a prAna water bottle. 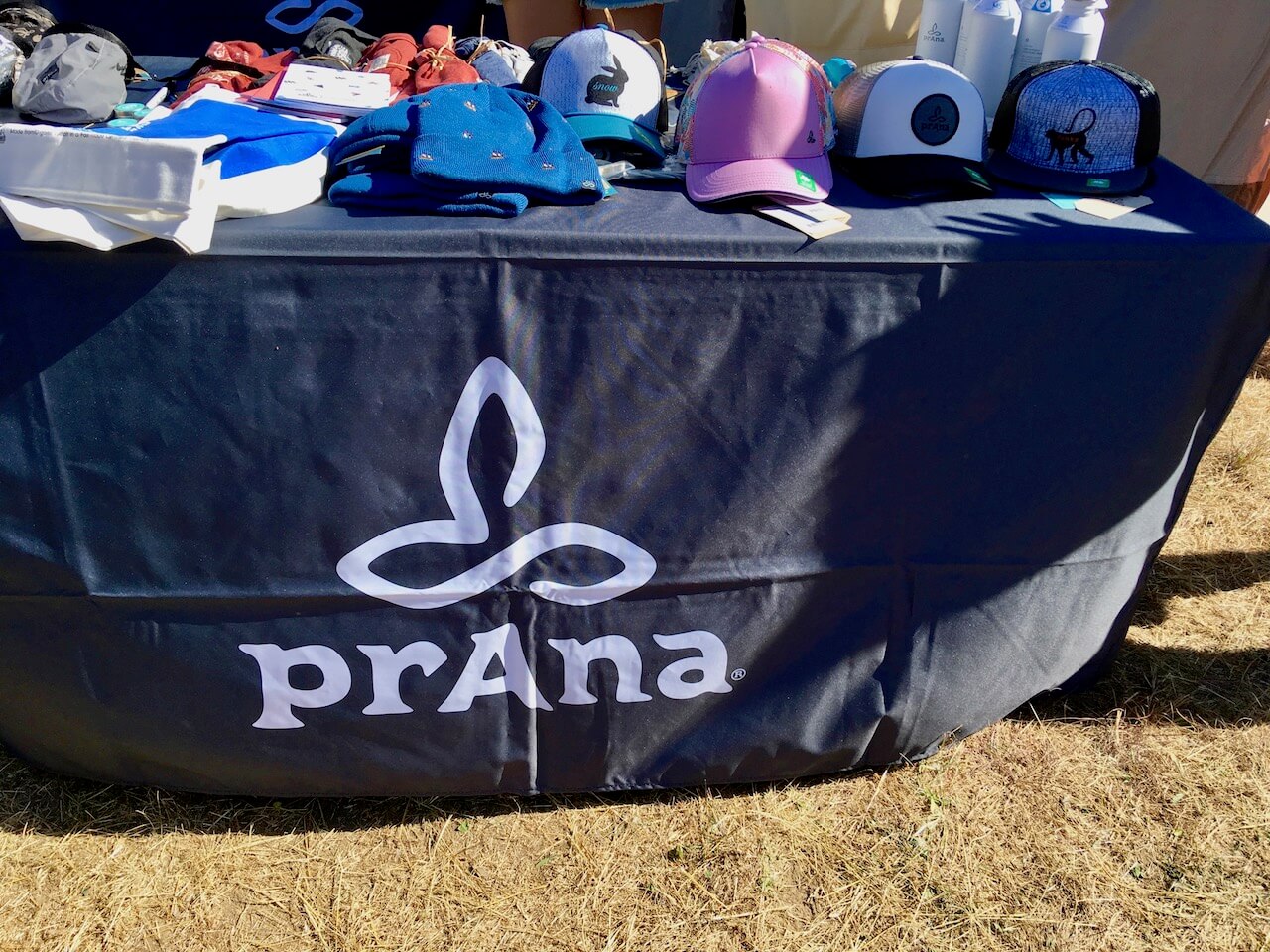 After we checked out all the booths, we found a good spot to set up our tent, and went to work. It was pretty windy out there, so B was smart and had us set the tent up near a wall which helped cut down the wind. Our REI Tent was really easy to set up, so it didn’t take long at all.

While we were setting up our tent and laying out our sleeping mats and sleeping bags, we heard a band starting to play, so we went over to watch a bit. Everyone was sitting around in the camping chairs in front of the stage relaxing, listening to live music, and enjoying the beautiful outdoors.

We haven’t really been camping in a long time, because right now we don’t have all the necessary equipment we need to go. Especially cooking equipment. There is so much you need to bring if you plan on cooking for yourself during the camping trip.

But REI had all our food covered. They served us appetizers a little later while the band finished playing, and we enjoyed “Happy Hour” with complimentary drinks, including beer. We took a little walk around the area while they set up a catered buffet dinner for us with pasta, meatballs, salads and garlic bread. They had a vegetarian option of meatless sauce as well. 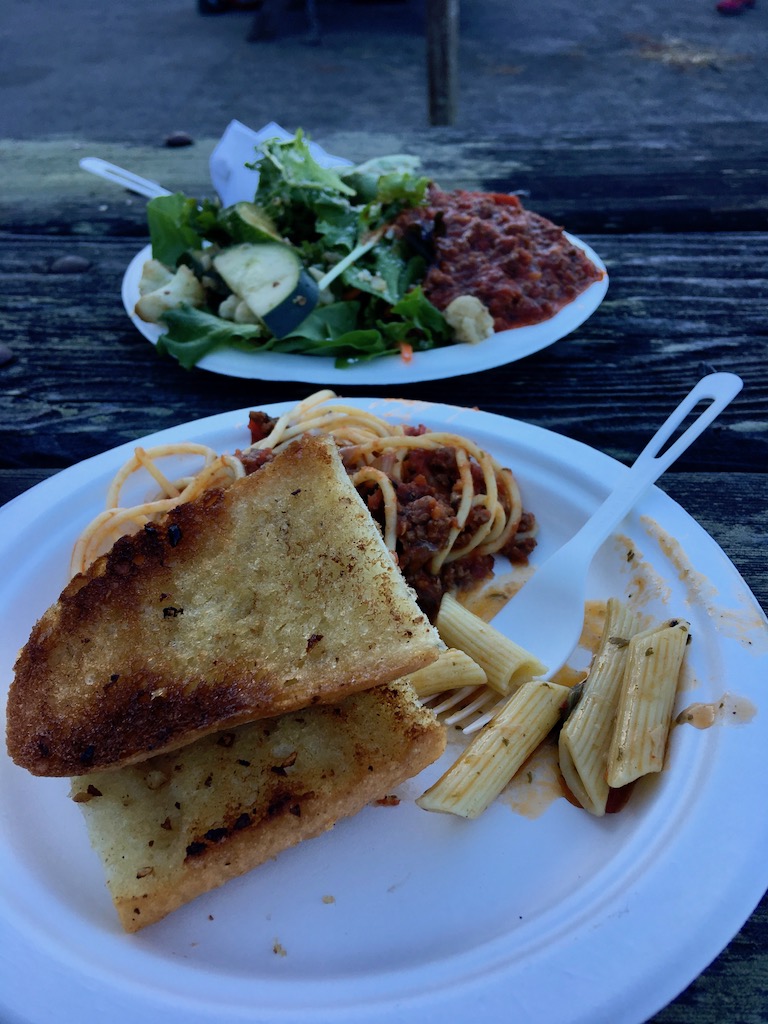 After dinner, we had free time to relax, finish setting up camp, or playing some of the yard games like corn hole and ladder golf. We decided to head down to the beach early while they were setting up the s’mores stations. 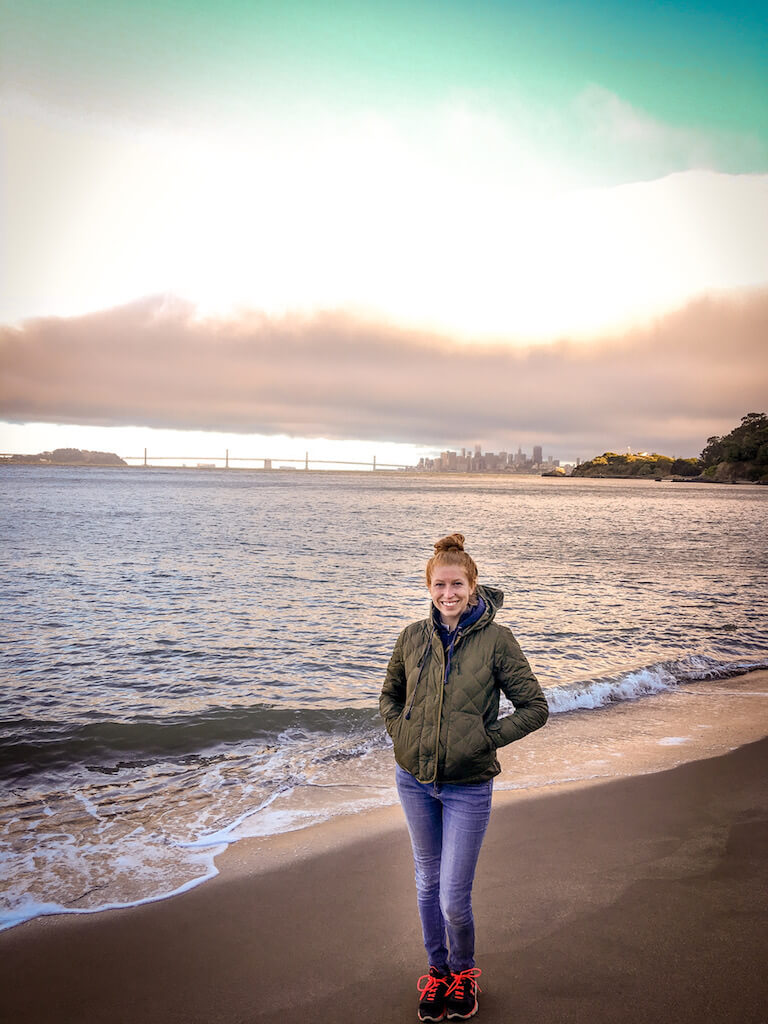 We grabbed a couple chairs provided by REI, and sat on the beach watching a seal swim around and the city lights turn on. The weather was pretty perfect. I had on a light jacket and was comfortable. When we headed back up to the campfire, there were 3 different stations of s’mores creations we could choose from, and plenty of room to fit around and roast our marshmallows. 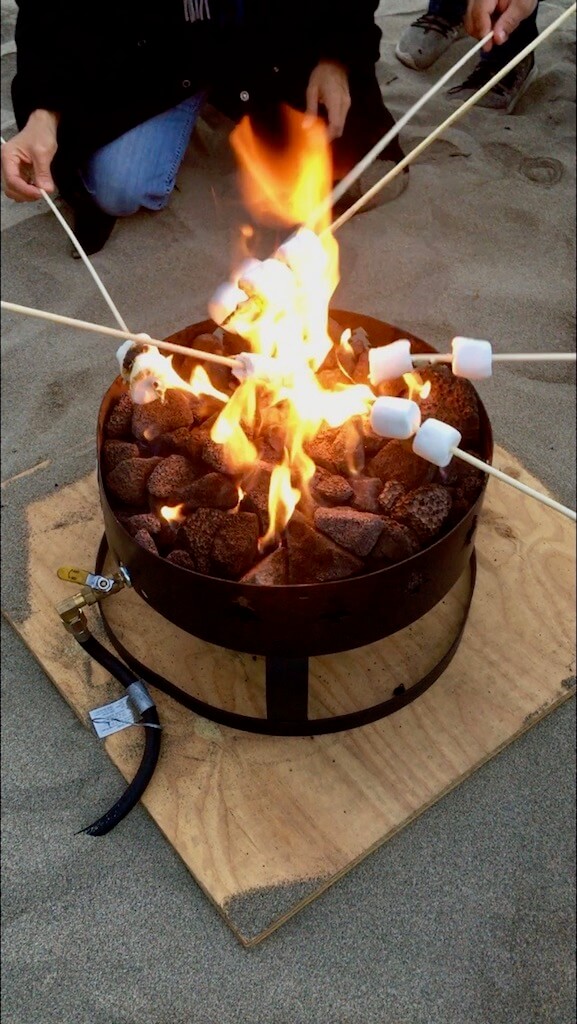 The s’mores were creations I have never even thought to make. One was a table with hot cheetos and bacon pieces! Another was a salted caramel s’more, which was my favorite, and the third was a mint chocolate s’more. 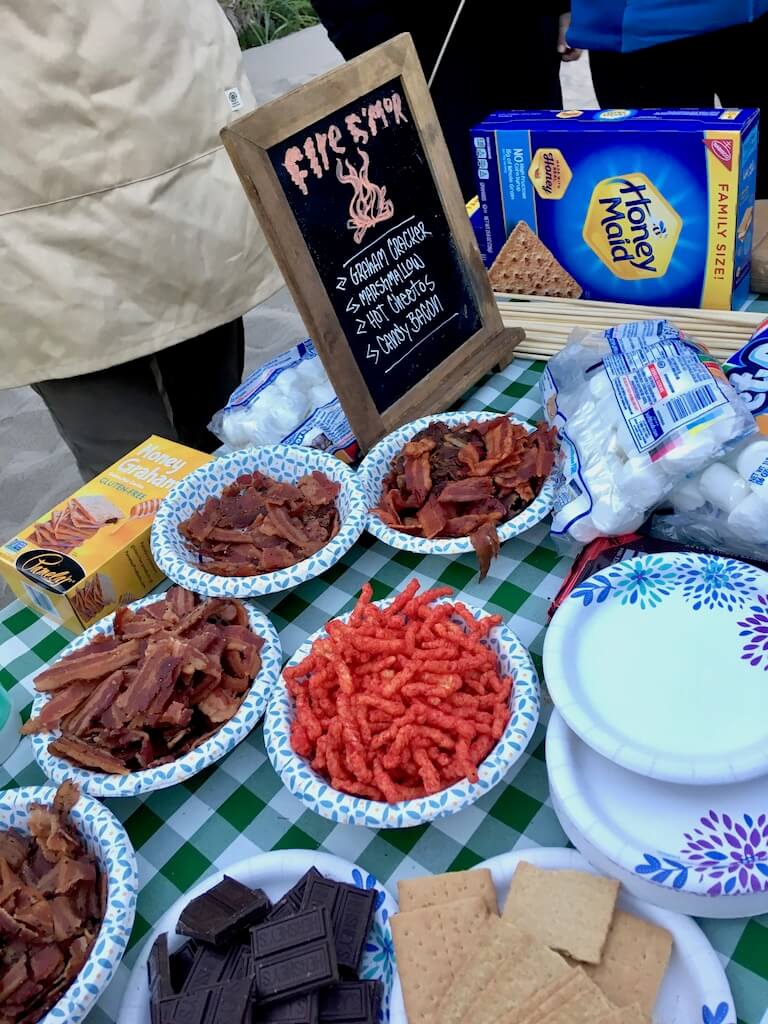 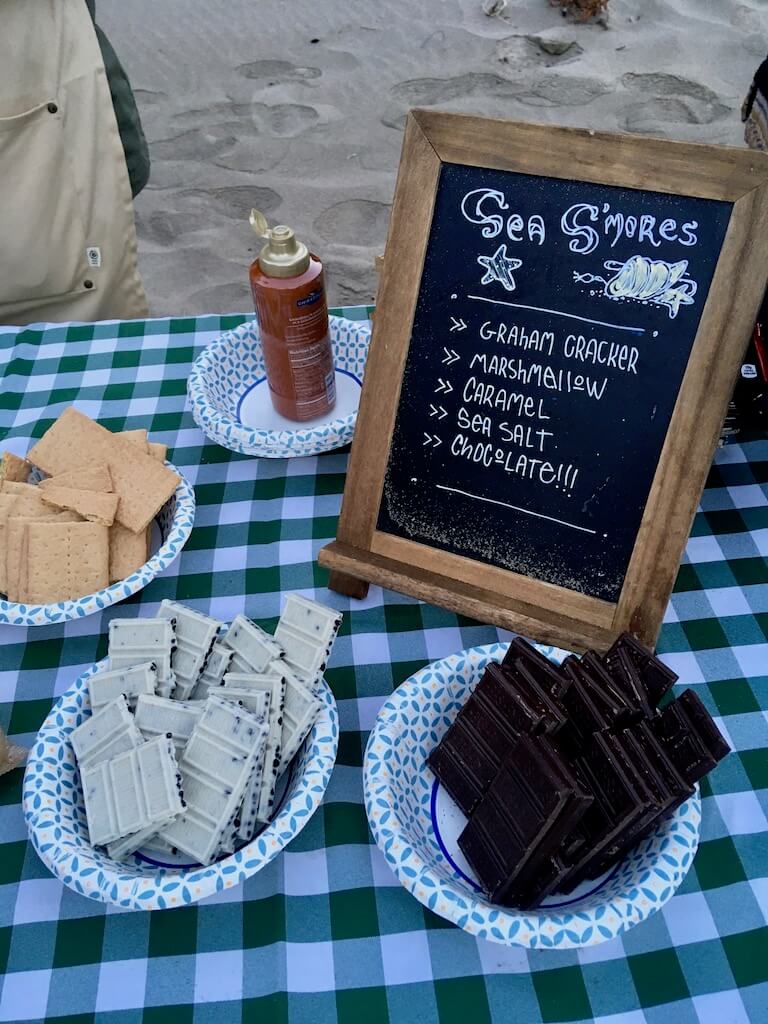 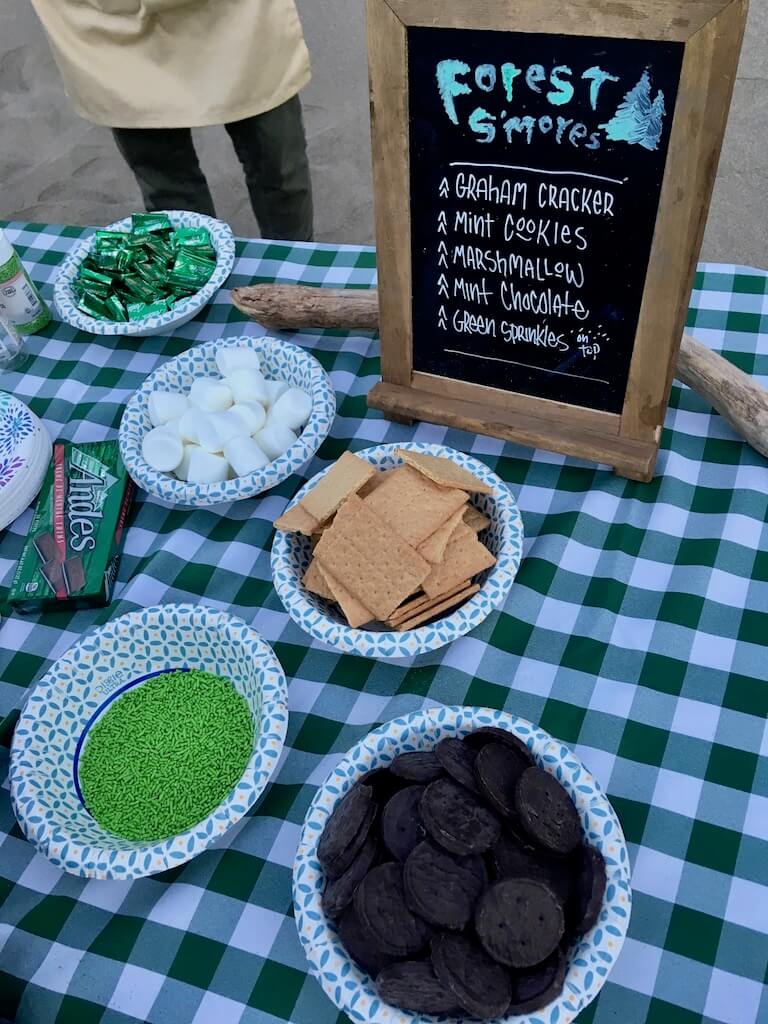 The band came down and hung out on a blanket singing an acoustic set, while an REI staff member passed out light up bracelets. It was a very relaxing night listening to the waves crash on the shore and sitting by the fire enjoying the peaceful night on the island. Plus the view could not be beat!

In the morning,there was a catered pancake breakfast, and coffee mugs for our drinks to go (we got to keep the mugs). We enjoyed breakfast and packed up our camping gear. 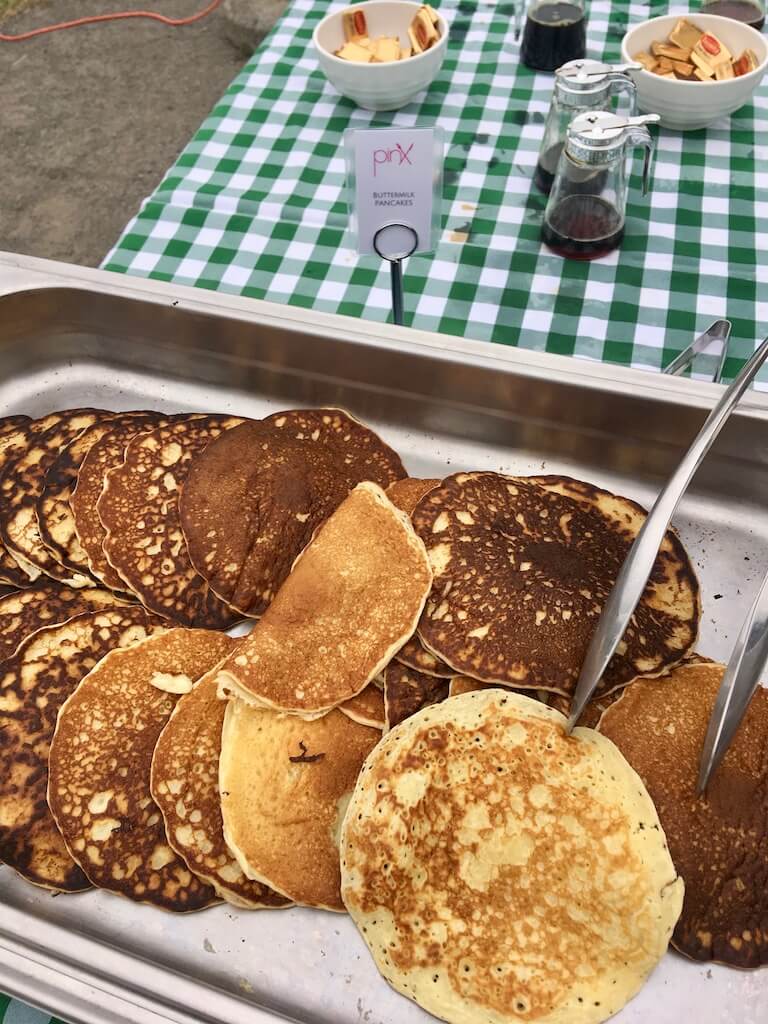 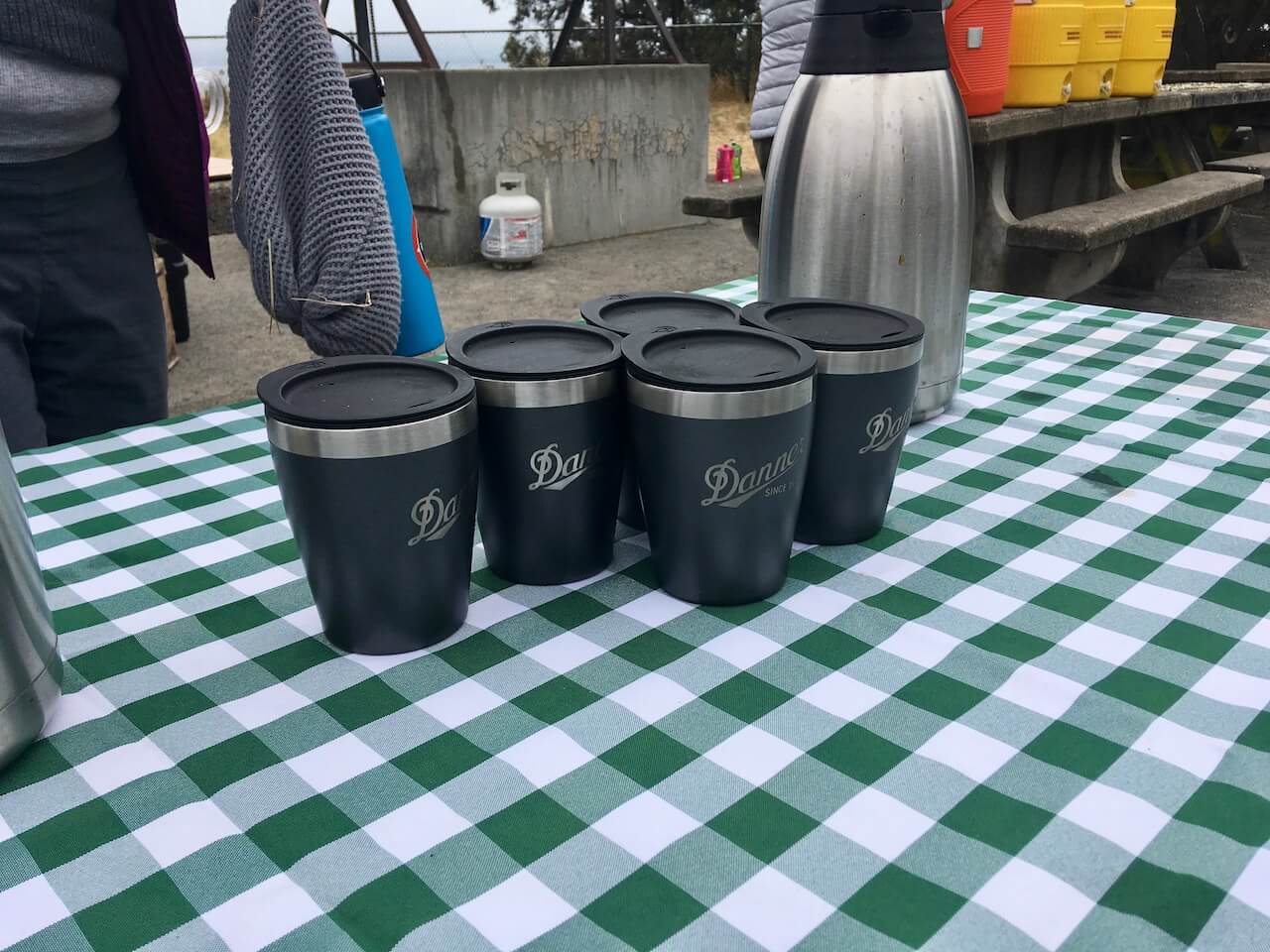 REI again transported all of our luggage and tents, so we could just enjoy the hike back to the ferry. We decided to take the opposite way around the island, so we were able to complete the whole circumference. This way was a little longer around, but we got to see the Golden Gate Bridge the whole way, and ran into some wildlife as well! We saw a baby deer and a mother walking around, a coyote, and another deer laying under a tree.

It’s a hike we would for sure do again! 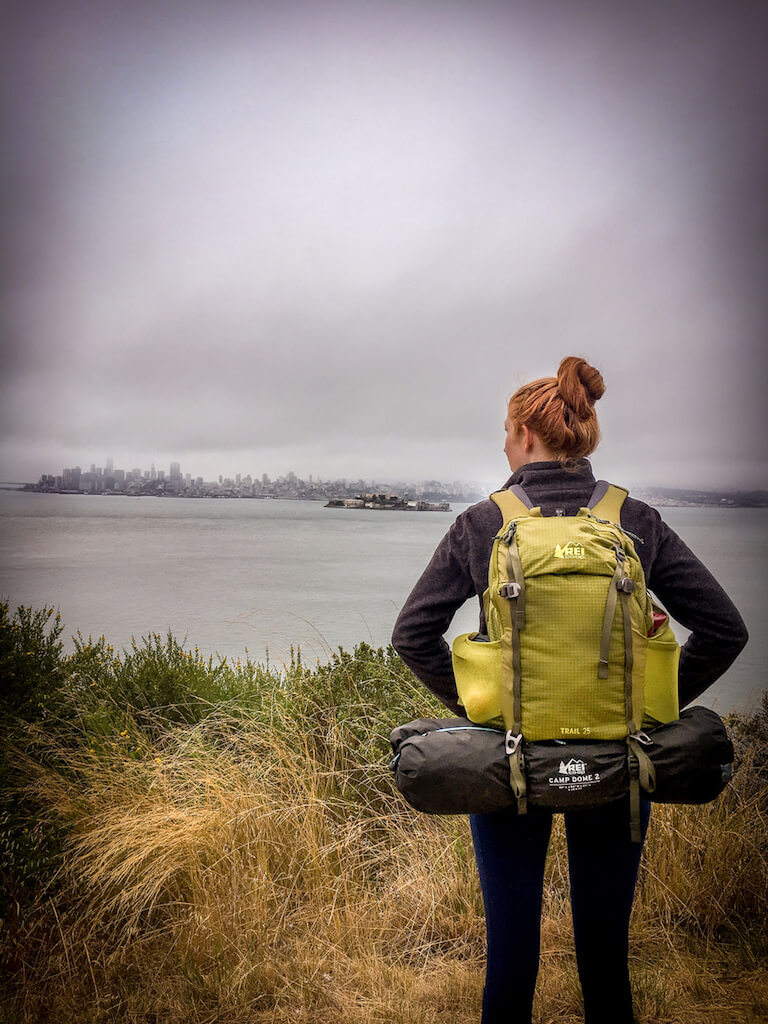 We got to the ferry and took the 5 minute ride back to Tiberon, while talking with other campers about how excited we all were to check out another REI experience soon

Another awesome thing we discovered was that REI rents camping gear! Say what?!

We had no idea. Right now, B and I are in between moves, just married and downsizing, so we have to borrow any camping equipment to go out. Sometimes its more of a hassle than to just skip the camping trips, but now that we discovered how easy it is to rent all your camping gear from REI, we will probably go out more often. For this trip, we rented our tent, sleeping bags, sleeping mats, and even our headlamps and backpacks! Check out their rentals here and see how easy it is for you to get your gear. 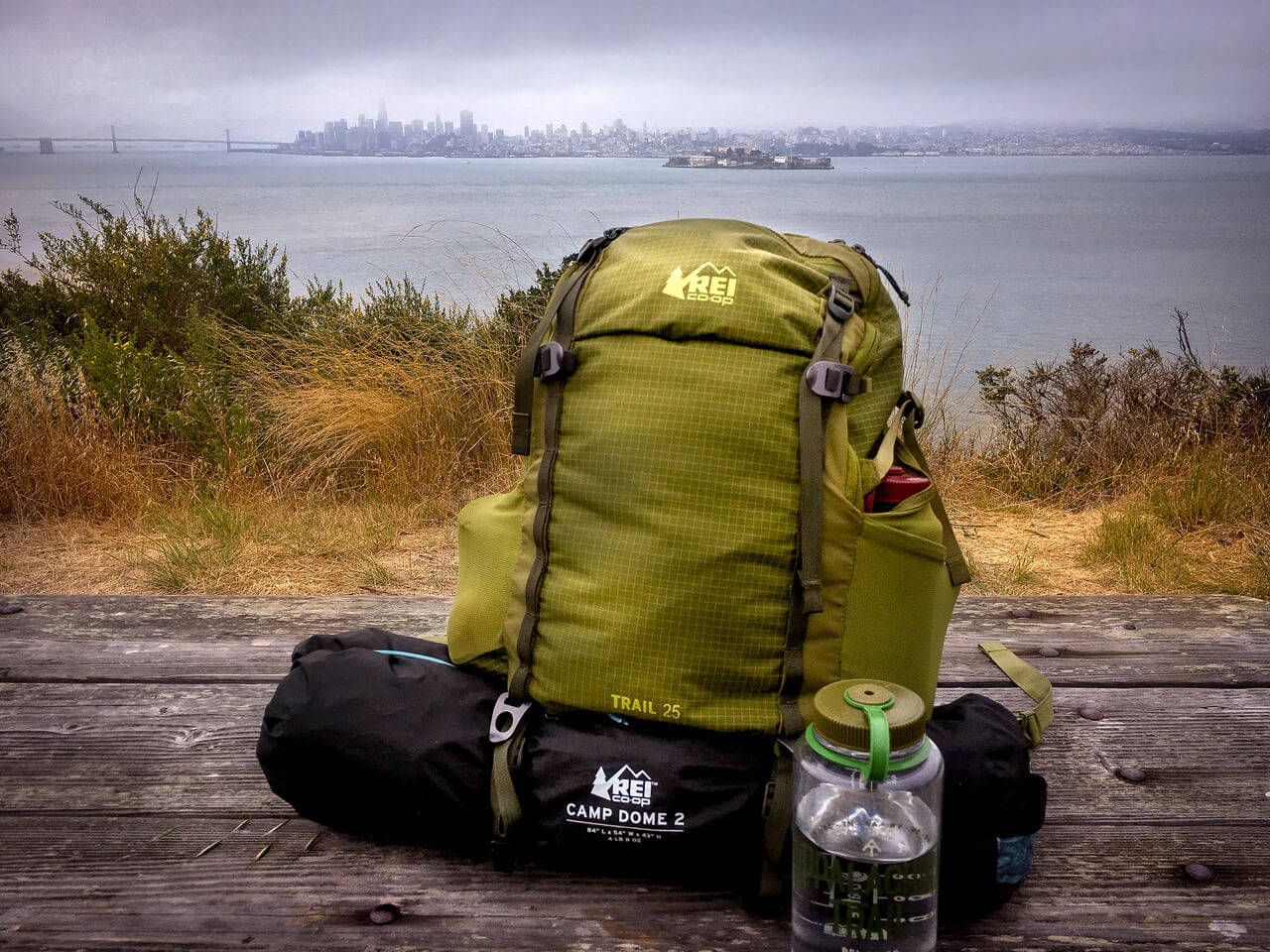 Did you know REI hosts experiences throughout the states? You can participate in a kayaking tour, find a  hike in a nearby city or even join an awesome campout where they take care of everything from food to entertainment like the one we did on Angel Island State Park. 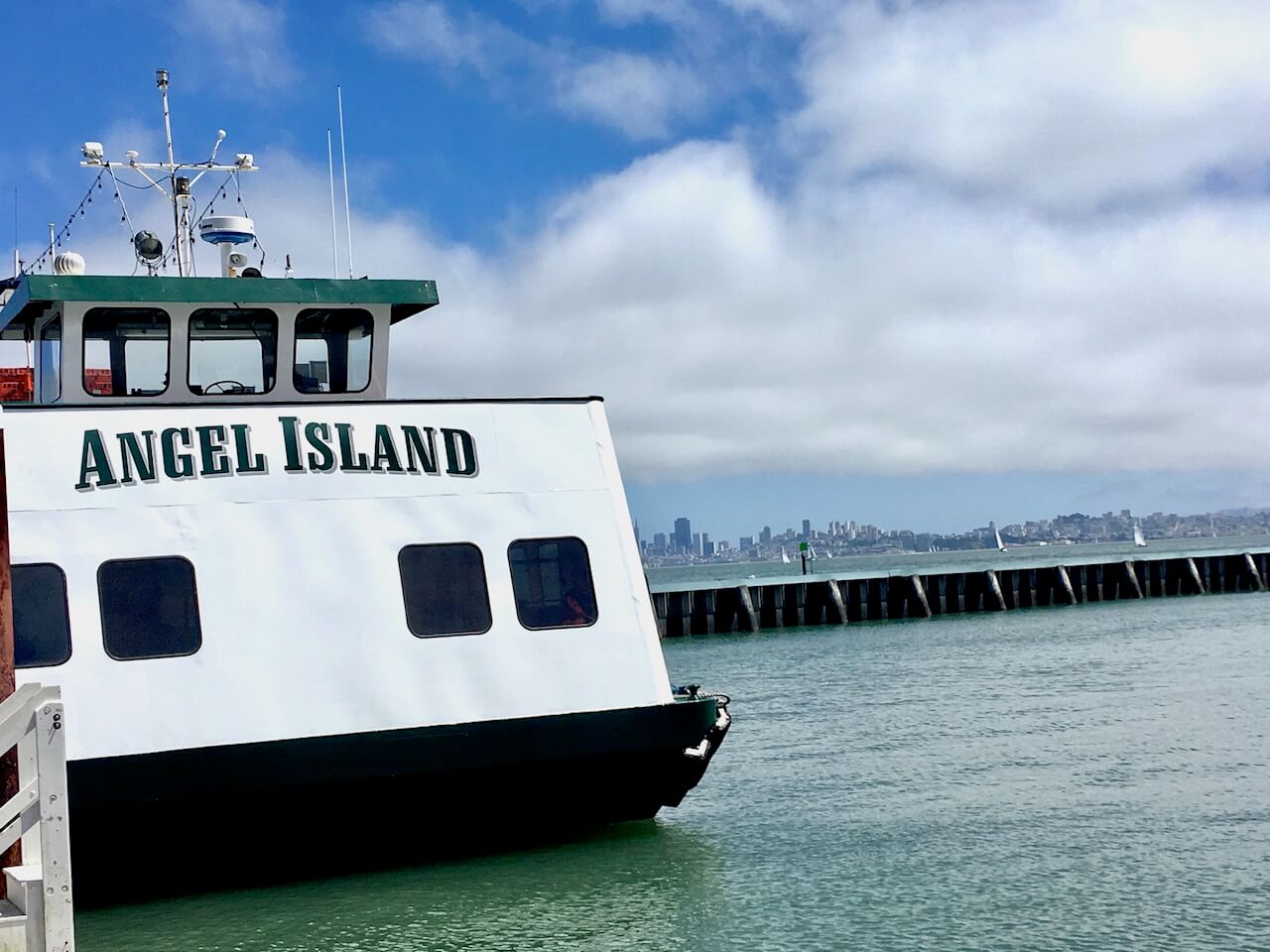 We are so excited to have discovered this awesome REI campout, and now we have no more excuses to not go out and OptOutside! Check out all REI day tours, classes, and events near you.