Banff is such a dream! The first time I saw pictures of the bright blue lakes, the mountains, and the cute little town, Banff went on my bucket list right then and there.  And high up on the Bucket List too. We had planned an epic West Coast road trip from the border of Mexico to the border of Canada, and figured this was the best time to head to Banff. 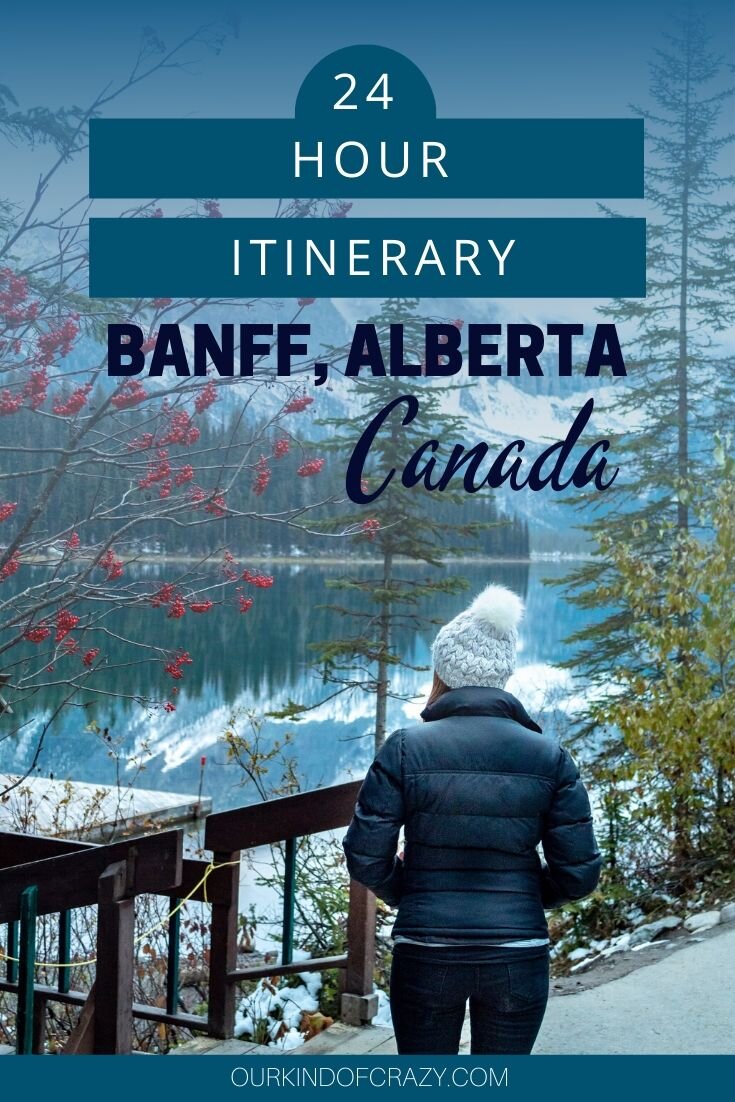 We were in Banff the first week of October, and it was just a few days too late to go visit Lake Moraine. So, be sure to go a little earlier in the season before they close it. 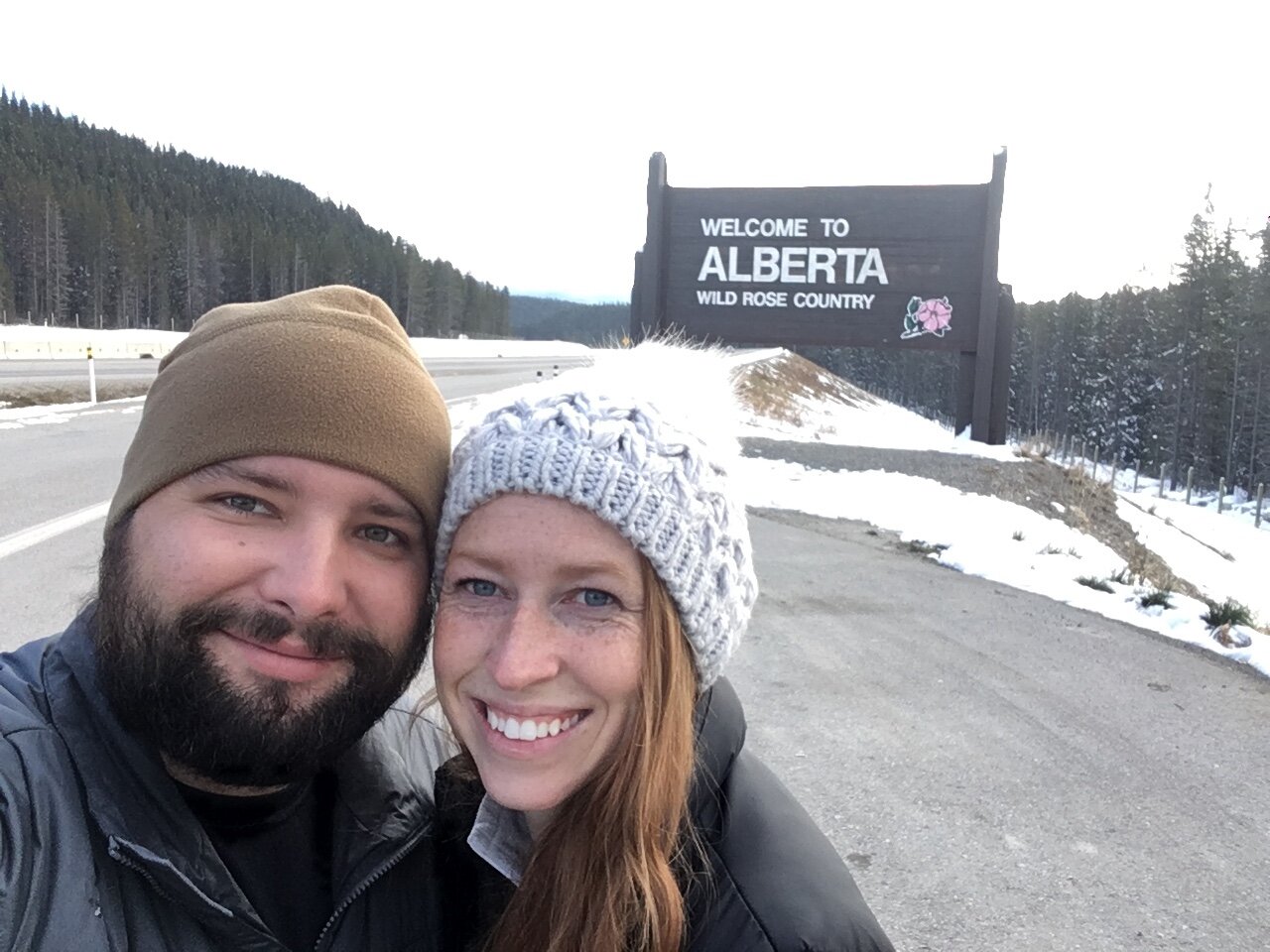 We actually stayed about an hour outside of Banff, because we were booking the night of, and prices to stay in Banff seemed very high to us in comparison to other cities around the area. We get it…tourism…but we just decided to save money and take the hour drive in, in the morning. 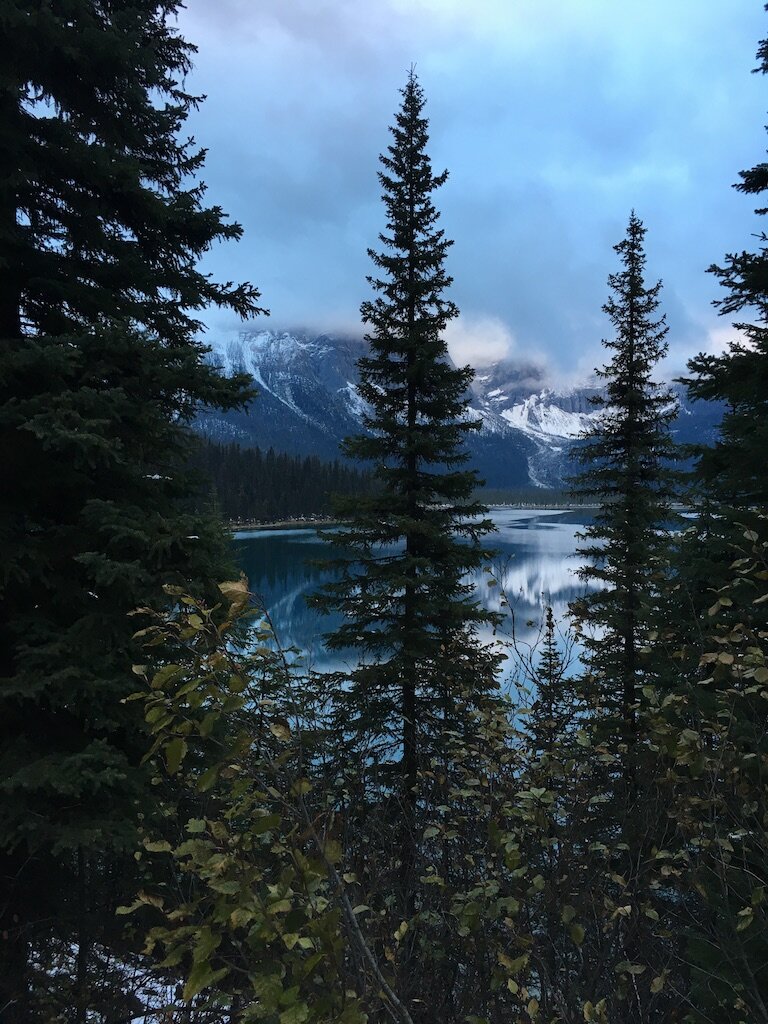 Emerald Lake was one of my favorite lakes in Banff, and it may be because we had the best experience there. We were the only ones there, which made it even better. We got there as the sun was rising, but it wasn’t quite over the mountain peak. The lake was crystal clear, but didn’t seem too green, so we weren’t quite seeing why they call it “Emerald Lake”. But as soon as the sun hit the peak of the mountain, the waters seemed to instantly turn a beautiful green color, which made it live up to its name. We hiked around the lake a bit to get some photos. There are some really cool hotels right on the lake as well, which would be a really cool place to stay. And it seemed very peaceful and not super crowded too. 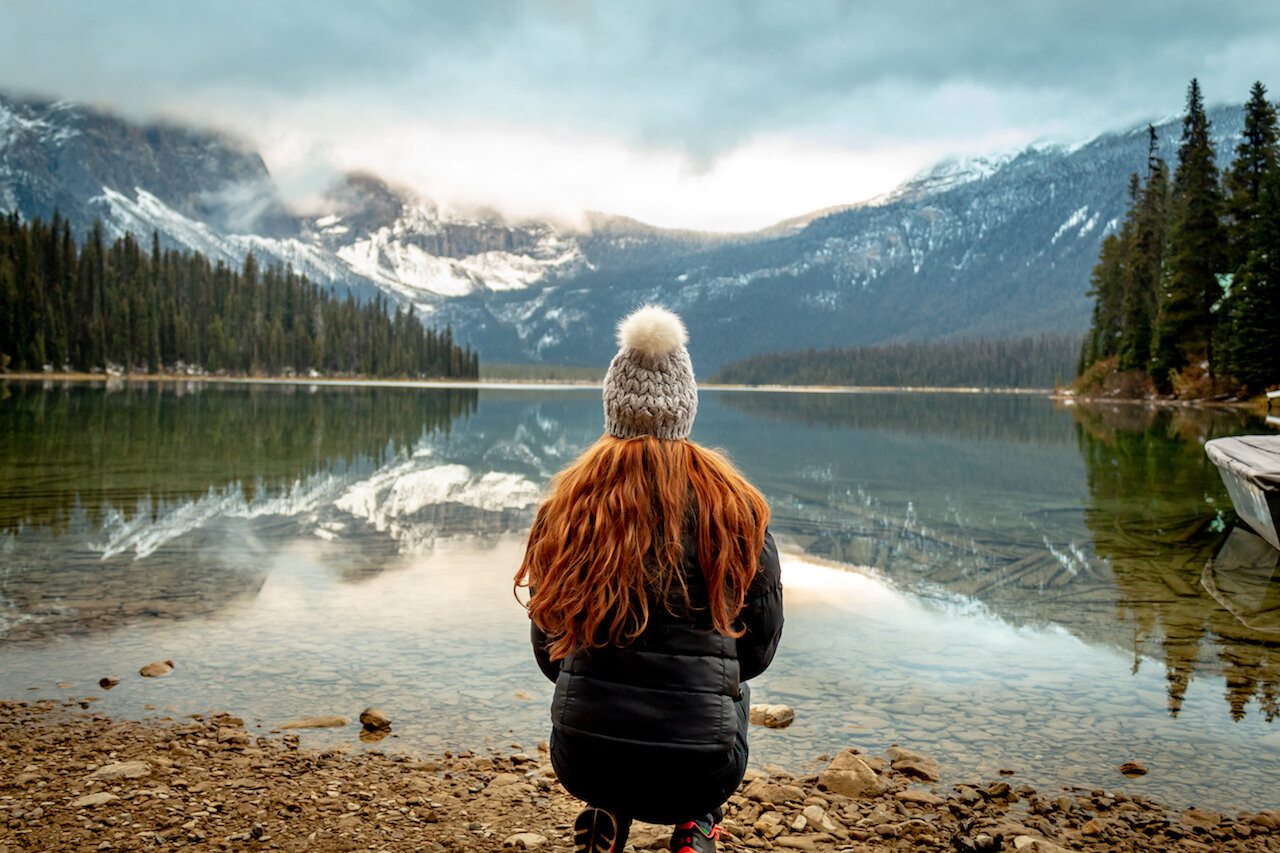 Tip – hit Emerald Lake early in the morning before everyone gets there. It’s worth it! 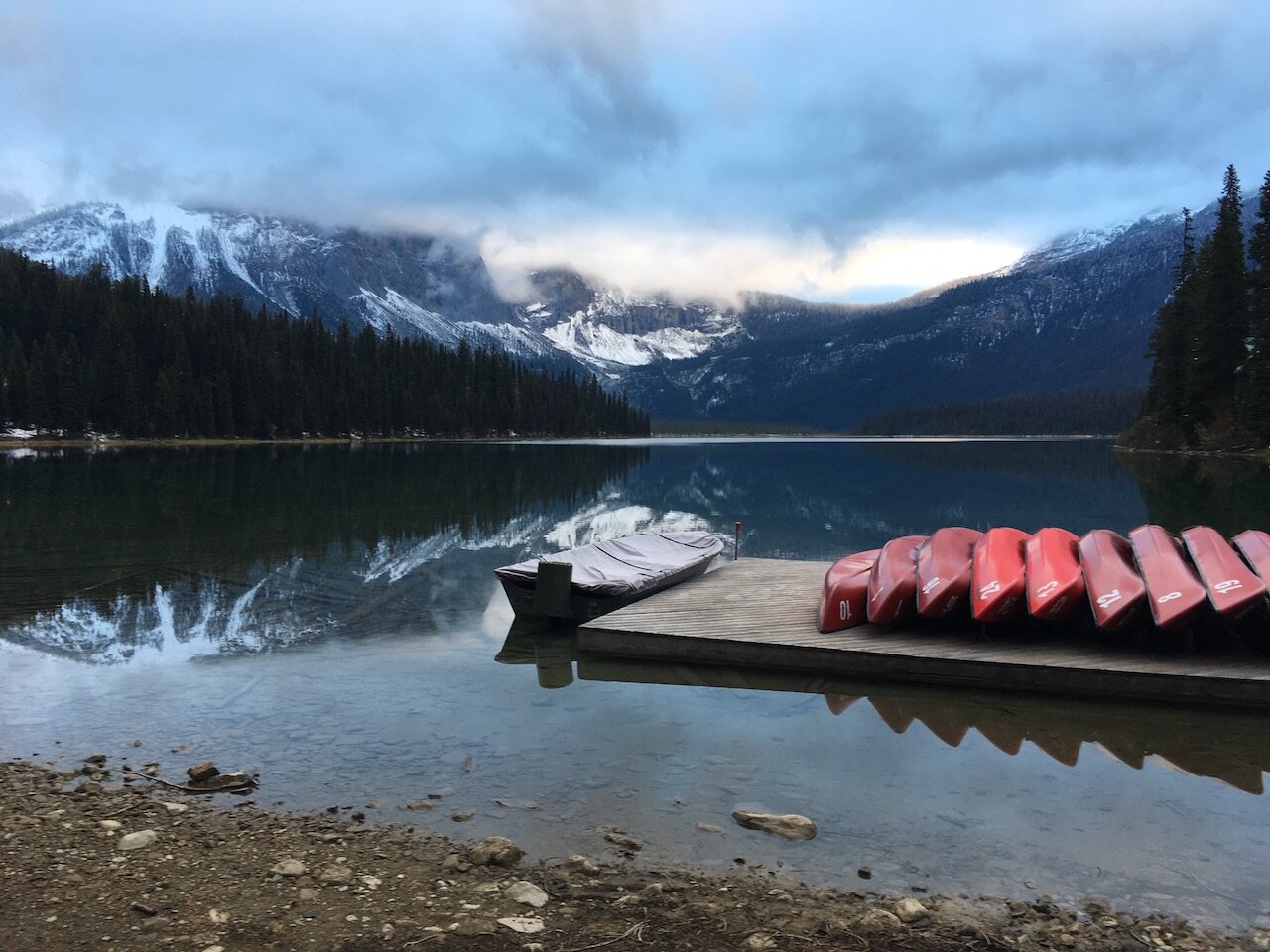 Oh the famous Lake Louise. If you hear the word “Banff” you’re probably already picturing Lake Louise. This lake and Lake Moraine seem to be what made Banff famous, and for good reason. 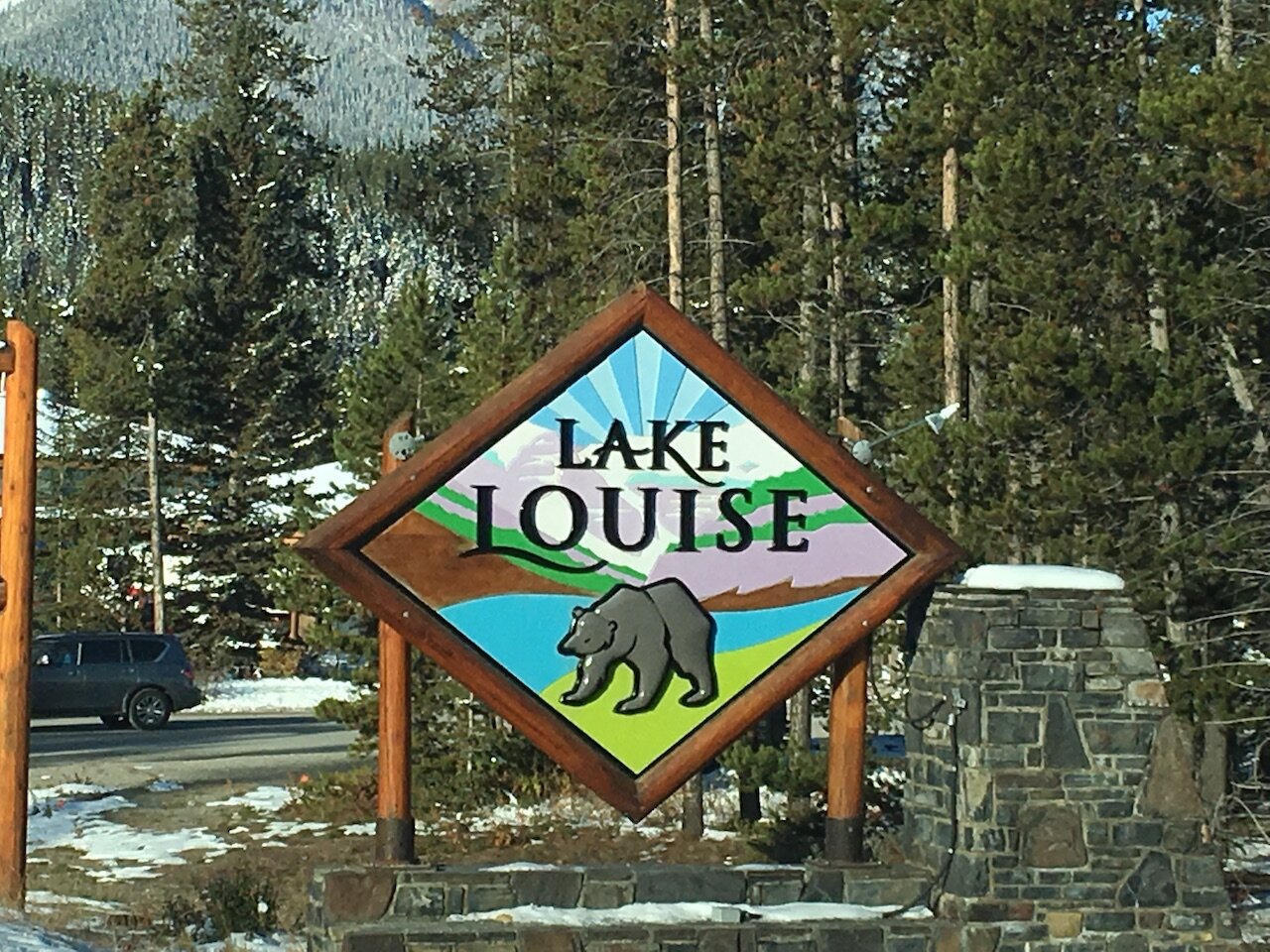 Louise was filled with people already, by the time we got there, and they even had parking attendants to show you where to go. We got there before the lot was full, but just barely. They do have overflow parking if it’s full when you get there. 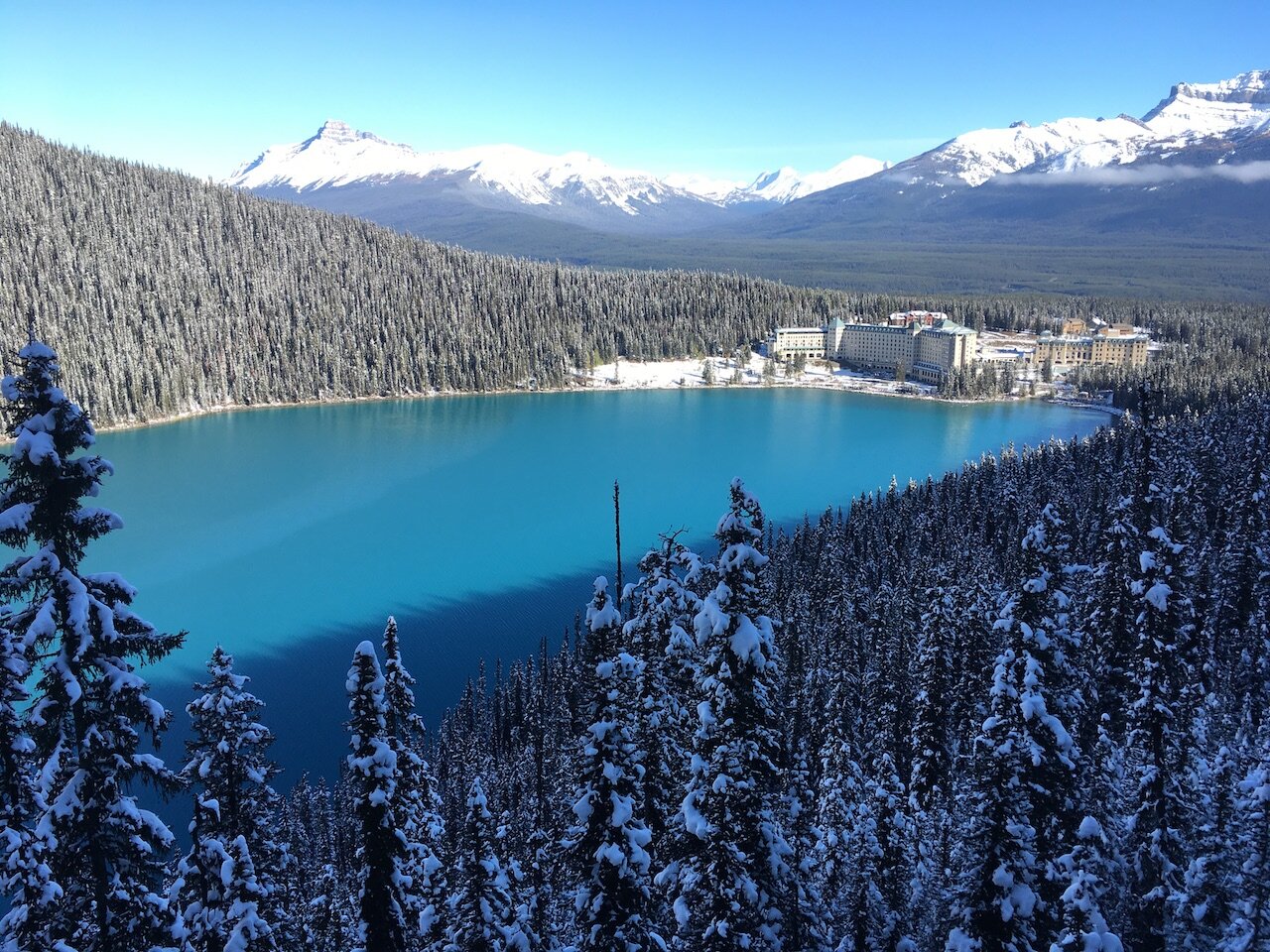 You’ve gotta take the hike up!! Yes Lake Louise was beautiful from the ground, but we didn’t see that amazing bright blue color until we got to the lookout point at the top. It’s a little bit of a hike up (especially if there’s snow on the ground), but it is worth it. Just take your time going up, and enjoy the views. The lookout point isn’t huge, so you might have to take turns with people to get your pictures, but the view is incredible, and you’ll see why everyone comes out! 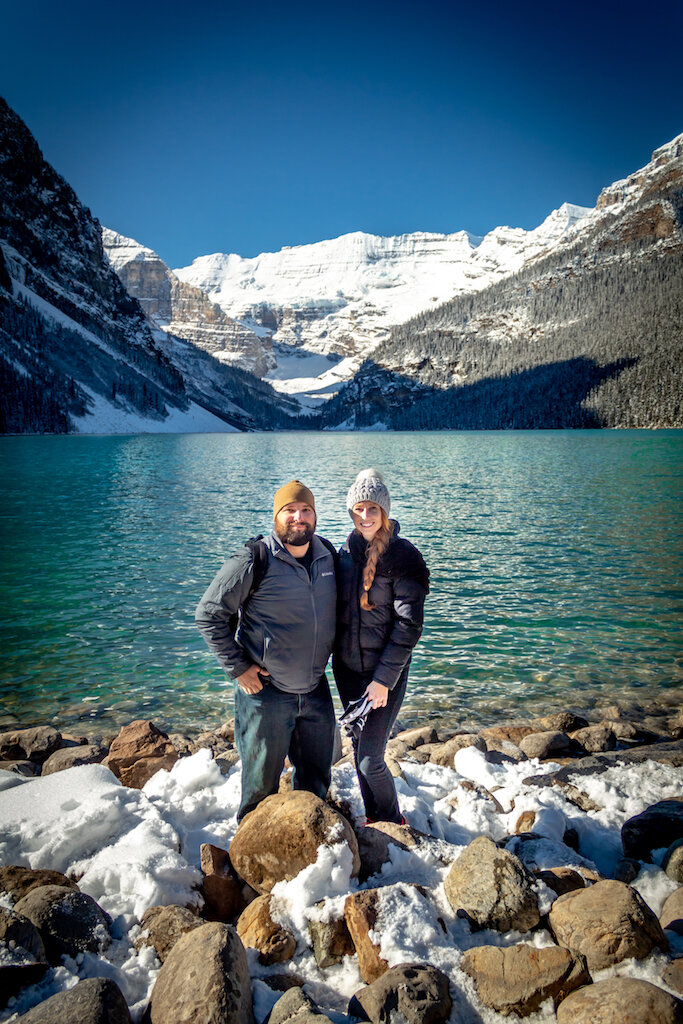 We spent more time down at the bottom after we hiked back, and got lots of fun pictures. But it was pretty crowded the later it got. Have lunch at the restaurant inside for a beautiful view. 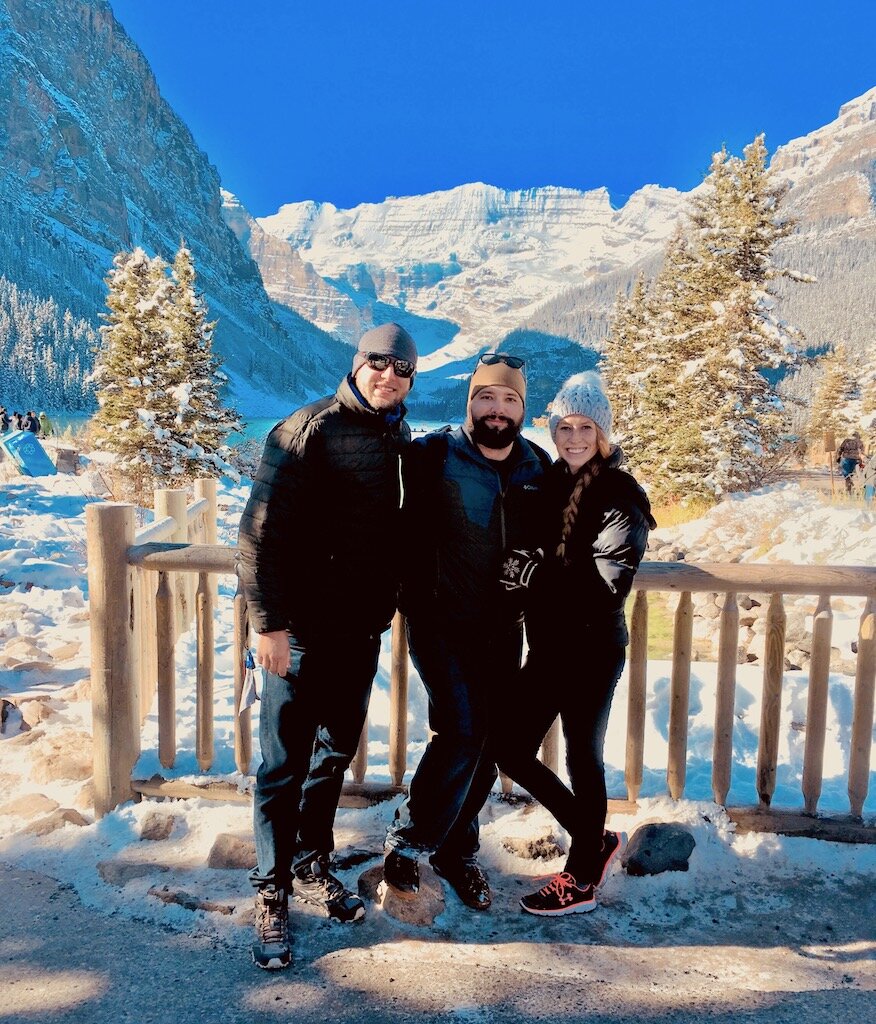 You can also rent kayaks to go out on the lake. They were a bit expensive for what it was, and there were sooo many kayaks going out when we were there. It’s definitely an Instagrammable attraction!

Tip-if you want to see Lake Louise without a bunch of kayaks on the water, check the schedule online. The kayaks were allowed on at 11am when we went. So we had a chance to enjoy the lake itself and then watched tons of kayaks float into the lake after 11am. 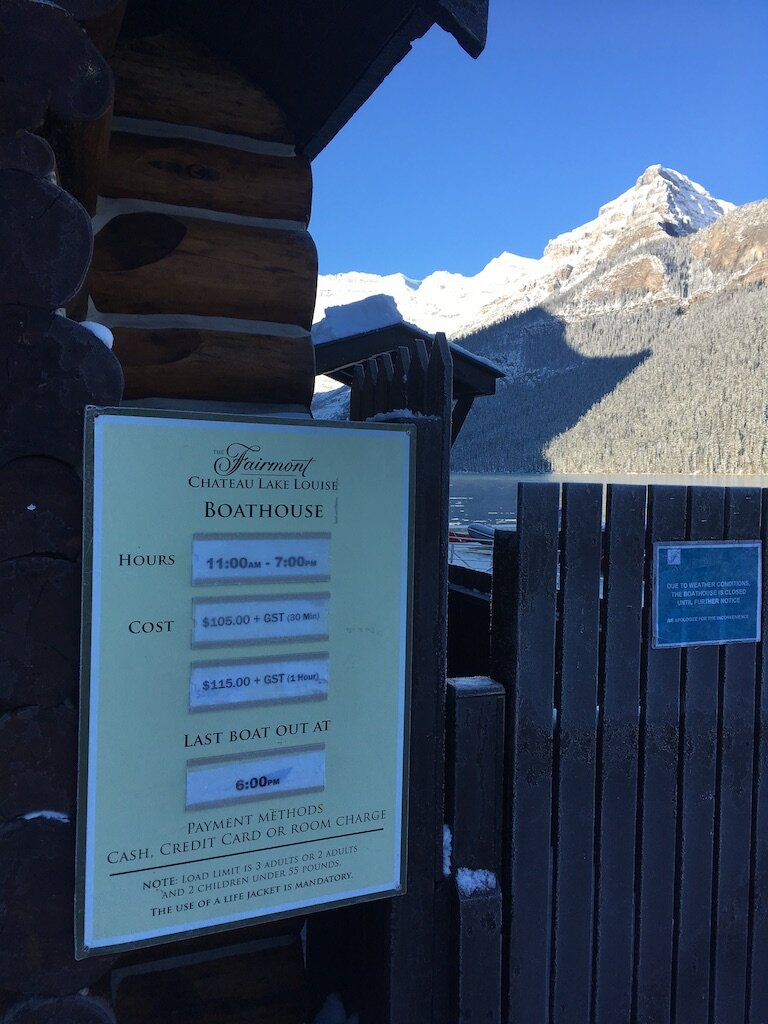 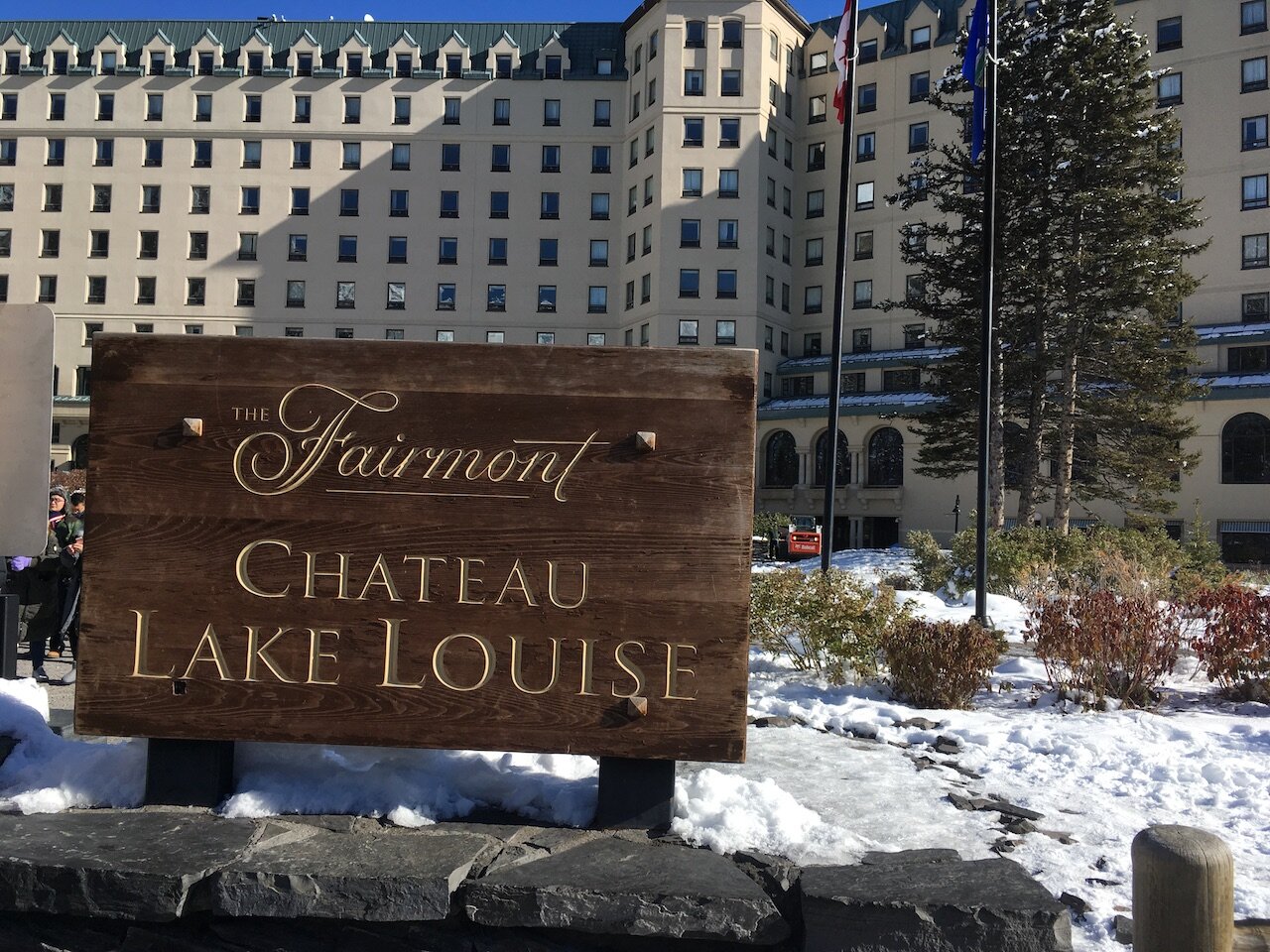 Unfortunately for us, Lake Moraine was closed just days before we got there because of the ice and snow up the road. They close the road as soon as conditions get questionable, so if you’re dying to see Lake Moraine, be sure to go before the snow starts.

Tip-if you are brave enough and can’t miss this lake when the roads are closed, you can actually hike to it. However, the hike is around 7 miles one way, so be prepared if you’re going on that adventure.

We were pretty bummed about missing Lake Moraine, but we found an awesome lake that totally made up for it!

Peyto Lake was one of my favorite stops on our trip. After Lake Moraine was a bust, we decided to check out some lesser known lakes and I am so glad we did. We were actually told that the road to Peyto Lake was closed and we wouldn’t be able to see it. We decided to try anyway and found that just the road leading to the lake was closed. There were tons of cars who had the same idea as us, and everyone just had to find a spot on the side of the street to park since the parking lot was full. 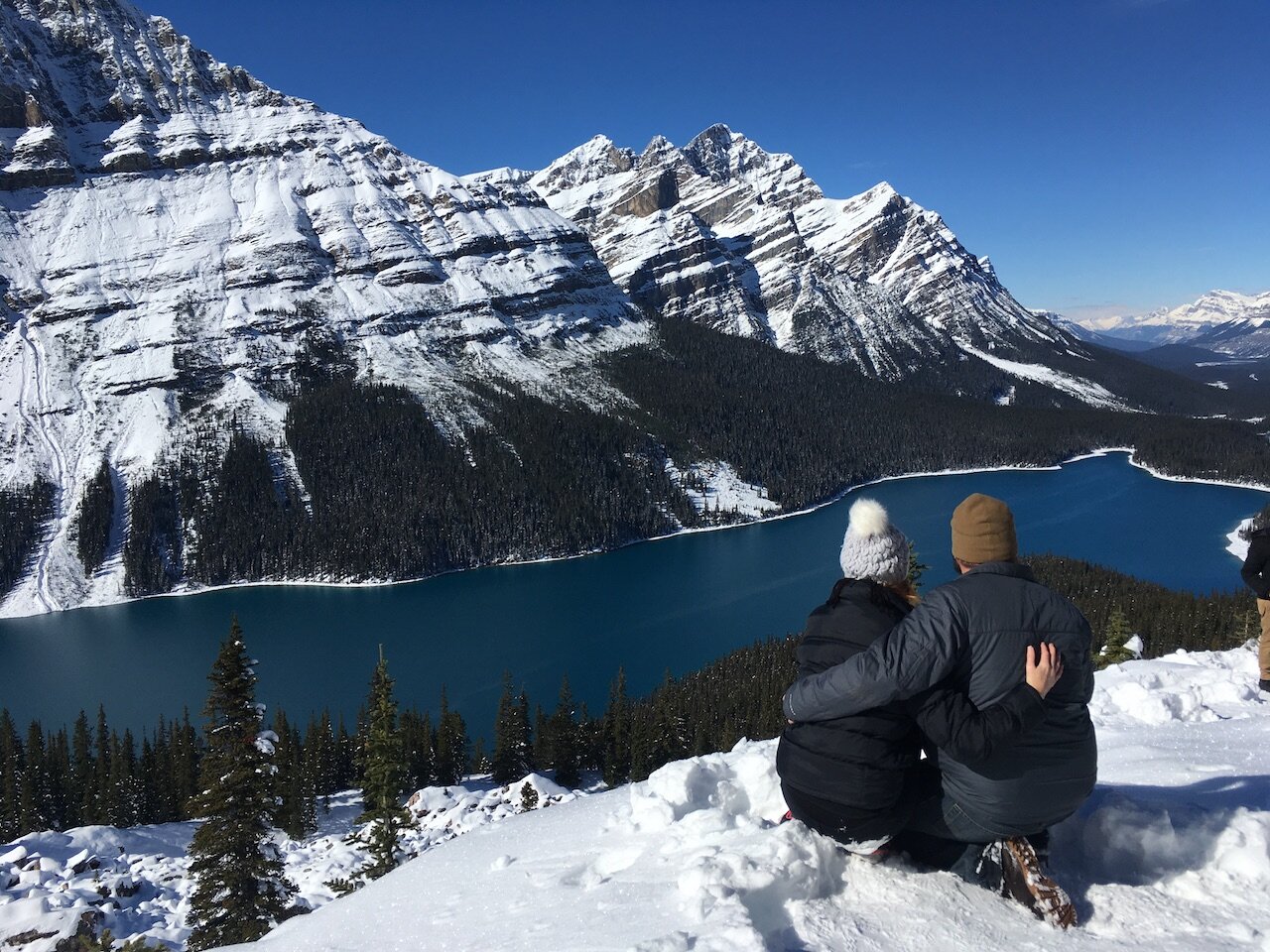 We hiked up the street (which is for buses and cars with a handicap sign) and made it to the top, overlooking this beautiful blue lake. There were several people there, but definitely not as crowded as Louise. We enjoyed some time looking out over the lake and taking in the fresh air. It was even prettier with the snow.

Tip-take a picnic lunch and enjoy it overlooking Peyto! 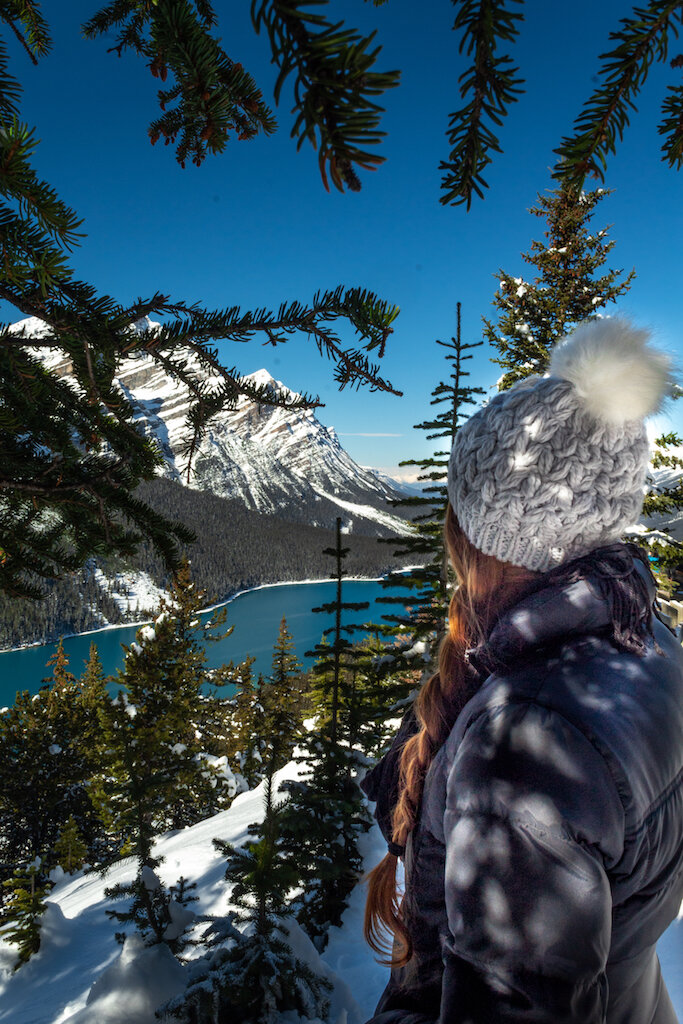 This lake was on the way to Peyto from Louise, and was a good spot to pull over and snap some pictures. You can hike down to it, but it’s pretty rocky. It was worth a quick stop. 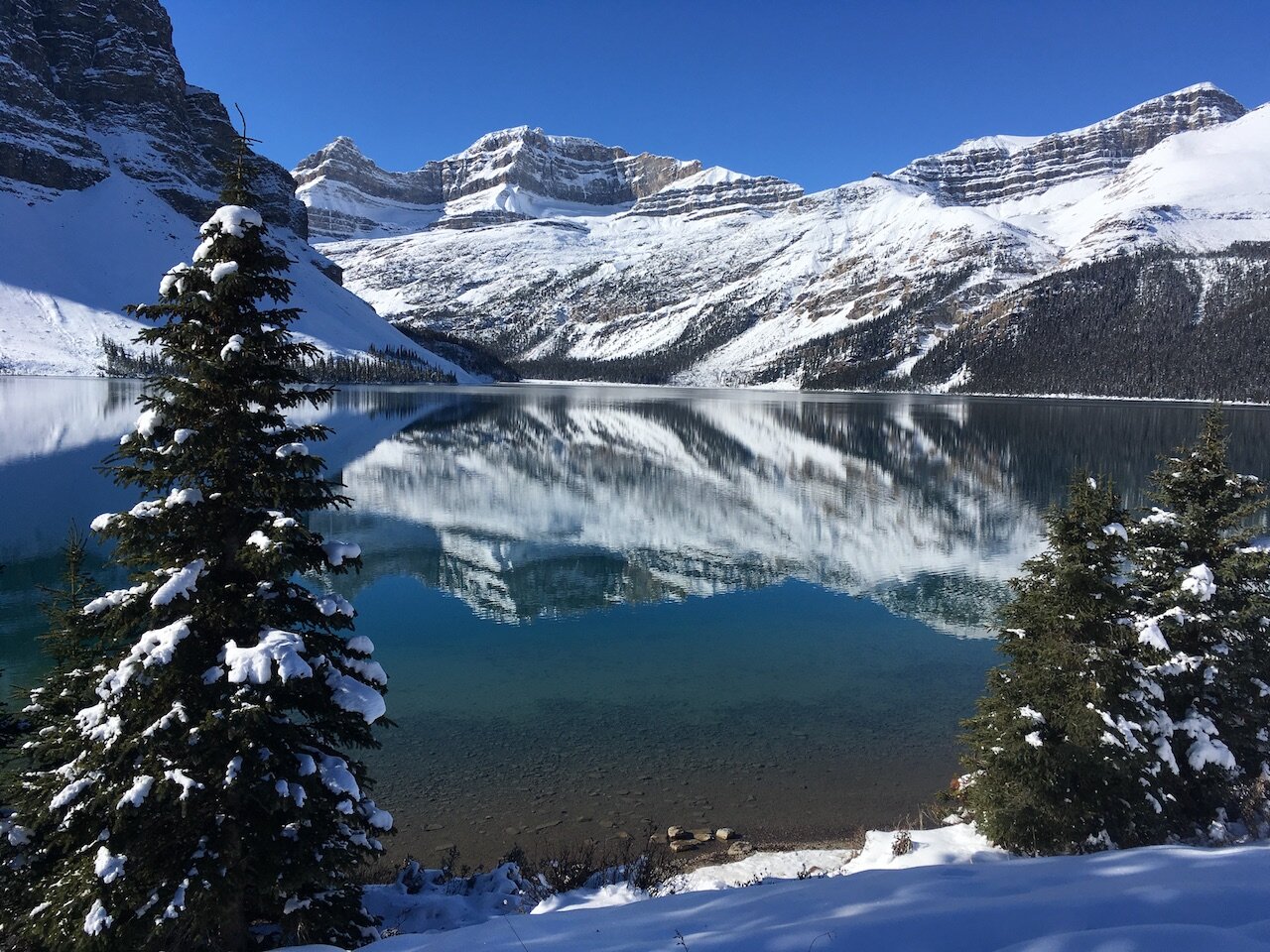 Our hike of a lifetime. Ok, so this hike is not suppose to be anything crazy…just a 1.1km one-way hike to the Lower Falls and a 2.6km to the Upper Falls. We were excited to get going, but soon realized how difficult this hike was going to be. Remember we went in October when there was tons of snow? The entire hike was basically iced over, and there was a lot of slipping and sliding, and some people falling pretty hard in between. There were still so many people on this hike, but we advised lots of older people and children to turn back. It was a fun experience, but definitely not recommended when it is very icy. Other than that, it was awesome to get right up to the waterfall, and we enjoyed the scenery all the way there.

We recommend doing this hike when there is no ice on the ground. It should be about a 2 hour hike, and stopping time of course. 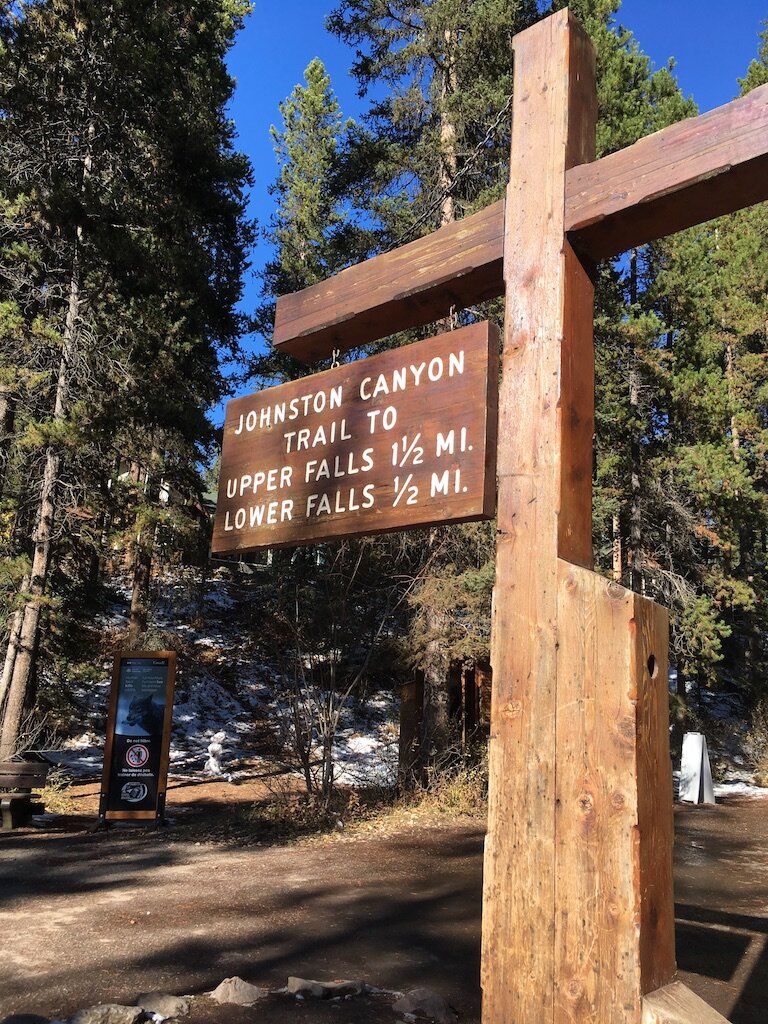 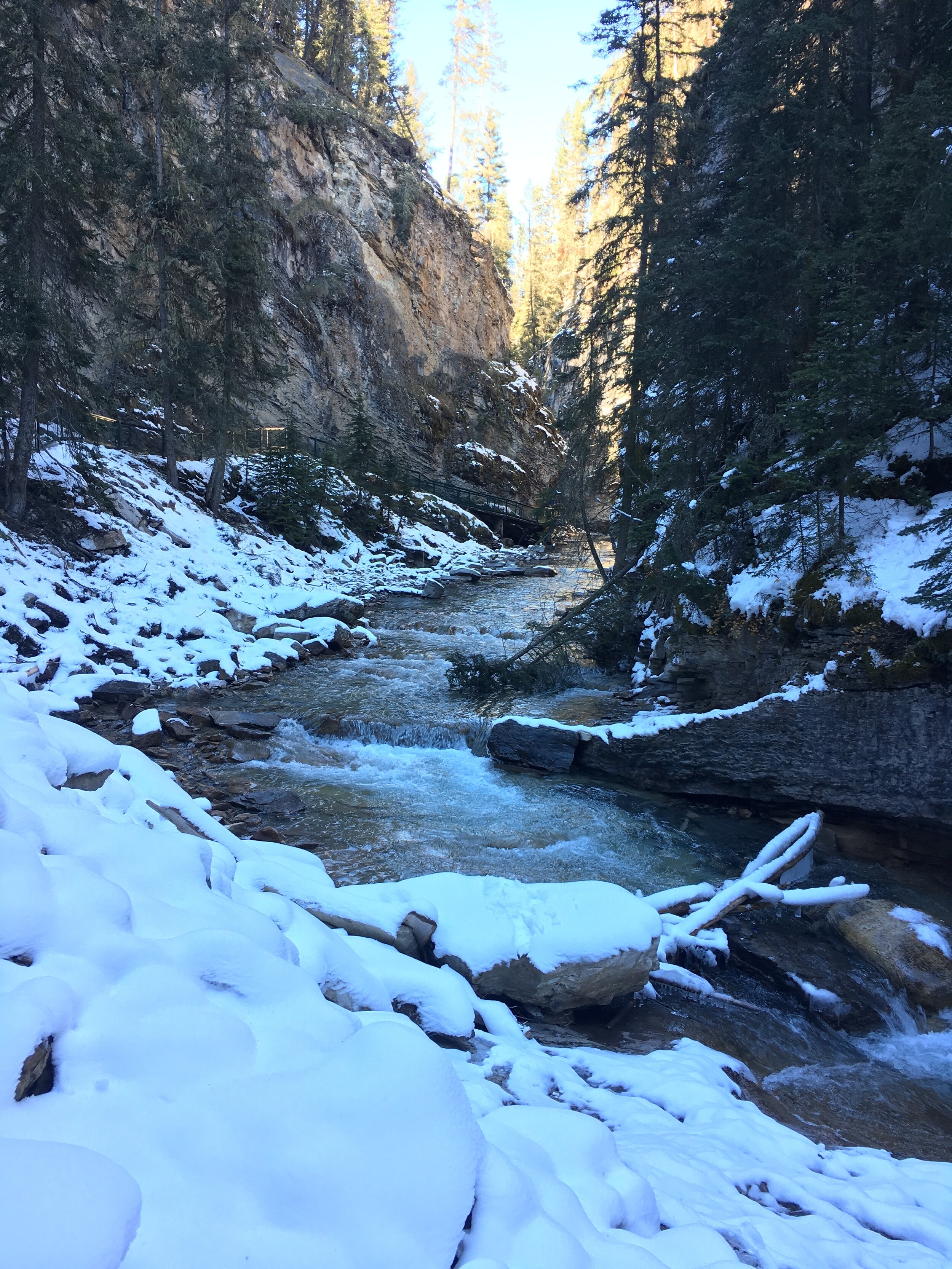 One of the main spots we wanted to go after all the lakes was Johnston Canyon.  There’s a really great spot to get an awesome picture of a huge boulder and a waterfall, called the “Hidden Cave” which looks amazing. Unfortunately, we were there during a birds mating season, and it was closed to the public. We’re still glad we went, because we got to see some cool waterfalls and had a hike of a lifetime! 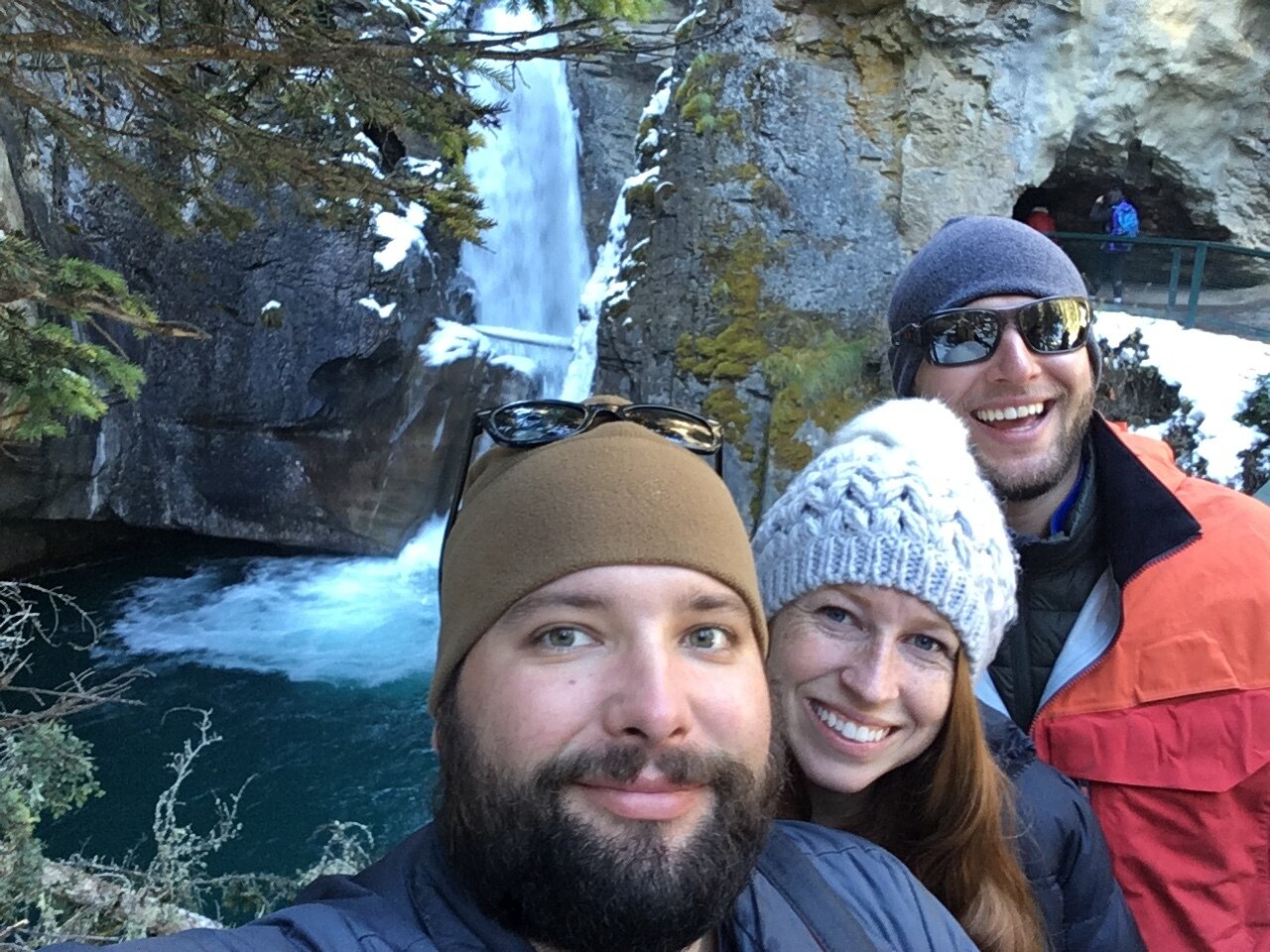 Downtown Banff is like a storybook town. It is the cutest. They have several shops and restaurants to enjoy.

You can book a room here, but remember it’s going to be fairly expensive compared to a bit out of town.

We grabbed some dinner at Tooloulous, which is a cajun seafood and burgers joint that is Louisiana inspired. Then we grabbed some treats from a candy shop on the way out. Don’t forget to grab your best souvenirs from one of the local shops! 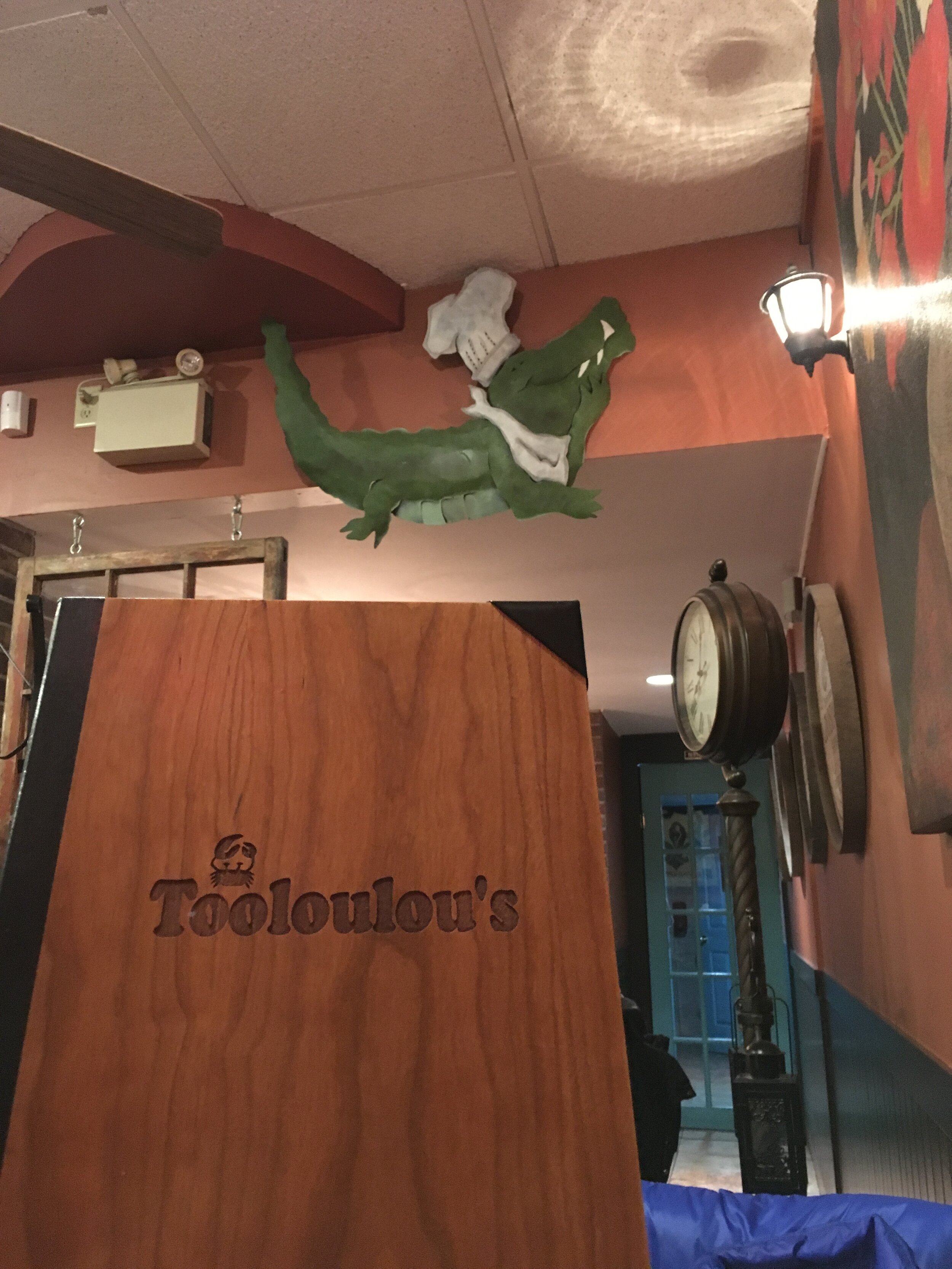 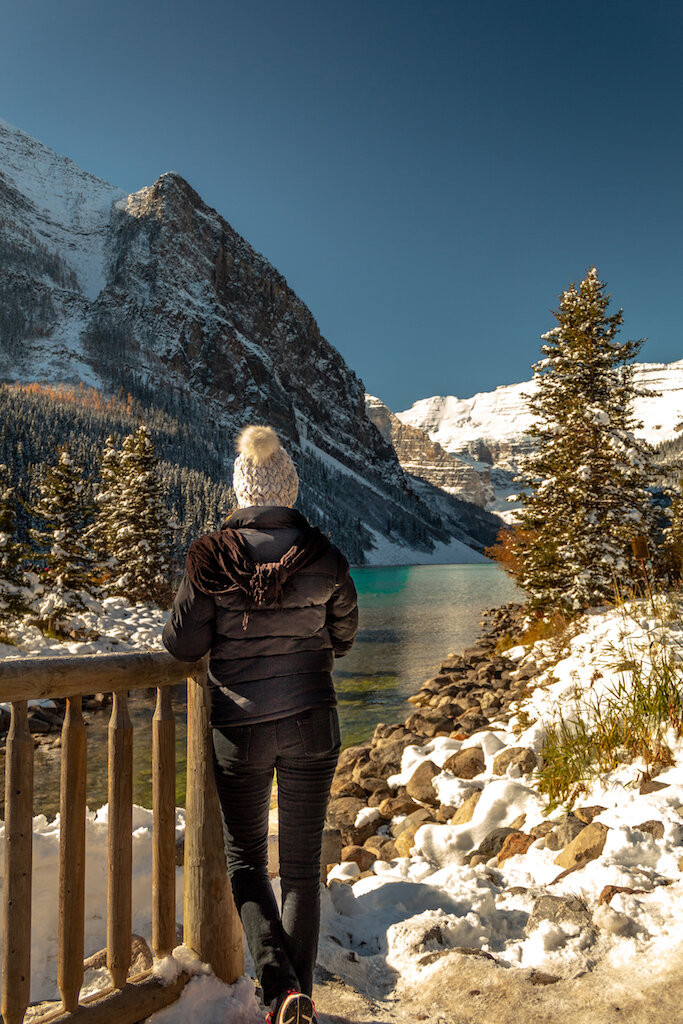 If you have 24 hours to see Banff, do it!! Of course you can spend longer there and take a slower pace, but to be honest, we saw what we wanted in that time. If you have more time, be sure to check out Jasper National Park as well, we’ve heard great things! 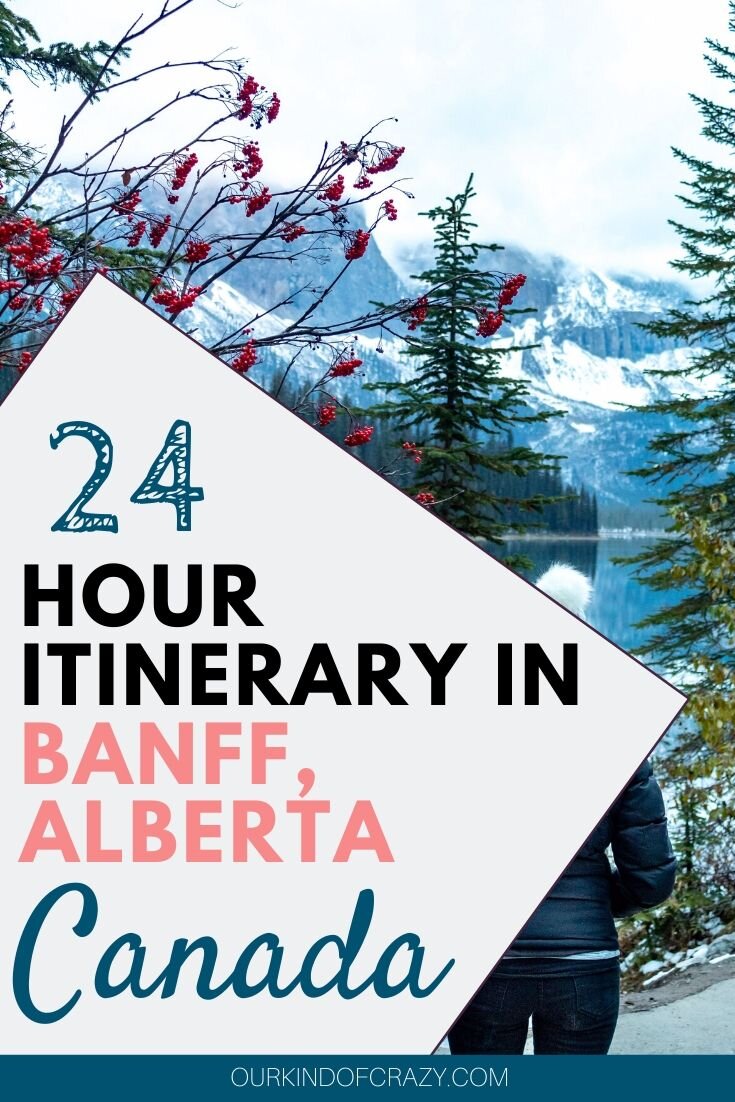 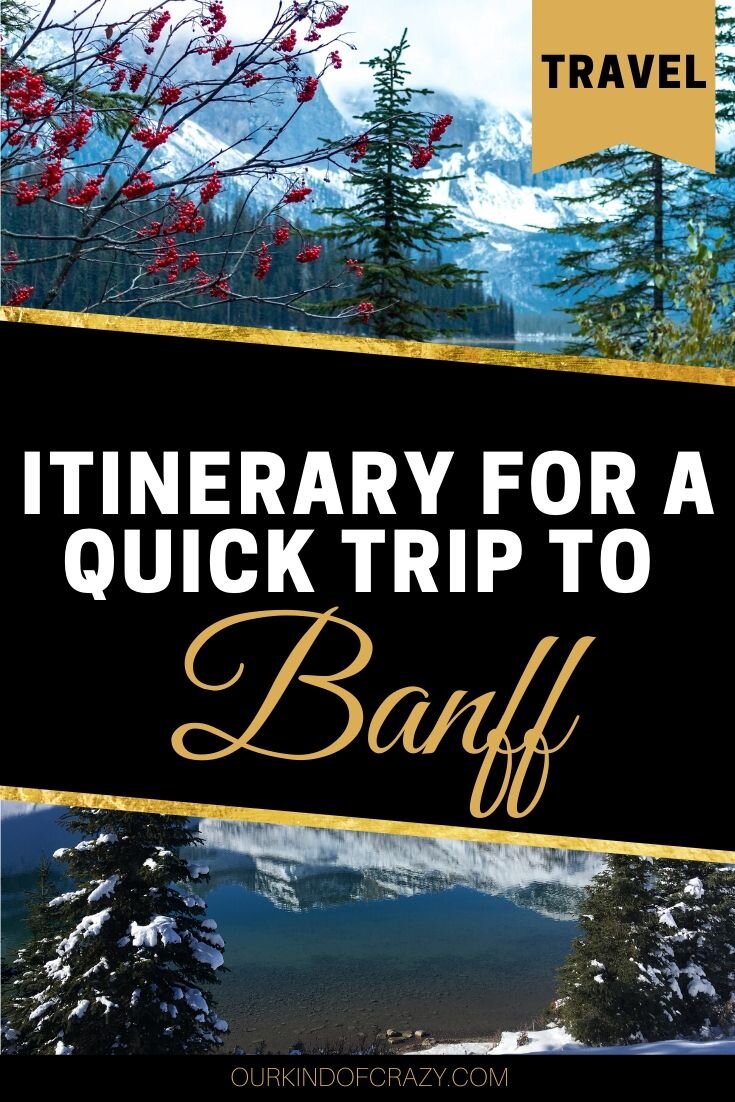 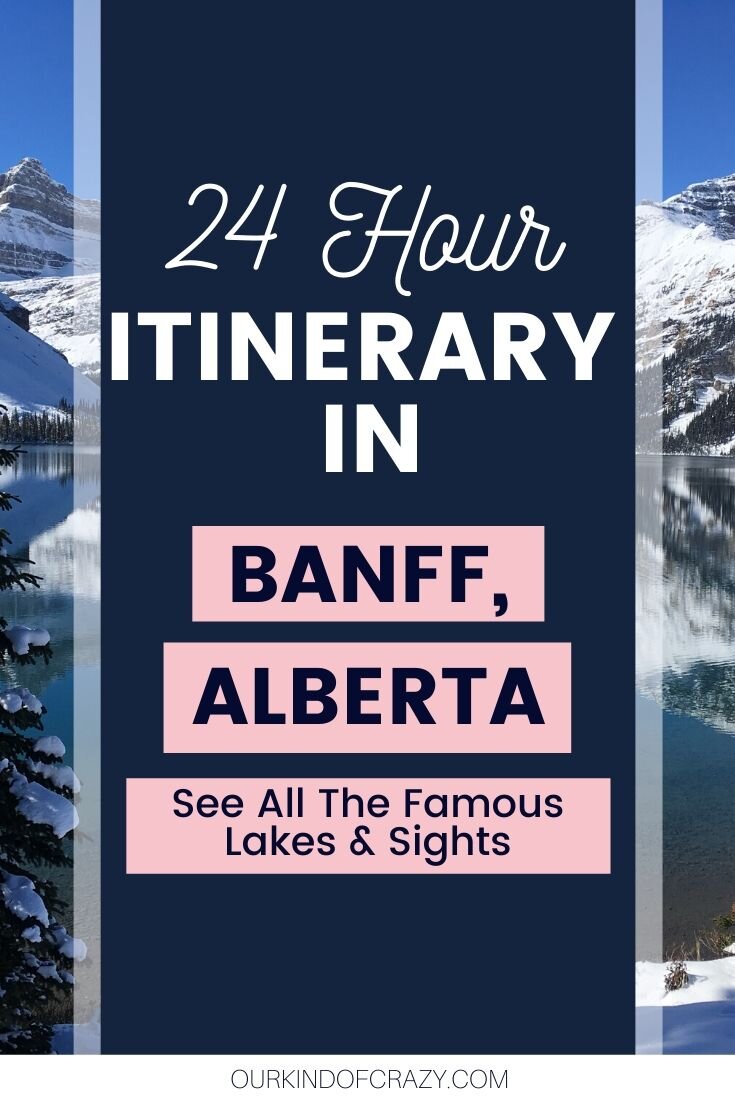